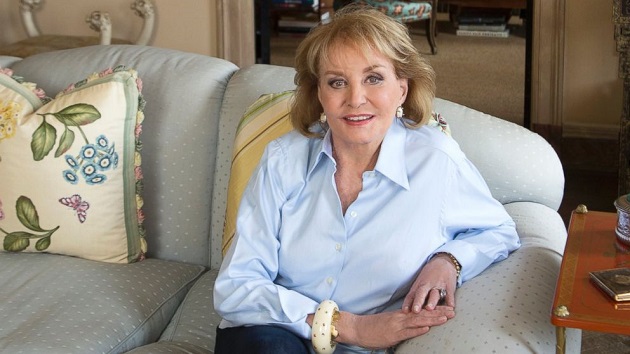 (NEW YORK) — The death of Barbara Walters, a trailblazing TV icon who broke down barriers during her illustrious five decades long career, has led to tributes from her peers and other prominent figures on her life and legacy.

Walters died Friday at her home in New York the age of 93.

The legendary anchor was the first female anchor in evening news in 1976 , won 12 Emmys awards, inducted into the Television Academy Hall of Fame in 1989 after 25 years and launched “The View” in 1997 and interviewed many presidents including Richard Nixon, Ronald Reagan and Barack Obama. She was admired for paving the way for so many journalists.

“So sad to hear of the passing of Barbara Walters. What an honor to share the set with the inimitable trailblazer when I joined @abc2020,” ABC News Senior National Affairs Correspondent Deborah Roberts tweeted.

“Will never forget the phone call when she asked me to join the groundbreaking program,” she added.

“Barbara Walters was a true trailblazer. Forever grateful for her stellar example and for her friendship. Sending condolences to her daughter and family,” “Good Morning America” co-anchor Robin Roberts tweeted.

David Muir, anchor of “ABC World News Tonight”, said that Walters defined what it meant to be an icon.

“So often we toss around the words – icon, legend, trailblazer – but Barbara Walters was all of these – and perhaps above all else, Barbara Walters was brave. She paved the way for so many – we learned from her – and remain in awe of her to this day. RIP, Barbara,” Muir wrote on Instagram.

Diane Sawyer, who formerly anchored “World New Tonight” and used to co-anchor “20/20” on Sundays with Walters shared memories of her time with Walters.

“Barbara was a trailblazer, a singular force who opened the door for every woman in television news,” she said in a statement. “She was also the history maker right down the hall — my friend and road buddy, eager to talk about the news world, the decades of passionate work — the curiosity and laughter that gets us all through. Sadness. Gratitude. And a salute from all of us who know what we owe her.”

Oprah Winfrey credited Walters for making it possible for her own celebrated career.

“Without Barbara Walters there wouldn’t have been me — nor any other woman you see on evening, morning, and daily news. She was indeed a Trailblazer. I did my very first television audition with her in mind the whole time. Grateful that she was such a powerful and gracious role model. Grateful to have known her. Grateful to have followed in her Light,” she wrote on Instagram.

Walters’ influence was felt beyond just the world of media as other figures such as President Joe Biden honored her.

“Barbara Walters has always been an example of bravery and truth — breaking barriers while driving our nation forward. Her legacy will continue as an inspiration for all journalists,” he tweeted, along with a photo of himself and Walters.

“Jill and I send our deepest condolences to her daughter, Jacqueline, and to those who loved her,” the tweet continued.

Barbara Walters has always been an example of bravery and truth — breaking barriers while driving our nation forward. Her legacy will continue as an inspiration for all journalists.

Jill and I send our deepest condolences to her daughter, Jacqueline, and to those who loved her. pic.twitter.com/e5Cl6bsyvA

Sports legends including NBA Hall of Famer Kareem Abdul-Jabbar remembered her as well.

“Barbara Walters never flinched when questioning the world’s most powerful people. She held them accountable. She cared about the truth and she made us care too. Fortunately, she inspired many other journalists to be just as unrelenting. We are all better off because of her,” Abdul-Jabbar tweeted.

SAG-AFTRA President Fran Drescher called Walters, who joined AFTRA in 1954 and SAG in 1991, a pioneer in her field.

“To be the first woman at anything speaks volumes to the strength and character of that woman, but to be the first woman in network news suggests a woman of intellect, tenacity and a fearless ability to uncover, confront and illuminate; in short, the one and only Barbara Walters. She blazed a trail for many other women to follow, who can pursue the possible because Barbara Walters did it first!” Drescher said in a statement Saturday.

Berry Gordy, the founder of Motown, said Walters was in a league of her own.

“Barbara Walters was in a class by herself – a trailblazer and journalist of the highest degree. She was also a dear, dear friend of mine for many years. I will miss her,” Gordy said in a statement Saturday.