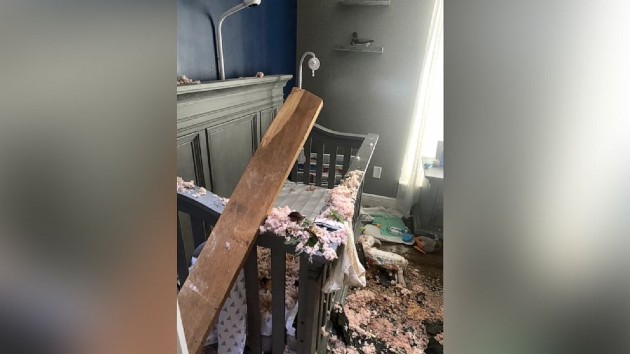 (NEW YORK) — Courtney and Kale Buchholtz had just put their 5-month-old son Cannon to bed and sat down on the couch the night of July 2 when a loud bang shook the walls of their Prairieville, Louisiana, home.

The couple said they thought lightning had struck their house until Courtney Buchholtz looked down at the baby monitor and saw debris flying into Cannon’s room.

Thinking a window had busted open, the couple ran to their son’s room and discovered that instead, a giant oak tree had fallen through the roof.

“When I saw the tree I almost couldn’t even comprehend what was happening, that there was a tree in our house,” Courtney Buchholtz told ABC News’ Good Morning America. “And the thought of it being on top of Cannon, I felt physically ill.”

The Buchholtzes said they heard Cannon crying in his crib, which they took as a good sign that he was at least alive.

Courtney Buchholtz weaved through the debris in the room to pull Cannon out of his crib and handed him to her husband, who checked the infant for injuries.

“I just turned him over and checked him really well to make sure there was nothing wrong with him,” said Kale Buchholtz. “He had been crying, but as soon as I got him in my hands, he was laughing as I was turning him.”

Cannon escaped the incident without a scratch, according to the Buchholtzes, who said he only had to be washed clean of debris from the fallen ceiling.

The family of three quickly evacuated the house and drove to a family member’s nearby home. When Kale Buchholtz returned that night, he found the weight of the tree had destroyed nearly the entire house, aside from Cannon’s crib.

“It was just kind of like a little bubble around him,” he said. “The hallway on one side of his room was where most of the tree was, and around his crib it was just wood and sheetrock and everything else.”

When Courtney Buchholtz re-watched the footage of the tree falling, as captured by the baby monitor app on her phone, she described it as being like there was a “shield” protecting Cannon.

She said she immediately thought of her late son Kasen, who died in 2016, one month after he was born prematurely.

“We always say that he’s watching over his little brother, so my immediate thought was that Kasen was protecting his brother and keeping him safe,” she said. “Losing one child and the thought of anything happening to another child is gut-wrenching.”

The Buchholtzes, who had to rebuild after water flooded their home in 2016, are now trying to salvage whatever they can from their home and prepare to rebuild again.

“It’s been a pain but, you know what, we can deal with that. We’ll clean up a mess any day,” said Courtney Buchholtz, adding, “It could have been so much worse.”

“It makes you realize a house is just a house and the material things can be replaced,” said Kale Buchholtz. “Family is what matters.”