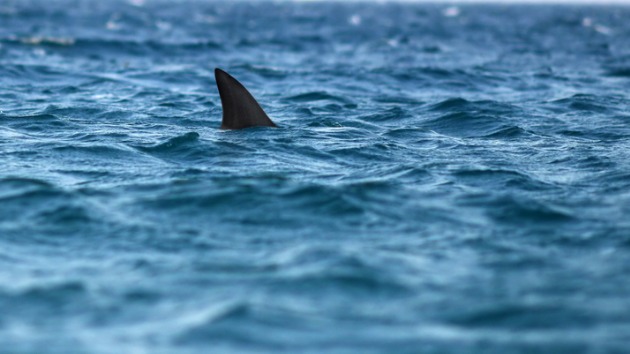 (LOS ANGELES) — Juvenile great white shark populations have been increasingly moving up the California coast as climate change warms ocean waters, according to a new study.

The marine predators typically remain in warmer waters in the Southern California current, but an “unprecedented” number of sightings emerged in central California during the 2014 to 2016 heatwave, and now the sharks have migrated even farther north, the study, published Monday in Nature Scientific Reports, states.

A “dramatic increase” in baby great white sharks has been found off Monterey Bay since 2014, especially in juvenile sharks less than 2.5 meters in body length, according to the study. Small white sharks had been reported in the area prior to 2014, but the presence of juveniles had been “non-existent or extremely rare” before that point, scientists said.

Monterey Bay has always been home to larger great white sharks, but they had never ventured so far north because it was too cold, Dr. Salvadore Jorgensen, Ph.D, research associate at the University of California, Santa Cruz and one of the authors of the study, told ABC News.

The emergence of the juvenile white shark populations was “unexpected, sudden and outpaced established scientific monitoring programs,” the study states.

The baby sharks prefer a “Goldilocks” temperature range of between 60 and 70 degrees, which has shifted about 175 miles north since 2014, Jorgensen said. Through historical records and satellite imagery, the researchers determined that they are tracking a warming ocean, he said.

Juvenile white sharks on the West Coast typically reside in nursery areas off northern Mexico and southern California, and they remain in a “relatively narrow” temperature band, which is a distinct pattern within white shark populations, researchers said. White sharks are “unique” because they are endotherms, mammal-like with warm bodies, and the smaller sharks are unable to maintain the temperature in colder temperatures, Jorgensen said.

The growing migration is signaling the “real danger” of climate change and “the way that oceans are changing so quickly,” he added.

However, although the juvenile sharks have been migrating north, their overall habitat has declined as climate change redistributes marine species and ecosystems, according to the study.

The ecosystem in the Northeast Pacific waters has experienced extreme conditions over the past decade, highlighted by unusually warm conditions from 2013 to 2016, according to the study. In the fall of 2014, a warm mass of surface water, often described as the “Pacific Warm Anomaly” or “the Blob” entered Southern California and created persistent warm waters that endured the El Nino events in 2015 to 2016 and 2018 to 2019, scientists said.

The warming anomalies over multiple years has caused widespread shifts in species, multiple unusual mortality events and impact to commercial fisheries across the region.

In addition, the sharks are the “single greatest mortality source” facing Southern sea otters as reports of strandings of the threatened species with shark bites increase. When the juvenile white sharks bite the sea otters, it is investigative, rather than consumptive, as sea otters and their lack of blubber are not a food source for great white sharks, according to the study.

The shift in shark population is also significant because it can potentially create problems with commercial fisheries, protected species conservation and public safety concerns, according to the study.

It was members of the communities that discovered the uptick of juvenile white sharks in the area, Jorgensen said.

“It was our job as scientists to find out what’s happening,” he added.

Kelly Sorenson, owner of the On The Beach Surf Shop in Monterey, told ABC News that he was surfing with his sons at Del Monte Beach on the south end of Monterey Bay in 2019 when they saw a juvenile shark about 20 yards out. However, he said he was not threatened by the young shark’s presence.

“You’re already aware, swimming in that zone,” he said. “You know, they’re juvenile. As long as mommy’s not out there, that’s fine.”

In May 2020, a surfer was killed in a shark attack about 100 yards off the shore of Manresa State Beach on the north end of Monterey Bay.

Sorensen said that while he believes drones are making the sharks more visible, he is now “more aware” that they’re out there.

“They’re the talk of the town when people see them,” he said.