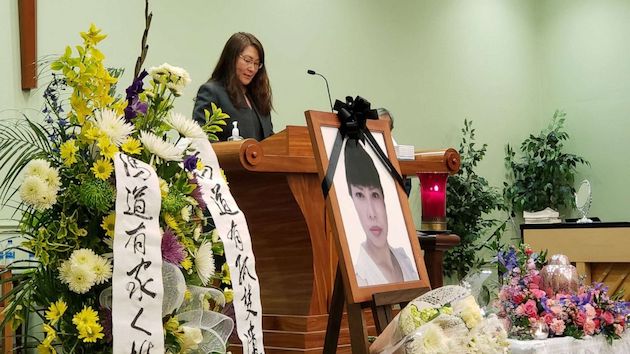 (ATLANTA) — Even as her name became part of a rallying cry to “Stop AAPI Hate” around the country, Daoyou Feng was buried Sunday without any close friends or family members there to say their final goodbyes in person.

The 44-year-old Chinese national was one of eight killed in last month’s mass shooting in the Atlanta area.

Greg Hynson, a longtime customer at Young’s Asian Massage — the first of three businesses attacked that day — said that although he didn’t know her well, he believes she had been working there for only two to three months and that she was always sweet and kind.

Because she had no family in the United States, her funeral was coordinated by a local organization called the Atlanta Chinese American Alliance (ACAA), which had started a crowdfunding page to help pay for the funeral expenses.

Dr. Charles Li, a founding member of ACAA, said about 100 people — many who were strangers — attended the service to pay their respects.

“It was a great feeling seeing this great show of support from people not only from the Chinese American community in Atlanta but also our friends from the Korean American community, who are mourning the loss of their own, too,” said Li, adding that visitors from Alabama and Washington, D.C., also attended the service.

Li said it’s a tradition in the Chinese culture to step up and help those in need.

“You always do that.”

The 44-year-old’s body remained at the morgue for two weeks following the shooting.

Li said Feng’s family only learned of her death after they stopped receiving messages from her. They subsequently alerted the Chinese Embassy in Washington. After confirming Feng’s death, the embassy reached out to Li’s organization to request help.

Feng’s family was unable to attend the funeral in Norcross, Georgia, because of COVID-19 travel restrictions. Still, they wanted to follow a custom practiced in her hometown in China that requires her to be buried where she died, Li said.

Li said he spent nearly two weeks speaking with Feng’s brother in China to learn more about her life prior to the funeral.

Throughout their conversations, Li said he learned that Feng grew up in Liangdong, China, a rural farm town where her parents worked hard to provide for their four children. They were illiterate and never went to school, but invested their small earnings in education so that their children could have better opportunities. But when her father died, Feng was forced to drop out of school and help on the farm. She only made it to the third grade.

The youngest of her siblings and the most headstrong, Feng left home when she was 14 years old and ventured to bigger cities in Shanghai and Guangzhou to make more money, Li said. After working on assembly lines and sewing garments in textile factories, a friend told her there were better opportunities in America and suggested that she move, according to Li.

In 1999, Feng knew little English and had no friends or family in the U.S., yet she packed her belongings and wrote her mother a letter explaining that she was moving to provide a better life and help pull the family out of poverty, Li said.

“Feng knew that her family wouldn’t allow her to go to America because she didn’t speak English and the United States was so far away from home in China, and basically, she didn’t tell her mom she was going. She wrote a letter and that’s it,” Li said Feng’s brother had told him.

“Her family said Feng traveled a lot when she was in America, going to New York City and Los Angeles to find work, mostly at cosmetic salons and massage places… She would send money every two, three months to her mother,” Li said.

Feng was never married and had no children. Her dream was to return home and open her own beauty salon. She planned to move back last year, but was unable to travel because of the pandemic. Instead, she continued to look for better work and ultimately found herself in Atlanta, where she kept in touch with family every day.

“Throughout the conversation with her family, they asked me a tough question: ‘Why. Why did this man kill my daughter?’” Li said. “I can’t come up with an answer so I just told them she was in the wrong place at the wrong time.”