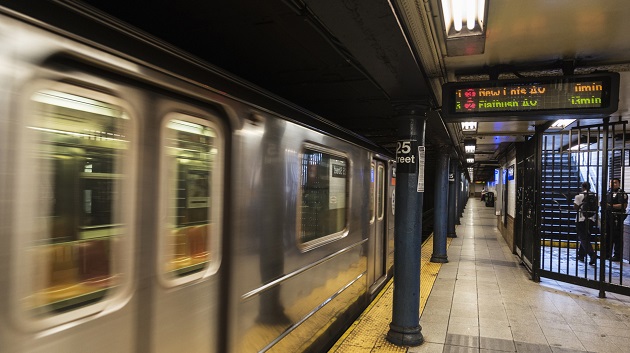 Authorities arrested four suspects ranging in age from 17 to 19, and accused them of stabbing, slashing or punching the victims.

A 44-year-old man was taken to Bellevue Hospital and is in stable condition after he was slashed in the face on a southbound subway train at around 4:25 a.m.

Minutes later, another 44-year-old man was slashed in the back of the head in a robbery. The victim was taken to Lenox HealthPlex.

None of the victims sustained life-threatening injuries.

At least one more suspect may still be wanted, according to New York City Police Department Commissioner Dermot Shea.

Police said the alleged attackers remained on board the train as each victim ran off, and that they are looking into whether the attacks were part of a gang initiation.

A fifth incident also occurred Friday morning, but it was not immediately connected to the pattern.

Train service was impacted as police conducted an investigation at Union Square. Since then, the southbound 4 and 5 express service has resumed from 14th Street-Union Square to Brooklyn Bridge-City Hall.

The latest attacks come after four people, including an MTA employee, were attacked in the New York City subway system in the span of three hours Wednesday morning.

“The responsibility for these vicious attacks does not fall on an already strapped police department — it falls on City Hall and the individuals who are taking advantage of the mayor’s negligence on the issue. If he needed a wake-up call, this is it. Enough is enough,” New York City Transit Interim President Sarah Feinberg said in a statement Friday.

Mayor Bill de Blasio’s spokesperson Bill Neidhardt issued a response, pointing out that over 3,000 officers are on the transit force.

“The city has pulled cops off desk duty and put them on platforms and trains. We’re going to keep putting massive resources into this fight to keep our subways safe. Meanwhile, the MTA sends out statements that point fingers and talk about mayoral politics. Get with the program. Help us fight back this crime,” Neidhardt said.