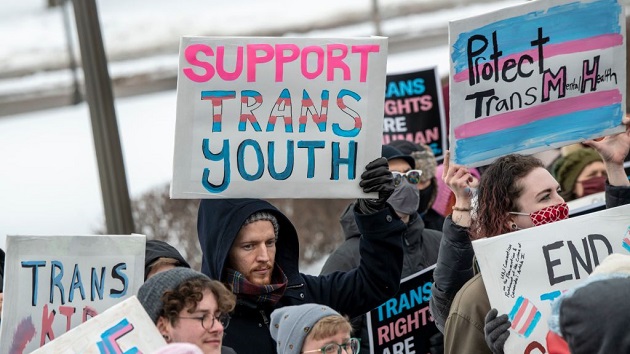 (NEW YORK) — At least 19 states plan to offer legal refuge to transgender youth and their families displaced by anti-LGBTQ legislation that criminalizes the families and physicians of trans children.

She went on, “We are using the collective power of LGBTQ state legislators all across the nation to launch a counter-offensive that aims to protect trans kids and parents while also demonstrating that there is a positive agenda for trans people that lawmakers can support.”

These investigations have been halted after a family sued the state alongside the American Civil Liberties Union and Lambda Legal.

He signed SB 184, the Vulnerable Child Protection Act, which states that anyone who provides gender-affirming care — including puberty blockers, hormone therapy or physical gender-affirming surgeries — to an individual under age 18 could be convicted of a felony, face up to 10 years in prison and be fined $15,000.

To combat such efforts, a bill from California state Sen. Scott Wiener aims to make California a legal safe haven for parents who may have their transgender children taken away from them or be criminally prosecuted for providing care for their children.

“Starting with our legislation in California, we are building a coordinated national legislative campaign by LGBTQ lawmakers to provide refuge for trans kids and their families,” said Wiener. “We’re making it crystal clear: we will not let trans kids be belittled, used as political pawns and denied gender-affirming care.”

He has joined forces with LGBTQ advocacy groups from all over the country, including Victory Institute and Equality California.

“Parents should not live in fear of being hunted down by the government for loving and supporting their child,” said Tony Hoang, executive director of LGBTQ advocacy group Equality California.

He continued, “As a native Texan, I’m ashamed of Gov. Abbott’s hateful attacks against trans kids and their families. But as a Californian, I’m so proud of our state for serving as a beacon of hope and a place of refuge for those children and their parents.”

According to the Human Rights Campaign, there have been more than 300 bills targeting the LGBTQ community nationwide in 2022.