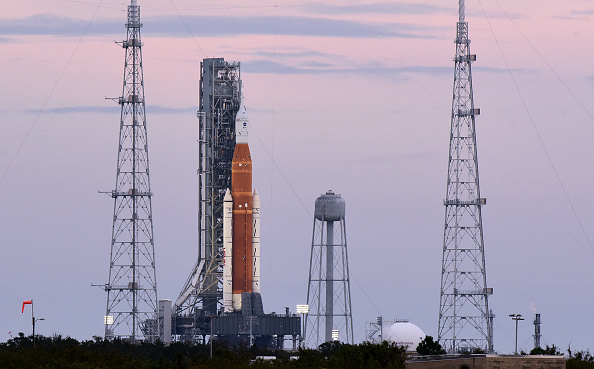 (CAPE CANAVERAL, Fla.) — The Artemis I rocket is set for launch early Wednesday morning, the latest attempt to send an unmanned capsule near the moon after a series of postponements due to weather and mechanical issues.

NASA pushed back a takeoff scheduled for Monday after Hurricane Nicole made landfall about 85 miles south of Cape Canaveral, Florida.

The launch marks the first step in an ambitious plan to establish a long-term presence on the moon for scientific discovery and economic development. Eventually, the Artemis expedition could lead to the first crewed space trip to Mars, according to NASA.

NASA has reported a “small leak” ahead of the Artemis launch.

“Engineers have paused flowing liquid hydrogen into the core stage because of a small leak on a hydrogen valve inside of the mobile launcher,” NASA said. “A team of personnel called a red crew is being assembled to go to the pad to make sure all of the connections and valves remain tight. The valve is located within the base of the mobile launcher.”

The Artemis launch will take place early Wednesday morning, unless NASA postpones the takeoff due to weather or other concerns.

NASA will broadcast the launch on NASA TV.

The weather is currently at 90% favorable for the Artemis launch early Wednesday morning, according to NASA’s Exploration Ground Systems.

The Artemis launch on Wednesday kicks off a yearslong expedition that aims to put astronauts on the moon and enable a future trip to Mars.

The Artemis expedition includes four missions, each of which will cost roughly $4.1 billion. In all, the project will cost up to $93 billion by 2025, according to an audit from the NASA Office of the Inspector General.

Over the course of the Artemis missions, NASA plans to eventually send the first female astronaut and the first astronaut of color to the moon.

The Artemis mission has suffered a series of setbacks since an original launch date in late August that was expected to feature Vice President Kamala Harris in attendance among about 100,000 spectators.

NASA called off that initial takeoff, set for Aug. 29, after a defective sensor prevented one of the rocket’s engines from cooling down to a temperature required before ignition.

Days later, a second launch attempt on Sept. 3 was scrubbed after the space agency identified a liquid hydrogen leak.

A third planned launch attempt, on Sept. 27, faced postponement due to Hurricane Ian. The rocket was moved off the launchpad to protect it, as Ian wrought destruction along its path northward from Florida to the Carolinas.