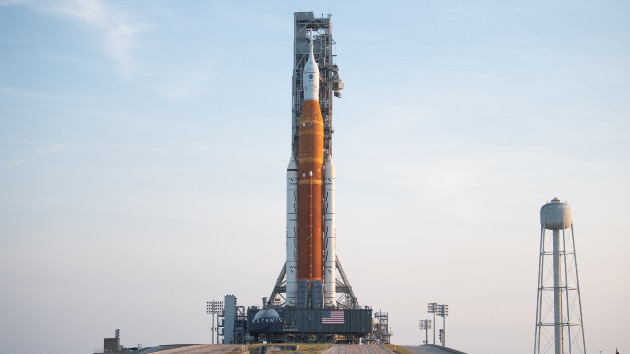 (NEW YORK) — NASA kicked off Monday its plan to send an unmanned space capsule into the moon’s orbit, marking the initial launch in an ambitious plan to establish a long term presence on the moon for scientific discovery and economic development.

The space capsule, called Artemis I, will travel for roughly 40 days — reaching as close as 60 miles from the moon, and then 40,000 miles above the moon when orbiting over its dark side — before landing in the Pacific Ocean off the coast of San Diego.

After the launch was scrubbed, the next attempt will occur Sept. 3.

Sep 02, 9:32 AM EDT
Artemis still on track to launch Saturday

NASA officials announced Friday that Artemis I is still on track to launch Saturday afternoon between 2:17 p.m. ET and 4:17 p.m. ET.

Melody Lovin, launch weather officer at the U.S. Space Force, said the weather forecast is currently a 60% go overall and 80% toward the end of the two-hour window, If the launch needs to be delayed until Monday, the forecast is a 70% go.

“I do not expect weather to be a showstopper by any means for either launch window,” she said.

The Artemis I launch attempt is still planned for Saturday from 2:17-4:17 p.m. ET, NASA officials said during a press conference Thursday.

“We’re comfortable with our risk posture,” Artemis mission manager Mike Serafin said. “That said, there’s no guarantee that we’re going to get off on Saturday, but we’re going to try.”

Sunday is no longer a backup option because the spacecraft would fly into an eclipse scenario, which would not allow it to get the power it needs from the sun.

If the launch is Saturday, the mission will be 37 days long, with the splashdown on Oct. 11, Serafin said.

NASA officials said the Artemis I new launch date that was initially scheduled for Friday had to be moved due to bad weather.

The weather is 60% no go for Friday but looks to be more favorable Saturday.

“Looking forward to Saturday, weather would be a little bit different than what we experienced yesterday,” Mark Berger, launch weather officer with the U.S. Space Force’s 45th Weather Squadron, said during a media briefing Tuesday. “We will have a fairly strong onshore flow, and so that does favor showers and possibly a few thunderstorms moving in from the coast during the morning and early afternoon hours.”

He added, “I’m optimistic that we’ll have at least some clear air to work with during the afternoon to count on Saturday.”

If the launch does not occur by Monday, Artemis I will have to roll back to the Vehicle Assembly Building and won’t be able to launch until later in September.

This is because the flight termination batteries, which allow Artemis to be blown up if it veers off course, run low after 25 days.

The issue with an engine on Artemis I that led to the launch on Monday being scrubbed may not have been an engine issue at all.

NASA officials said Monday that engine three did not chill down to a temperature of 500 degrees Rankine, or 40 degrees Fahrenheit, which is needed for ignition, compared to the other three engines.

However, John Honeycutt, manager of the Space Launch System Program from Marshall Space Flight Center, said the problem may have actually come from a faulty sensor, rather than the engine not cooling down enough.

“I think we’ve got enough data to put the story together but we’ve still got to go put the pieces together,” Honeycutt said Tuesday.

NASA officials announced Tuesday that they’ve moved the launch of Artemis I to Saturday.

Mike Sarafin, Artemis mission manager, told reporters during a media briefing that the mission management team met earlier in the day and agreed on the new date.

“We agreed on what was called option one, which was to operationally change the loading procedure and start our engine chill down earlier,” he said.

One of the reasons for the scrub on Monday was because engine three did not cool down enough to the point needed for ignition, he explained yesterday.

NASA Administrator Bill Nelson said it’s normal for launches to be scrubbed after the Artemis I launch was delayed Monday for multiple reasons.

“I am very proud of this launch team. They have solved several problems along the way and they got to one that needed time to be solved,” he told reporters.

“I want to say, understand that scrubs are just a part of this program on the space flight,” Nelson said.

Nelson spoke about the seventh mission of Space Shuttle Columbia, which he flew in January 1986.

“We scrubbed four times on the pad,” Nelson said.

He added, “It was the better part of a month and, looking back, after the fifth try got off to a perfect mission. It would have not been a good day had we launched on any one of those four scrubs. So when you’re dealing in a high-risk business and spaceflight is risky, that’s what you do.”

Aug 29, 2:11 PM EDT
Engine does not need to be replaced on Artemis, NASA says

NASA officials said there is no sign one of the engines needs to replaced on the Artemis I rocket after the launch was scrubbed.

During a media briefing Monday, Mike Sarafin, Artemis mission manager, told reporters engine three did not cool down enough to the point needed for ignition.

“Do we need to remove and replace an engine? There is no indication we are at that scenario at this point,” he said.

NASA officials on Monday offered more details behind the decision to postpone the Artemis I launch.

Mike Sarafin, Artemis mission manager, explained engine three was not cooling down enough to the temperature needed before ignition.

“I don’t recall exactly where the engines were but engines one, two and four were pretty close to that. Three was not getting there,” he told reporters during a media briefing Monday afternoon.

Sarafin said there were other issues earlier in the day including tanking — filling the rocket with liquid oxygen and liquid hydrogen — being delayed for about an hour after the Kennedy Space Center went into a lightning alert as well as a hydrogen leak, although both were resolved.

“So the combination of not being able to get engine three to reach chill down and then the vent valve issue that they saw at the inner tank really caused us to pause today and we felt like we needed a little more time,” he said.

Sarafin added that he is hopeful about the second launch opportunity on Sept. 2.

“There is a non-zero chance we have a launch opportunity on Friday,” he said.

“But we need time, we really need time to look at all the all the information, all the data and, you know, we’re gonna play all nine innings here and we’re not ready to give up yet,” Sarafin continued.

NASA Administrator Bill Nelson said it’s normal for launches to be scrubbed after the Artemis I launch was delayed Monday for multiple reasons.

“I am very proud of this launch team. They have solved several problems along the way and they got to one that needed time to be solved,” he told reporters.

“I want to say, understand that scrubs are just a part of this program on the space flight,” Nelson said.

Nelson spoke about the seventh mission of Space Shuttle Columbia, which he flew in January 1986.

“We scrubbed four times on the pad,” Nelson said.

He added, “It was the better part of a month and, looking back, after the fifth try got off to a perfect mission. It would have not been a good day had we launched on any one of those four scrubs. So when you’re dealing in a high-risk business and spaceflight is risky, that’s what you do.”

Vice President Kamala Harris praised the NASA team behind the Artemis I mission after the launch had to be scrubbed Monday due to an engine problem.

Harris and second gentleman Doug Emhoff had been visiting the Kennedy Space Center before the launch was postponed.

The scrubbed launch was “about showing the great work that happens here,” Harris told reporters.

“These exceptional public servants, these exceptional skilled professionals who have the ability to see what is possible and what has never been done before. How exciting is that?” she said.

According to a White House official, Harris and Emhoff will continue with their visit under a revised itinerary.

“She met with astronauts at NASA Operations Support Building II and will proceed to a tour of Artemis II and Artemis III hardware as planned. The Vice President will gaggle following the tour and then depart,” the official said.

NASA Administrator Bill Nelson defended the scrubbing of the Artemis I launch, saying the launch shouldn’t take place until the team is sure it’s ready.

“We don’t launch until it’s right,” he said during an interview on NASA TV Monday morning.

“There are certain guidelines. And I think it’s just illustrative that this is a very complicated machine, a very complicated system, and all those things have to work, and you don’t want to light the candle until it’s ready to go,” he said.

Nelson said the engineers will continue to “stress” and “test” the rocket to make sure it’s ready by the next attempt, which is Sept. 2.

Earlier in the day, Nelson had welcomed several Biden administration officials, including Vice President Kamala Harris and second gentleman Doug Emhoff, to the Kennedy Space Center ahead of the launch.

He said the vice president has been briefed and the White House will continue to receive regular updates.

NASA announced a few minutes after Artemis I was initially scheduled to lift off that the launch has been scrubbed.

Engineers said the problem came from a liquid hydrogen line that was not chilled enough inside one of the rocket’s four core-stage engines, which needs to occur before they can be ignited.

The next attempt will occur on Sept. 2.

Artemis I will likely not be launching at 8:33 a.m. ET as originally planned after NASA ran into several delays in its preparation to send it into space.

The process of tanking, which includes filling the rocket’s core stage with liquid oxygen and liquid hydrogen, was delayed due to some passing storms and lightning in the area, NASA said.

Moreover, a leak was discovered in the hydrogen fuel line, which NASA quickly resolved. The leak concentration was “at an acceptable level,” NASA said.

Engineers also discovered a potential crack in the inner stage flange, which connects two of the rocket’s cylinders.

The countdown clock is currently paused at T-40 and the launch can go as late as 10:33 a.m. ET If that window passes, the next attempt at launch will be Sept. 2.