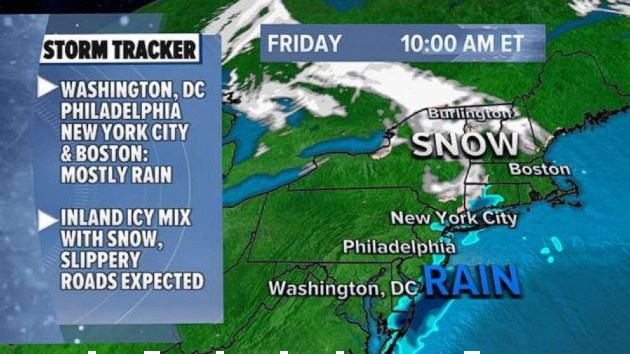 (NEW YORK) — A storm moving across the country brought up to a foot of snow Thursday in the Midwest and winds which gusted at over 50 mph, creating blizzard conditions.

In Iowa, 3 to 6.5 inches of snow with gusty winds produced a ground blizzard — which means snow was not falling, but rather blowing around on the ground.

In Chicago, 2 to 3 inches of snow fell very quickly Thursday afternoon, which slowed down traffic.

The storm is now moving through the Northeast with mostly rain for the I-95 corridor from Washington, D.C., to Boston.

As of Friday, some snow and icy mix has been reported in upstate New York and into northern New England, where some areas could see a few inches of snow this weekend, making roads slick.

A combination of Arctic air mass and a new storm will bring more snow to the Midwest and possibly the Northeast this weekend. Some areas will experience the coldest air of the season.

Parts of Wisconsin and Michigan will likely get 6 to 12 inches of snow over the weekend, which could cause dangerous driving conditions.

As of Friday morning, 22 states, from Washington to North Carolina, are under snow and cold alerts.

The Central U.S. will likely see wind chills in the 30s, 40s and 50s below zero this weekend.

This will be the coldest air in two years for some.

Another storm will then try to move across the country and could become a nor’easter for the East Coast.

At this moment, it does not look like a major storm, and most Northeast cities will just get some cold winds with maybe a few inches of snow on Sunday.

This weekend the heaviest snow will be in the Rockies and the Plains, where more than a foot of snow is possible.

Additional snow (possibly half a foot) is expected in the Midwest, from Iowa to Michigan. Most of it will fall near the Great Lakes.

The Northeast will likely see just a few inches on the I-95 corridor, but the heaviest snow will be the lake-effect snow from Buffalo to Watertown, New York.