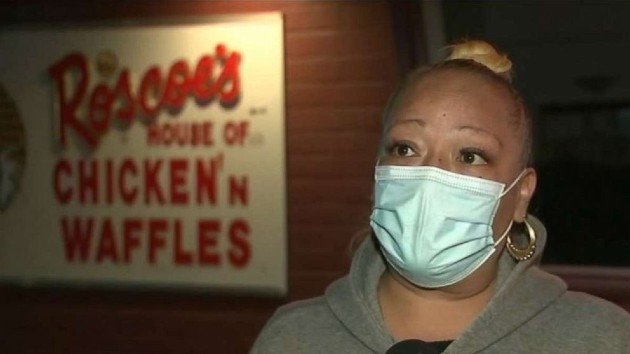 (LOS ANGELES) — A man who was denied service for not wearing a mask at a fried chicken restaurant allegedly returned with a gun and held up the kitchen before robbing them of fried chicken and waffles.

The incident occurred Wednesday at approximately 5:37 p.m. at Roscoe’s House of Chicken and Waffles in Pasadena, California, according to ABC News’ Los Angeles station KABC-TV.

KABC said that, according to police and restaurant officials, the suspect initially walked into Roscoe’s to order food but was denied service by the staff because he was not wearing a mask. Employees informed him that he could return to get food once he was wearing one.

The man then left the restaurant and did indeed return, but this time he showed up at the back of the establishment with a gun.

“He comes straight toward me with a gun, pointing at me and saying put all the chicken in the bag,” cook Robert Gonzalez, who was working in the kitchen when the suspect walked in, told KABC in an interview after the incident.

Manager Angela Prieto said he didn’t take or demand any cash from the restaurant — only chicken and waffles.

“He didn’t take any cash,” manager Angela Prieto said. “He actually took chicken and before he walked out the door he took syrup for his chicken.”

Prieto told KABC that the whole incident, while amusing in hindsight, was terrifying while it was happening.

“They were feeling scared, especially my cashier,” Prieto said. “She was very, very scared. And when I first talked to her she was basically hysterical, but after a while she calmed down and started laughing about it because she realized all he did was take some chicken.”

In an ironic twist, surveillance cameras were able to capture images of the man’s face due to the fact that he was not wearing a mask.

According to the Los Angeles Times, the suspect is described as “a Black man in his 30s or 40s with a thin build, black curly hair, hazel eyes and tattoos on his neck and face … He was last seen wearing a green sweater and white sweatpants with black polka dots. His companion was described as a Latino man with a shaved head, standing between 5 feet 4 and 5 feet 5 and weighing about 150 pounds.”

Nobody was injured in the incident but the man who robbed the establishment is still at large.

“I almost got shot over stupidity, I guess,” said Gonzalez to KABC.