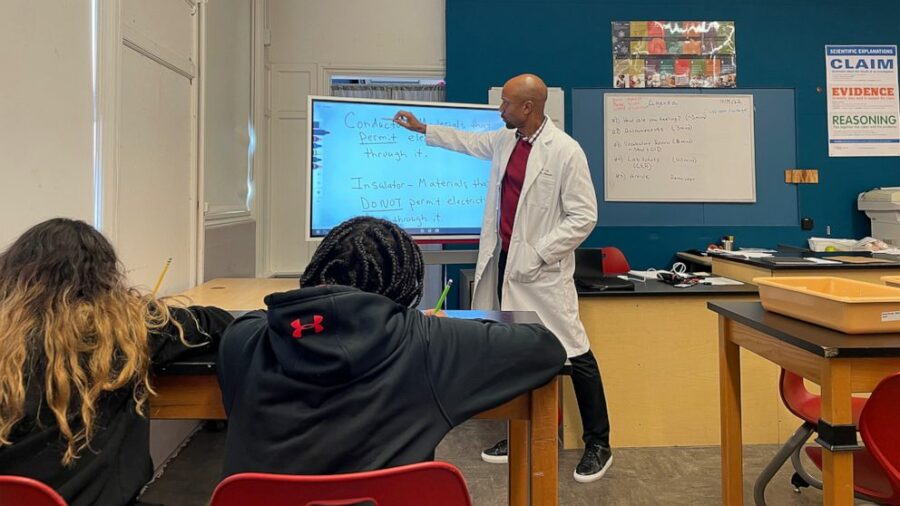 “You have to be that type of teacher now,” Burton Jr. told ABC News, adding, “It’s never a dull moment. I don’t know of a teacher that’s not tired when they leave from just the daily work — the daily grind.”

The advanced, professionally-certified vocal music instructor has taught everything from special education to English language arts over the past three school years because he said a nationwide teacher shortage has forced him in different directions. Burton Jr. said he’s “totally exhausted” most evenings when leaving Drew-Freeman Middle School in Suitland, Maryland, driving to pick up his three sons in Temple Hills before commuting another half an hour home to Brandywine.

This is not unusual for pandemic-era teachers. Many have cited burnout and stress as primary issues amid COVID-19. The National Center for Education Statistics’ (NCES) 2022 School Pulse Panel reported 42% of all principals — not just those with current vacancies — said that teachers and staff leaving the profession became a “more pressing concern” during the last school year. And as schools with large numbers of minority students are suffering the worst staff shortages, NCES found about four in 10 schools with more than 75% minority populations, like Drew-Freeman, have multiple teaching vacancies.

But educators like Burton Jr. who spoke with ABC News this year described conditions that stretched beyond the pandemic in which Black male teachers were under-appreciated and outstretched — with their numbers dwindling in the wake of what one advocate, speaking of staffing, has called a “five-alarm crisis.”

“I really feel like we’re skipped over — point-blank, period,” Burton Jr. said. “The way that the [education] system is laid out, I am always looked to as a disciplinarian, as the one that has the classroom management skills, as the one that is, you know, kind of firm footed,” he added.

Despite the current National Teacher of the Year honor going to Kurt Russell, a Black male history teacher in Ohio, who said the teacher workforce should look more like the demographics of the student population, the shortage of Black men in the profession has been evident for years. NCES’ National Teacher and Principal Survey from 2017-2018 found Black men make up less than 2% of the nation’s teachers.

Dr. Travis J. Bristol of the University of California, Berkeley, said the numbers do not appear to be trending in a positive direction.

“Often, people talk about the 1.9 [but] that number has fallen slightly: 1.7% of all U.S. public school teachers are Black men,” Bristol told ABC News.

Bristol pointed to what some researchers have called the “cradle to carceral” pipeline — from birth to prison or government-backed punishment — as one of the main hurdles for Black boys who could become teachers, because Black children have been disproportionately suspended and expelled since preschool, according to the Department of Education’s Office for Civil Rights, with boys receiving more than 75% of out-of-school suspensions.

Bristol believes that stark picture is often a reflection of society and has shrunk the pool of candidates.

“The Black male teacher shortage will end when we as a country begin to learn how to love Black boys,” said the associate professor of teacher education and education policy at the University of California’s School of Education. He added: “You can’t recruit people or create pathways for people in the profession until we stop suspending and expelling them before they even have an opportunity to enter the profession.”

Diversifying the school workforce has tangible benefits on instruction as well as representation, according to analyses. The National Bureau of Labor Economics found Black boys are more likely to graduate high school and enroll in college when taught by at least one Black teacher in elementary school, but NCES’ survey on public school experiences with COVID-19 showed nearly 70% of principals reported too few candidates as the biggest challenge to hiring teachers for the 2022-2023 school year.

Education Secretary Miguel Cardona has announced several strategies to aid in the shortage by supporting teachers with $285-plus million in grant competitions this fiscal year.

“We are treating our efforts to recruit, prepare, and retain a talented and diverse educator workforce with the same level of urgency we brought to reopening our schools during the height of the pandemic,” Cardona said in a statement this fall.

Sharif El-Mekki, the founder and CEO of the Center for Black Educator Development (CBED), who co-founded the Black Male Educators for Social Justice fellowship to inspire new generations of Black men to work for social justice through teaching, hopes school communities hire educators with varied cultural backgrounds and experiences who come from the communities that their students live in.

But El-Mekki told ABC News he sees the bleak number of Black teachers as an “engineered” byproduct of the Supreme Court’s famous 1954 Brown v. Board of Education decision, when the justices found that racially segregating children was unconstitutional in public schools. Response to the historic integration case paradoxically pushed thousands of Black teachers out of their classrooms and harmed the Black male teacher, El-Mekki said.

“The impact of Brown v. Board is multi-tiered,” El-Mekki explained. “The interpretation of Brown v. Board was even more damaging. The idea that it promoted — that in order for a Black child to have excellence, it had to be in proximity of whiteness — automatically erases a Black educator.”

“[Brown] was about having Black children have access to the resources that supported public education at the level it was being supported for white children,” according to Dr. Leslie T. Fenwick, dean emerita and professor of education policy at Howard University.

Fenwick’s book “Jim Crow’s Pink Slip: The Untold Story of Black Principal and Teacher Leadership” recounts how the Supreme Court decision was met by a fierce, mostly Southern “white resistance” from lawmakers, elected officials, superintendents and other constituents in 17 states — from Virginia to Texas — which fueled the exit of 100,000 Black teachers and principals.

But Fenwick argues that Black male educators’ flight was not an unintended consequence of the case. Rather, it was a result of opposition to the “law of the land.”

Fenwick praised the Brown decision and its intentions for education in America, but she said the nation’s public schools have yet to recover from that segregationist strategy.

“Brown never meant close all the Black schools and shuffle Black students into previously segregated all-white schools, but that was one of the strategies used to resist the intention of the law,” she said. “We’re still living with the aftermath of this history. The history began the cycle and then there are other barriers that have continued to exacerbate the problem.”

Additionally, experts told ABC News that schools utilized Black male educators, particularly principals at all-Black institutions, in abundance before integration occurred. They said men were the predominant figures in U.S. principalship for decades. Today, Black men are just under 4% of the nation’s principals compared to white men who make-up more than a third. Women didn’t start to lead schools at higher rates until the 1990s, the experts said, and white women are the largest demographic, according to NCES data.

Teaching, though, has been widely viewed as a caretaking profession with unfair compensation, advocates told ABC News. In fact, the Economic Policy Institute (EPI), which lobbies on behalf of the needs of low- and middle-income workers, found the relative pay gap between teachers and similarly educated non-teachers hit a “record” high in 2021.

Meanwhile, the Teacher Salary Project has sought to raise awareness around underpaying educators. Board President Ellen Sherratt said that if teaching becomes a financially viable profession, it will help recruitment, retention and diversity.

Still, Bristol’s quantitative study looking at two different sets of Black men working within the same Boston school district found that retention is a lingering problem. The first set studied Black men who were the only Black male educators at their school, and the second set studied those who had at least three other Black men working at the same school.

The study found one of the biggest challenges has been retaining the Black men teachers who are surrounded by others because they are typically placed at schools that face greater difficulties and there are fewer chances to succeed.

“The ones who were concentrated in the most challenging schools were leaving because of the working conditions,” Bristol said. “They [Black males] didn’t have opportunities to teach the way that they wanted to teach and their principals were not supportive of them,” he said.

Eighteen years in, Burton Jr. remains an educator because he sees himself in the Black boys who attend his school located in the predominantly Black Prince George’s County — which has the highest African American population in the state — according to the 2021 U.S. Census.

“All they need, really, they need education and they need a mentor,” Burton Jr. said. “And I see that we’re not providing the resources, the care to them that they need to be what — I would think — America needs.”

Washington, D.C., STEM teacher Jonté Lee serves as a mentor to the Black boys at Whittier Elementary. Entering the final stretch of his 11-year career, some parents have asked Lee, who focuses on science, technology, engineering and math, to take their son under his wing.

After a parent-teacher conference this fall, Lee told ABC News he was experiencing “mentor overload” from the educator shortage. He called the pandemic burnout “unfair” because each year there has been the same workload but not enough workers.

“You are expecting a certain type of Black male mentor, a Black male figure — somebody — where?” Lee said. “I didn’t even know the number dropped to 1.7 [percent]. Look at where we are now. Where are we going to find them?”