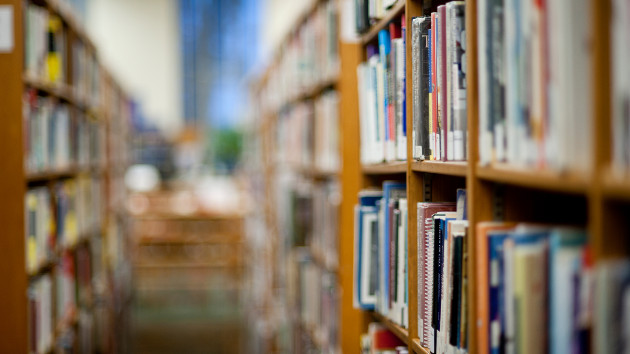 (NEW YORK) — As cultural debates over access to books rage on in school districts across the country, a Republican lawmaker in Virginia is hoping to make it easier for parents to control what their children read in public school libraries.

“In school libraries across the Commonwealth, there are books that are in the libraries that are extremely sexual in nature,” Virginia delegate Tim Anderson told ABC News.

“We have to give parents more authority over the schools and what their children have access to while they’re in the schools,” he added.

Anderson, a Republican who represents parts of the cities of Norfolk and Virginia Beach, said that he plans to introduce a bill that would identify titles that contain “sexual content” and implement a rating system for library books that would essentially be based on the Motion Picture Association film rating system. Books would be marked with “Parental Advisory Warning” labels and parents would be able to opt their children out of reading books with a particular rating.

He said titles would be rated from G, appropriate for all audiences, to R, which restricts content to children under 17 years of age. If a child is 17, they can access the content with the supervision of a parent or guardian.

“This puts parents back in the driver’s seat,” Anderson said of his proposed legislation.

Anderson, an attorney, filed a lawsuit in May that attempted to stop Barnes & Noble bookstores from selling books that contain sexual content to children. The lawsuit, which was dismissed last month by a Virginia Beach Circuit Court judge, named graphic novel Gender Queer and A Court of Mist and Fury — two books that have been challenged or banned in various school districts across the country.

According to ABC affiliate in Hampton, Virginia, WVEC-TV, Judge Pamela Baskervill dismissed the case because Virginia law doesn’t grant circuit courts authority to determine if a book is obscene to minors.

Anderson said that since the lawsuit failed, he is now “looking for a legislative fix.”

“I’m concerned about this subset of parents who think that they can legislate what children are reading, and whose children get to read these materials,” Hashmi said. “Overwhelmingly, the books that we see targeted are by authors of minority communities or by LGBTQ authors. And it is unfortunate that they continue to push their particular perspective onto other families.”

Yael Levin-Sheldon, a parent in Virginia and chief communications officer of No Left Turn in Education, told ABC News that the nonprofit organization is part of a nationwide coalition advocating for a rating system and “fully supports” Anderson’s proposal.

“We are staunch believers in the First Amendment and the right of parents to direct the upbringing of their children,” Levin-Sheldon said. “Appropriately labeling books based on content, just as is done with movies, is a commonsense way to allow parents to decide what books are acceptable for their own children, without imposing their standards and values on other parents and their children.”

Books have been banned in at least 26 states and 86 school districts, with at least seven in Virginia, according to PEN America, a nonprofit organization working to advance freedom of expression through literature.

A PEN America report documenting book bans in school libraries and classrooms between July 1, 2021 to March 31, 2022, shows that the spike in bans reflects a “disproportionate targeting of books by or about people whose identities and stories have traditionally been underrepresented in children’s and young adult literature, such as people of color, LGBTQ+ individuals, or persons with disabilities.”

Virginia Gov. Glenn Youngkin signed into law in April a bill that would give parents the authority to opt their children out of instructional content in classrooms that is deemed “sexually explicit.”

The Republican governor hailed the signing of Senate Bill 656 as delivering on “my Day One promises to give parents a greater say in their children’s education.”

But critics who opposed the legislation argued that what qualifies as “sexually explicit” is too vague and the law would make it easier for conservative advocates and organized groups to target and censor LGBTQ+ content.

“While SB 656 may not explicitly censor what books are taught, it puts teachers and librarians in the unenviable position of having to determine if a book qualifies under the policies,” the American Civil Liberties Union said in a statement on April 8. “This will most likely result in censorship due to teacher and librarian’s fear or confusion over what qualifies as ‘sexually explicit content."”

Anderson, a father of three, argued that the law gave “parents back their rights” by giving them more authority over the material their children are taught in the classroom. Now he hopes that his bill, which he plans to introduce in the coming weeks, would do the same when it comes to books available in public school libraries.

“This isn’t about gay, trans or straight literature,” he said, pushing back on the argument that the bill could lead to censorship. “This is about literature and books that have sexual content in it.”

Anderson’s proposed legislation is one of several initiatives in the state seeking to give parents more control over the material their children have access to in schools.

As children returned to the classroom this fall, Bedford County school libraries in Virginia launched a new notification system that enables parents to receive alerts about the books their children check out of the library.

“In response to some concerns brought up by a community member about the content in the libraries and curriculum, we’ve really had a year-long conversation about how we can be more transparent and inform parents,” said Shawn Trosper, director of curriculum and instruction for the school system, according to ABC affiliate in Lynchburg, WSET-TV.

Levin-Sheldon, who leads the Virginia chapter of No Left Turn in Education, told ABC News that she supports the alert system and hopes it would be implemented in additional counties across the state.

“At the end of the day, we just want the parents to have a choice in what their children are exposed to,” she said. “Because that choice is ours…that right is ours.”