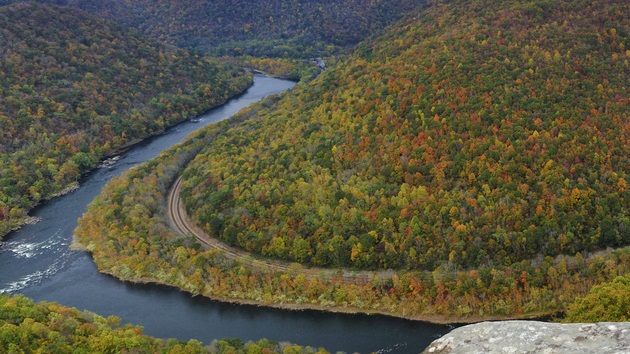 FAYETTEVILLE, W.Va. – With lockdowns closing businesses and athletic seasons getting canceled, Americans took to the outdoors in 2020. People walked, ran, and picked up sports like golf and tennis. Many also took trips to many of the nation’s public lands.

A recent report from the Outdoor Foundation found more than eight million Americans went hiking in 2020 compared to 2019. Americans have continued that trend in 2021, with attendance to National Parks reaching record numbers.

The New River Gorge in West Virginia was named the country’s 63rd National Park as part of the December COVID-19 relief bill, and although always well-known regionally, it has quickly turned into a popular outdoor destination.

“We have seen an uptick this year since the designation,” park superintendent Lizzie Watts tells ABC News. “We hope that uptick is tied to two things: that COVID gave a lot of people the opportunity to learn how safe being outdoors are, and [also] encouraged families to take hikes and go outside where we can actually do things.”

One of the oldest rivers in the entire world, fifty three miles of the New River flows through the park, surrounded by over 70,000 acres worth of scaling rock and lush green trees. The park is a haven for mountain bikers, hikers, rock climbers, and white water rafters. Visitors can also harness in and walk across a beam along the New River Gorge Bridge—one of West Virginia’s most-recognized landmarks.

With a stream of visitors coming in, Watts recommends people plan ahead of their trips:

“Know what the popular trails are, and then also have an alternative… Try to do it Monday through Friday if you can, early morning, later in the evening when there will be less people because part of your experience is you want that grandeur of enjoying it to yourself or with your party.”

Local businesses are expressing their excitement about the park’s new designation.

“This is a huge light that can be shone on how awesome it is to live here,” says Adam Stevens, the owner of the Arrowhead Bike Farm and Campground in Fayetteville.

Stevens tells ABC News his business saw a spike during COVID-19 pandemic, and anticipates another as a result of the National Park designation:

“Not only are we this amazing, iconic geological preservation… we’re also wildly popular activity point for outdoor people. So, that was what we had before all this happened. Then, through COVID we saw a spike. Now we have this National Park thing which brings a different type of visitor.”

At the Fayetteville equipment shop Water Stone Outdoors, co-owner Maura Kistler says they too noticed an increase in visitation:

“Foot traffic has been off the hook. We sit and look across the shop at each other all the time and I’m like, ‘What the hell is going on?’ And that is a great problem to have.”

She tells ABC News that businesses have been waiting for this moment and feel ready, but there is some concern about how the park’s infrastructure will hold up:

“The New River Gorge is National Park-standard ready… we just need a few more parking lots and need to get better about distributing visitors across our park. We need to use all the different trails and all the different overlooks. It’s been really easy to just send people to the standard spots and that’s doing visitors a disservice. We just need to get smarter about that and that’s what we’re working on now.”

There is another concern for one group in the region: public land access. It was a hotly debated topic as the state considered whether the area should be designated a National Park.

“A lot of us hunters… we feel the land was taken from us. That’s my stance on it, and I believe of a lot of other local people,” says Larry Case, writer for the blog Guns & Cornbread. He spent decades as a conservation officer and hunter in the New River Gorge.

Hunting is steeped in tradition in West Virginia, and was even one of the many outdoor activities that saw a pandemic boost.

“Hunters need to be concerned about public land access… and we didn’t need to change the area to a National Park for the protection of the area… We’re not against tourism, not against National Parks. I just personally don’t see why they had to take this area away from hunters.”

There is a genuine understanding between competing groups. Maura Kistler told ABC what hunters experience with the National Park designation does amount to a loss:

“I know Larry Case. He’s a good man. The hunters have been expressing their concerns and dissatisfaction. They lost some hunting… these are hunting grounds that have been used for generations and that is never an easy thing to accept.”

Park superintendent Lizzie Watts acknowledged the role hunters play in conservation efforts and in curbing a growing deer population in the region.

“A lot of hunters are some of the best conservationists in the world… and we have a huge population of deer in particular… I truly think the best decisions are compromises… both of the parties feel very passionate about what they believe. I think we truly all respected his [Larry Case’s] side of the equation… the compromise that the senators came up with was a Park and Preserve where we get to do both.”

She says there was an effort to compromise and, ultimately, to try to do what is best for the park:

“I think the American public and the national visitors are the true winners because we have a place at this stage, and more people will know how unique this wonderful ecosystem is.”

Listen to the report on the New River Gorge National Park and Preserve here.