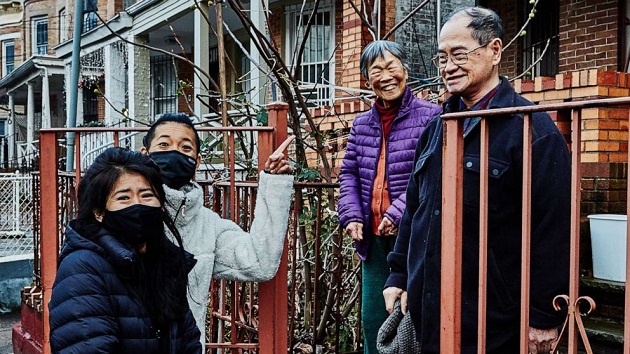 (NEW YORK) — This report is a part of “America Strong,” an ABC News series highlighting stories of strength and resiliency across the nation.

Before there was a single confirmed coronavirus case in New York City, a stranger yelled at Yin Chang and Moonlynn Tsai — who were both born and raised in the U.S. — to “go back to China.”

The couple watched as an outbreak of racism sowed new fear and economic anguish throughout their beloved neighborhood in the city’s Chinatown enclave, fueled by biases linked to the first reports of a novel respiratory disease suspected to have originated in Wuhan, China.

“We were more aware that our Asian American community was hurting truly from our own experiences first,” Chang, an actress and podcaster, told ABC News, saying they watched people “avoiding us, literally, like we are a walking virus.”

“We already started noticing shuttering of restaurants back in mid-January, and this was before anything was declared a pandemic,” Tsai, who works in the hospitality industry, added of the xenophobia’s financial impact. “Restaurants in Chinatown, they were closing so quickly, and these are multi-generational families that aren’t able to bounce back.”

Unemployment levels, believed to be linked in part to racial biases, skyrocketed among Asian Americans — increasing more than 10,000% in New York during a single week in April 2020 compared to the same period the year prior.

Despite the “model minority” myth, data from 2017 indicates Asians had the highest poverty rates in the city of all racial and ethnic groups. A spate of anti-Asian attacks, some targeting the elderly, also led to new unease. An August Census survey found Asian households were twice as likely as white households to report not having enough to eat as the pandemic raged because they were “afraid to go or didn’t want to go out to buy food.”

As feelings of abandonment gripped Chinatown, Chang and Tsai decided to make it their mission to ensure the elders in their community never went hungry — and know they weren’t being forgotten by the next generation of Asian America. The couple’s “Heart of Dinner” initiative to combat food insecurity and loneliness among Asian American seniors, longstanding issues exacerbated by the pandemic, began with just the two of them pulling all-nighters in their Manhattan home kitchen.

“In our culture, we’ve been ingrained to not show emotions or to ask for help,” Tsai said. “Visiting my grandparents, it was never big hugs, or ‘I love you’s,’ instead, it was always through food, and that’s why food is such a big, common factor in showing care.”

In our culture, we’ve been ingrained to not show emotions or to ask for help … That’s why food is such a big, common factor in showing care.
These cultural ideals of “self-sacrifice, rather than leaning on those around you to ask for help” led to the need being much more dire than they initially thought, Chang added. When they first set out and asked a local social services organization how many meals they should prepare, Chang said they were told: “As many as you can.”

Tsai used her culinary background to prepare hundreds of warm meals, and Chang ensured each was accompanied with a handwritten note thanking the elders for the sacrifices they made to pave the way for a diaspora of Asian immigrants to find community and acceptance in America.

“The notes go an extra step, because in our generations above us it is very common to not express our love out loud, but being born American and being American kids, we’re always being told by our elderly generation, ‘Oh, you American kids are always so loud and so expressive,"” Chang said. “But we understand that’s a privilege in itself, so we thought we would take that opportunity to just write, ‘We love you, we are thinking of you,’ something we know that often they’re not really used to hearing.”

“The idea of making them feel like there are so many more people that were involved was our hope to counter all of the horrendous, terrifying news that our elderly were likely hearing,” Chang added, noting that videos of racist attacks targeting people that looked like them were sending shockwaves of fear in the community through social media, despite relatively little coverage from national news outlets at the time.

Yet amid the suffering wrought by the once-in-a-lifetime pandemic, Chang said they also saw the “best of humanity” emerge as Americans came together to look out for each other.

While it began as just the two of them, Heart of Dinner has since grown to include a network of over 3,500 volunteers that serve more than 500 elders weekly — and has poured upwards of $200,000 in donations directly into local hard-hit businesses to buy the supplies. Moreover, thousands of letters in a multitude of Asian languages poured in from across the country to accompany the meals after the women put out a call for them online.

“We were blown away,” Tsai said of the support. “It’s been such a huge collective effort of community, whether Asian or not, but it’s been so incredible seeing so many people stand up and band together.”

While the initial goal was to take care of their elders, Chang and Tsai say they also saw the younger generation of Asian Americans gain new pride in their roots and identity.

Many of the cards, including the original ones written by Chang, were from American children learning to write their families’ native language for the first time via help from their parents or even Google Translate. “And then after a while, we started seeing a shift, where we will get letters: ‘I am not Asian, however, I love your culture, and I want to be a part of this mission,"” Tsai said.

“I grew up in a very predominantly caucasian neighborhood, and I had all of like, maybe, two Asian friends in total,” Tsai added of her childhood in California. “Getting to know other people who share similar stories growing up, especially through such a dark time, it was a really big thing that got us — through this pandemic.”

With dozens of languages and cultural ties to so many different nations, many Asian American immigrants coming to the U.S. in search of a better life for their families in the past often faced and developed a “survivalist mentality,” Chang noted, saying through Heart of Dinner they have seen “what can be done when an entire community does come together.”

“It wasn’t ’til Heart of Dinner that I experienced a sense of this deep connection and bond over a particular mission, specifically with the Asian American community,” Chang said. “It’s been beautiful seeing Asian Americans, AAPI of all different backgrounds, heritage, lineages, coming together.”

Heart of Dinner has so far provided nearly 90,000 meals to seniors in Chinatown and beyond, bringing hope and healing to a community that felt their suffering went unseen.

“It’s been a very, very difficult time for everybody, especially the Asian community,” Tsai said. “However, through this, Heart of Dinner has really brought out the best of people, and to see so many people coming together to take care of our elderly — and for our elderly to see so many people caring about them and letting them know that they matter — it’s that silver lining throughout this dark time.”

The Bud Billiken Parade through the years