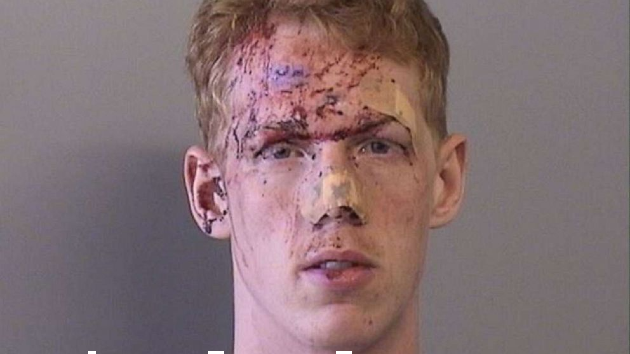 (TULSA, Okla.) — A man has been arrested after stalking his former female colleague for over a month, shooting her husband and attempting to kidnap her from her own home.

The incident occurred on Friday, April 2, in Tulsa, Oklahoma, when the unnamed target of the kidnapping was leaving for work in the morning as her husband escorted her to her vehicle when they saw the suspect, Justin Arthur-Ray Davis, sitting in his truck nearby, according to a statement from the Tulsa Police Department (TPD).

“Davis has been stalking the victim for over a month after he resigned at their mutual work place,” TPD said. “She has made reports of Davis sitting outside her apartment and leaving candy and food on her door step.”

It was then that Davis got out of his truck with a shotgun and chased after the couple with it as they ran back into their apartment.

“Davis shot through the door hitting the husband in the hand,” authorities said. “Davis [then] went into the apartment and grabbed the victim dragging her down the stairs, assaulting her along the way.”

Police say that neighbors woke up to the sounds of the incident and witnessed Davis “choke and punch the victim,” leading them to immediately call 911.

“The husband then came back down stairs to save her and Davis [pointed] the shotgun at him saying he will kill him if she doesn’t get in the truck,” TPD said.

The suspect then reportedly fired two shots from the shotgun into the air.

Davis took off as authorities began to arrive on scene which led to a short police chase on I-44. But when the suspect attempted to take an off-ramp, he crashed his car as he lost control of it.

Davis was transported to a local area hospital for a laceration to his head and booked into the Tulsa County Jail. Officers recovered the shotgun and ammunition at the scene of the accident.

It is currently unclear what charges Davis will face for his involvement in this incident.