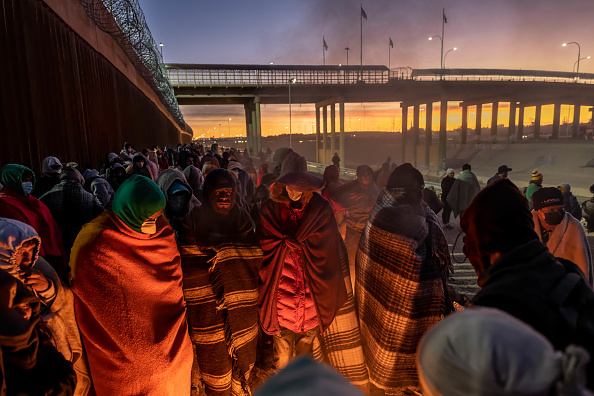 (EL PASO, Texas) — It’s just after 4 p.m. on a recent day in El Paso, Texas, and the downtown area near the bus stop is bustling with migrant families.

Usually this part of town — the intersection of Chihuahua Street and Overland Avenue — looks like a busy outdoor market, with food and clothes constantly being dropped off and bartered.

As the workday ends and the sun begins to set, a white truck pulls up with a trailer hitched to the back that has trash piled up. For a moment, it looks like the driver and passenger are planning to pick up the garbage that’s piled up on the streets. Instead, the driver yells out to the group, and some come rushing.

From the trailer, men and women pull out dozens of large cardboard boxes, the kind that most people would throw away or stick in a recycling bin. Unless they could serve another use.

“Es mi cama,” one young man yells — “It’s my bed,” he’s saying — as he runs to meet up with his family. They position the cardboard on the sidewalk with their belongings and make a bed with towels and blankets they’ve gathered throughout the day.

All of the migrants in the area that day had been picked up, processed and released by Border Patrol agents. Many had plans to sleep in a nearby shelter, church or hotel room paid for by the city. But not everyone was that lucky.

In recent weeks, the city of El Paso has become the epicenter of the latest surge of migrants arriving at the southern border. Though they may not have known it, thousands arrived ahead of what was expected to be the end of Title 42, a Trump-era public health policy used more than 2.4 million times since it was first implemented in 2020 to expel asylum-seekers from the country, ostensibly to prevent the spread of COVID-19.

The influx in El Paso has put pressure on immigration authorities, tasked with screening people entering the country, as well as on local government leaders and humanitarian groups tasked with ensuring public health and safety while supporting those in need.

Looming over the situation is the ultimate fate of Title 42 — criticized by migrants’ advocates as an illegal restriction on human rights even as some government officials believe it is a barrier preventing further unauthorized immigration.

U.S. District Court Judge Emmet Sullivan had ordered the policy to end on Dec. 21, ruling that Title 42 was “arbitrary and capricious” and “did not serve its stated purpose” of “banning infectious migration.” But a coalition of 19 mostly Republican-led states, including Texas, appealed and the case is now pending before the Supreme Court.

Hours before Title 42 was set to expire, Chief Justice John Roberts issued a temporary stay, keeping the policy in place for an unknown period of time while the justices weigh the merits of the appeal.

In El Paso, as the temperatures dip and bitter cold sweeps across West Texas, city leaders are grappling with how to quickly process and shelter those who are allowed in, rushing to set up shelters for migrants that have been processed and released.

“Look at the vast numbers increased in the past weeks, especially the last few days: Those numbers are unsustainable and that’s with Title 42 in place. So we can only imagine what will happen when it’s lifted,” El Paso Deputy City Manager Mario D’Agostino recently told ABC News.

Meanwhile, authorities who saw an average of 2,500 migrant crossings each day in the lead-up to the deadline are now encountering an average of 1,500 per day, according to the Department of Homeland Security. They credited that drop, in part, to their “work with partners in Mexico to discourage disorderly migration and disrupt criminal smuggling operations.”

Lee Gelernt, the lead attorney for the American Civil Liberties Union’s challenge to Title 42, said states appealing to keep the policy in place have a double standard when it comes to reducing the risk of COVID-19 spread.

“I think the real game here is that they’re trying to close the border,” he contended.

Ruben Garcia, director of the volunteer organization Annunciation House, works closely with the city and local Border Patrol contacts. Every morning, he said, he gets a text about how many migrants the Border Patrol is processing, how many will go into detention and how many they plan to release or need shelter.

After polling their shelter locations, he responds with how his group can help.

Asked by ABC News if he had the necessary capacity in his shelters, Garcia said, “No, and we haven’t for a while. We’ve been receiving on a daily basis the [maximum] capacity that is available at our hospitality sites.”

Garcia said that means “significant numbers of refugees [are] spending the night out on the street.”

In El Paso alone, more than 3,400 migrants have been expelled or formally deported in the past week, according to a DHS news release issued Tuesday.

In October, the Biden administration expanded expulsions under the Title 42 policy to include Venezuelans. At the same time, the administration created a narrow pathway for up to 24,000 Venezuelans to petition to stay in the country under asylum protections if they meet strict requirements like having family members who could financially support them while they continue their court proceedings and if they pass an extensive background check.

In El Paso, ABC News spoke with Dulieska Altamira, a 23-year-old Venezuelan migrant on her second day staying at Annunciation House. At three months pregnant, she traveled through seven different countries to get to the U.S. from Venezuela and plans to stay with family in Wisconsin, she said. Lack of food was only one of the issues that compelled her to take the dangerous journey.

“There’s a lot of violence and corruption in my country,” Altamira said. “There was no place to work. I had no other choice than to come here.”

Late Wednesday, with freezing temperatures on the horizon, the El Paso Office of Emergency Management (OEM) announced a collaboration with the city and the El Paso Independent School District (ISD) to open two vacant schools to serve as temporary sheltering facilities for migrants.

“We want to stress to the community that safety is of the utmost importance, and we will provide heightened security measures to care for migrants, staff, and the community,” said Emergency Management Coordinator Jorge Rodriguez.

“All eyes are on El Paso and for this reason, we must show the world the compassion our community is known for and illustrate the resilience and strength of our region,” El Paso City Manager Tony Gonzalez said. “El Paso ISD has been a phenomenal partner to help us stand up this shelter with amazing timeliness.”

The city recently declared a state of emergency, opening the door to more federal and state resources. Within days of the declaration, the Texas National Guard deployed a “contingency border force” of 400 personnel, including troops “trained in Civil Disturbance Operations and Mass Migration Response,” the Texas Military Department announced.

That force is used to “safeguard the border and repel and turn-back” some immigrants. Barbed wire fencing has since gone up on the northern banks of the Rio Grande to prevent people from crossing.

Still, large groups continue to come and city leaders worry upwards of 20,000 are waiting in Mexico to cross once Title 42 is lifted.

A young mother of two from Venezuela who would only give her first name, Anamaria, candidly told ABC News that she had no idea what Title 42 was. She said she chose to cross now because her handler said now was the best time.

She stayed in a hotel on her first night in Texas and was lucky to get her and her two boys into a church-run shelter for one more night before traveling to Dallas, she said.

After speaking with ABC News, Anamaria’s two sons came over to shake the reporter’s hand and, in broken English, slowly said, “Nice to meet you.”

The reporter returned the greeting in Spanish: “Mucho gusto.” Nice to meet you.

Looking proudly at her boys, Anamaria explained they learned those two phrases in the shelter during their stay overnight.