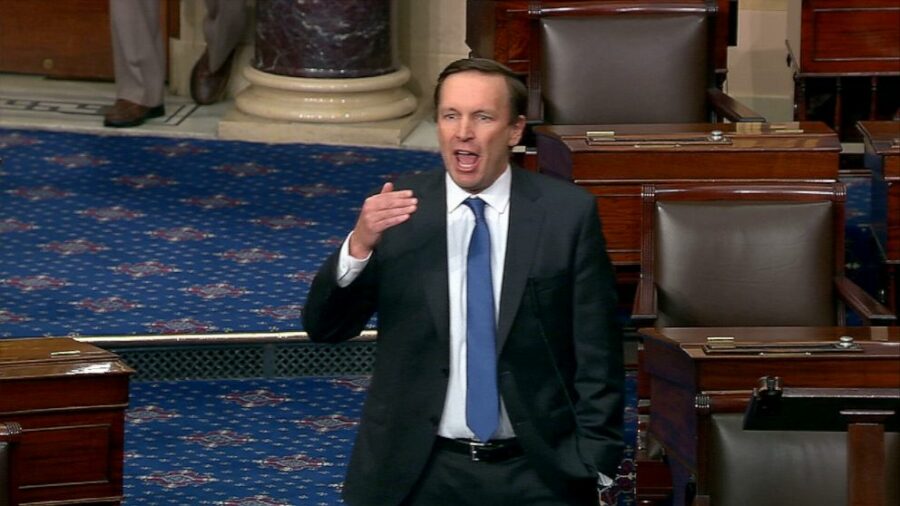 (WASHINGTON) — Every single mass shooting in America is not just a tragedy, Connecticut Democrat Chris Murphy said, it is a political — a moral — failing by the country’s leaders who must choose anew after each killing to do nothing about the violence.

That was Murphy’s impassioned argument on the Senate floor to his colleagues late Tuesday afternoon, hours after authorities said an 18-year-old gunman fatally shot at least 18 students and a teacher at an elementary school in Uvalde, Texas.

“What are we doing?” Murphy asked the chamber, repeating the question several times throughout his speech, for dramatic effect. “There have been more mass shootings than days in the year,” he said. “Our kids are living in fear every single time they set foot in the classroom because they think they’re going to be next. What are we doing?”

Little more than week had passed since a suspected white supremacist was accused of killing 10 shoppers at a supermarket in Buffalo, New York, Murphy said. “Just days after a shooter walked into a grocery store to gun down African-American patrons, we have another Sandy Hook on our hands.”

And so again he asked: “What are we doing?”

“Why do you spend all this time running for the United States Senate? Why do you go through all the hassle of getting this job, of putting yourself in a position of authority? If your answer is that as this slaughter increases as our kids run for their lives, we do nothing — what are we doing? Why are you here if not to solve a problem as existential as this?”

Murphy, the lead Democratic negotiator on so many stalled legislative solutions to gun violence, has become perhaps Congress most outspoken voice on the continued toll of shootings across the country; he was motivated to take up this cause by the killings of Sandy Hook elementary school children in his home state in 2012.

He has urged — and continued to urge — action on the issue even as it has become increasingly polarizing in Congress, where conservatives have little appetite to enact new bills.

In his speech on Tuesday, Murphy invoked the trauma for the surviving Sandy Hook children: “They had to adopt a practice in which there would be a safe word that the kids would say if they started to get thoughts in their brain about what they saw that day, [if] they started to get nightmares during the day, reliving stepping over their classmates’ bodies as they tried to flee the school.”

And so again he asked: “Why? Why are we here — if not to try to make sure that fewer schools and fear communities go through what Sandy Hook has gone through, what Uvalde is going through?”

There were legislative solutions, Murphy told his fellow senators. There had to be, he said.

“Our heart is breaking for these families,” he said. “Every ounce of love and thoughts and prayers we can send we are sending I’m here on this floor to beg to literally get down on my hands and knees and beg my colleagues find a path forward here. Work with us to find a way to pass laws that make this less likely.”

“I understand my Republican colleagues will not agree to everything that I may support,” he continued, “but there is a common denominator that we can find. There is a place where we can achieve agreement.”

The latest episode of mass gun violence has prompted a familiar timeline of events among politicians: With the president set to address the nation, various lawmakers have spoken out to share their grief and horror and suggest that there be come future bipartisan compromise to reduce gun violence.

Past efforts to enact such legislation, on various scales of reform, have all died in Congress.

In addition to Sen. Murphy, Texas’ congressional delegation began speaking out on Tuesday in the hours after the killings.

John Cornyn, a leading Republican in the Senate and a Houston native, has been at the center of discussions about gun violence that have failed — including background checks reform. He told reporters on Tuesday he was headed back to Texas after his own floor speech and was being briefed by officials, including the Uvalde mayor.

“We’re still trying to get a clearer picture of what’s going on what happened and what the motivation was But it’s clearly horrible,” Cornyn said.

Democrats Jessica Cisneros and Henry Cuellar, who are competing in a runoff election on Tuesday for a South Texas congressional seat, issued statements of their own.

“This is a devastating tragedy,” Cisneros wrote on Twitter. “How many more mass shootings do children have to experience before we say enough? Sending my condolences to the children and families in Uvalde who are experiencing this unthinkable tragedy.”

Cuellar said he was “heartbroken” and urged the public to come together to support the community.

“Inevitably when there’s a murderer of this kind, you see politicians try to politicize it, you see Democrats and a lot of folks in the media whose immediate solution is to try to restrict the constitutional rights of law abiding citizens,” he said.