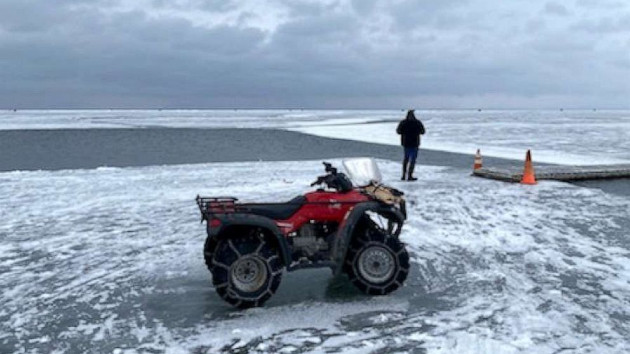 (NEW YORK) — About 100 people fishing on a frozen lake in Minnesota were rescued after a large chunk of the ice broke off, leaving them stranded.

Emergency dispatchers received a 911 call just after 11:30 a.m. Monday from people who were fishing on Upper Red Lake in northern Beltrami County, according to a news release from the Beltrami County Sheriff’s Office. The callers stated that a large chunk of ice broke free from the main shoreline, stranding about 100 individuals, authorities said.

Once first responders arrived, they estimated the fishermen had drifted up to 30 yards into open water following the breakage, according to the sheriff’s office.

Several water rescue agencies and vehicles were dispatched to the scene and assessed the extent of the open water with visual and drone operations. Authorities found a narrow spot of the separation to deploy a temporary bridge to evacuate the stranded fishermen.

On Facebook, the Beltrami County Sheriff’s Office advised those who needed to evacuate to head toward the access point at JR’s Corner.

A fisherman named Shane from North Woods Fish Houses in Beltrami County said in a video posted to Facebook that “a pretty big crack” opened up from east to west.

“We have some people on the other side of the water line,” he said. “We are going to get to you.”

The upper Midwest has had a very warm fall season, with temperatures near 70 degrees in early November after above-average temperatures in October and September.

Northern Minnesota had a cold snap before the Thanksgiving holiday, when many lakes produced ice cover. But after the holiday, temperatures reached close to 50 degrees, forecasts show, resulting in the thawing and melting of ice.

Gusty southeast winds on Monday likely loosened the ice up even more.

Much colder weather is on the way for the upper Midwest over the next few days and more ice will be forming.

Due to the urgent nature of getting people off the ice and the likelihood that several groups were unaware of the separation, the first responders sent out a wireless emergency alert, according to the sheriff’s office. Just after 2:30 p.m., officials announced that everyone — an estimated 100 people — had been evacuated from the ice.

Authorities warned those who plan on ice fishing to remain cautious and vigilant.

“The Beltrami County Sheriff’s Office reminds those who are thinking of heading on the ice that early season ice is very unpredictable,” authorities said. “Extreme caution should be used when heading on the ice and to check the thickness frequently to ensure an adequate amount of ice.”