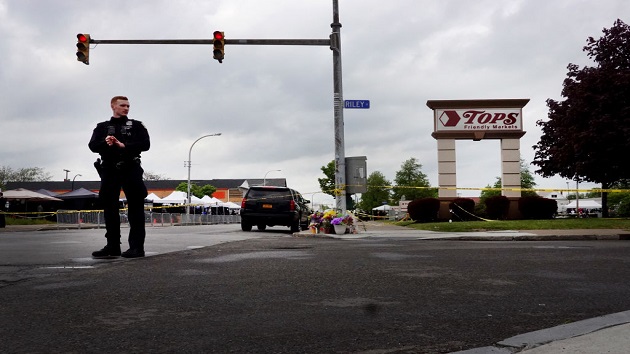 (NEW YORK) — An Erie County, New York, 911 dispatcher could be fired after an employee at the Tops supermarket said the dispatcher hung up on her during Saturday’s attack that killed 10 people.

Latisha Rogers, an assistant store manager, told The Buffalo News that the dispatcher “was yelling at me” during those terrifying moments when the shooter was firing in the store.

“You don’t have to whisper,” Rogers said the dispatcher told her as she tried to stay quiet so the gunman wouldn’t find her. “And I was telling her, ‘Ma’am he’s still in the store. He’s shooting,"” according to the paper’s account.

The county will seek the dispatcher’s termination following a review of the 911 call, a spokesman for the Erie County Executive’s Office told ABC News.

The spokesman, Peter Anderson, said dispatching officers to the scene was unaffected by the actions. Police have said officers arrived a minute after the shooting began.

Rogers told The New York Times she was behind the customer service counter when the shooting began. She ducked behind the counter to call 911 and told the paper she whispered, “There’s someone shooting in the store.”

Rogers said the dispatcher asked why she was whispering and told her she couldn’t hear her, according to the Times. The line then cut out.

Payton Gendron, 18, has been charged in the mass shooting, which authorities have said was racially motivated. All 10 people killed in the attack were Black.

Rogers, who is also Black, was uninjured in the shooting.