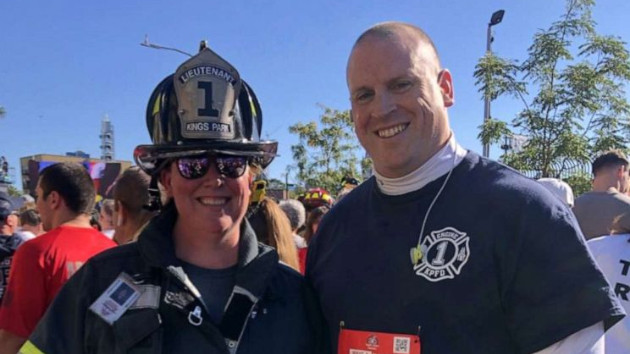 (NEW YORK) — Every year on the third Sunday of September, hundreds of runners gather in an IKEA parking lot in Brooklyn, New York right at the entrance to the Brooklyn Battery Park tunnel, ready to run 3.2 miles into Manhattan for the Tunnel to Towers 5K — commemorating 9/11.

The annual event honors fallen Brooklyn firefighter Stephen Siller who, while dressed in his full gear, ran through the Brooklyn Battery Park tunnel to Ground Zero on Sept. 11, 2001.

Siller, with Brooklyn Squad 1, learned the north tower of the World Trade Center complex had been hit by a plane just after he finished his shift. He turned around, grabbed his gear and drove his truck to the entrance of the Brooklyn Battery Tunnel.

It was closed but Siller was determined, so he walked the rest of the way to the towers. He worked to save others in the aftermath of the attacks but died at the scene.

On Sunday, volunteer firefighter Erica Johnston was one of the runners in her own first-responder gear — pants, jackets, suspenders and helmet — in tribute to Siller and the other victims.

Johnston, from Long Island, ran the Tunnel to Towers 5K for the sixth year, she told ABC News. She said she felt the remnants of 9/11 as she finished the race.

“It’s just in the air,” Johnston said. “You are standing literally in the footprint of what happened that day and you’re looking out … It just takes your breath away.”

Johnston, who was in the sixth grade when the Twin Towers fell, said, “If you run this race and especially if you live in New York, you’re from New York or the surrounding area, you’ve been affected by 9/11 in whatever way that is. It’s just impossible not to feel that same sense of tremendous emotion.”

When asked why he runs in his gear, Maine firefighter Jon Lee pointed to Siller’s example: “He did it to save strangers’ lives. He did that for others. He did that for us. And the least I can do to honor him is to run the same route in the same gear.”

Westchester fireman Carlo Valente said, “It’s a small sacrifice that we can do, the closest thing we can get to physically — not mentally, not emotionally.”

Valente’s colleague Claude Sanz said he gives credit and honor to Siller, “who did this knowing that his friends and buddies were on the other side in hell.” The race, to him, was a no-brainer: “we just do it.”

Brooklyn Squad 1 lost 12 other firefighters that day, as well as Siller. They are honored with a statue outside of their former fire station.

The 5K supports the Tunnel to Towers foundation, founded after 9/11, which helps American first responders by providing mortgage-free homes to families with young children who have had relatives die in military service or as first responders.

The foundation builds homes for injured veterans and first responders while committing to end veteran homelessness and aiding victims of major U.S. disasters.

New York City firefighter Jon Stanton told ABC News that the fundraising race “means everything. It’s about service, especially for us being firemen. This event represents everybody that has passed away over the 21 years.”

“So many people have forgotten what happened that day. It’s just a page in a history book that they just glance over. I don’t want to forget,” Valente said.

He runs in honor of a firefighter who belonged to his squad who died on 9/11.

“I never met him … But I know that feeling that it gets forgotten. And it’s not about us here now, but it’s about them, their memories, what they’ve gone through and what they meant to their families and friends,” Valente said.

As a young firefighter, Josh Coletta, from Ohio, said Sunday that he can feel the legacy of Sept. 11 in his own life.

“I wasn’t alive at the time of 9/11 and still it impacts us all in different ways,” he said.

Tunnel to Towers’ foundation was created by Siller’s older brother, Frank, in 2001. The first 5K was in 2002 and the race now happens annually on the last Sunday of September.

The group is supported by other races as well, like the Tower Climb, where participants climb up 104 flights of stairs in the Freedom Tower to the One World Observatory. Runners can also create teams for the New York City Marathon and Half Marathon to collect donations for the foundation.

The Tunnel to Towers foundation says it has raised more than $250 million to support veterans and first responders and provided more than 450 mortgage-free homes. During the COVID-19 pandemic, New York Congressman Lee Zeldin facilitated the foundation’s donation of 10,000 KN95 face masks to be distributed to Suffolk County frontline workers.

Running in 60 pounds of firefighter gear is a physical challenge. But Johnston, one the runners on Sunday, said she was reminded of “the gravity of the original situation — where Steven Siller ran through the tunnel without even thinking about it in his gear with an air pack, all kinds of stuff, and he just did what needed to be done.”

As a volunteer first responder since 2013, as both an EMT and a firefighter, Johnston said she has an acute sense of community.

That connection is one of the pillars of being a firefighter, members of various departments across the country agreed.

“Our fire department had a lot of volunteers come and go, and it’s something to continue to keep the fire department engaged with the traditions of the community, with what 9/11 means to a lot of people,” he said.

Johnston’s fellow firefighters connect her to the past and the present, she said.

“Being in the department that I’m in, many of the guys a couple years older than me, they were there that day [in 2001] or they know somebody who lost somebody,” she added. “Especially for me, sharing their experiences of that day all this time later is just a way to remember and keep the memory alive.”

Johnston felt this same sense of community from the crowds.

“There’s a million American flags, there’s FDNY firefighters, there’s military personnel holding silk screens of the 343 firefighters and Port Authority police and NYPD officers who were killed in 9/11,” she said.

Service members, police officers and firemen hold images of the fallen first responders as runners exit the tunnel each year. The memorial banners stretch across the final mile of the race.

“It’s absolutely electric, all the encouragement and community, whether you’re in your gear or not,” Johnston said.

Sanz agreed: “To think of how this city came together to help each other … What is heart-wrenching is to see people from other parts of the country come here to mourn with us, just to remember.”

That resiliency matters, he said.