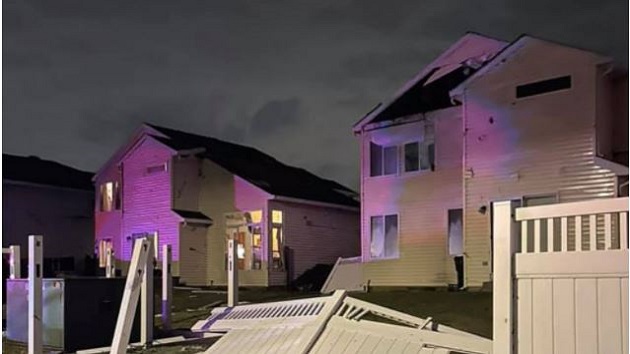 (NAPERVILLE, Ill.) — A tornado tore through the Chicago suburb of Naperville, Illinois, just after 11 p.m. Sunday, leaving five people in the hospital, including one in critical condition, city officials said.

“It was like a bomb went off with all the debris in the streets,” Ryan Puraleski told ABC News.

The twister also downed power lines, leaving about 450 customers without power. The city said restoration is expected by midnight.

Tornado damage in East Brewton. We are all fine, but the trailer park is in bad shape. @rzweather @spann pic.twitter.com/6hm00s9gUZ

At least three storm-related deaths were reported in Alabama this weekend.

In Tuscaloosa, a 24-year-old man and his 3-year-old son were killed when a tree fell on top of their house, according to Capt. Marty Sellers of the Tuscaloosa Police Department.

Claudette is expected to move out to sea Monday morning. But the same storm system that brought the severe weather to the Midwest will stall in the South this week and bring heavy rainfall and possibly flash flooding.