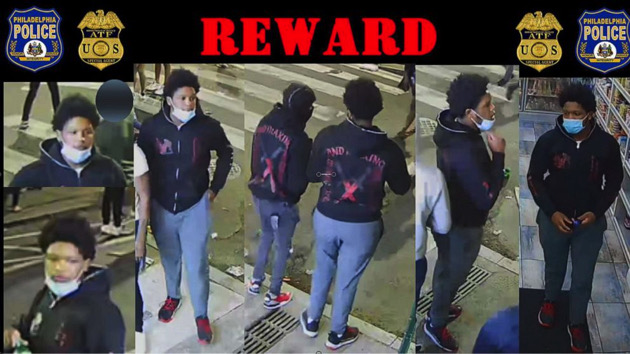 (PHILADELPHIA) — A $30,000 reward is being offered in the search for a third suspect in a Philadelphia mass shooting that erupted Saturday night in the busy South Street entertainment district that left three people dead and 12 injured, authorities said.

The Philadelphia Police Department released a series of security video clips and still images showing the teenage suspect from multiple angles on South Street around the time of the shooting.

“This male is considered armed and dangerous,” police said in a statement.

The episode was one of at least 11 mass shootings across the country over the weekend, including one that left three people dead and 11 injured in Chattanooga, Tennessee, another in which three people were killed at a graduation party in Socorro, Texas, and yet another that left a 14-year-old girl dead and eight people injured at a strip mall in Phoenix.

In total, 17 people were killed and 62 were injured in the mass shootings.

As the search for the third suspect in the Philadelphia shooting continued Wednesday, the House Oversight Committee was holding a hearing on gun violence in which survivors and relatives of those killed in recent mass shootings at a Uvalde, Texas, elementary school and a Buffalo, New York, supermarket testified.

The Philadelphia mass shooting occurred just before midnight Saturday when a physical confrontation on the street prompted multiple people to open fire near the intersection of South and Second streets, which was teeming with people at the time.

Two of the three people killed and many of those injured were innocent bystanders, police said. Police initially said 11 people were injured, but that number was revised to 12 in the police department’s latest statement.

Police said four or five different guns were used in the shooting and two, including an untraceable ghost gun — a firearm without serial numbers — .with an extended magazine, were found within a two-block crime scene.

Investigators said arrest warrants for additional suspects could be issued as the investigation unfolds.

Police said the wanted suspect still at large is Black, in his late teens, tall and heavyset, light- to medium-complected and with bushy hair. He was wearing a COVID-style mask and a black hooded shirt with distinctive markings, police said. Video released by police showed the suspect wearing dark sneakers with brightly colored shoe laces as he went into stores and mingled with people on the street.

Two other suspects have been arrested and charged in the shooting. Arrest warrants were issued Monday for Quran Garner, 18, and Rashaan Vereen, 34.

Vereen was arrested by U.S. Marshals Monday afternoon at a home in South Philadelphia. He is charged with attempted murder, aggravated assault, simple assault, recklessly endangering another person, conspiracy, violating the uniform firearms act, possession of an instrument of crime, tampering with evidence and obstruction of justice.

Citing security video, Philadelphia Assistant District Attorney Joanne Pescatore said the shooting started after one of the victims she identified as Mika Townes got into a physical confrontation with Gregory Jackson, a 34-year-old man who was killed in the shooting.

Pescatore said Townes and Jackson were passing each other on the same side of South Street when words were exchanged, setting off a melee. She said Jackson is captured on video punching Townes in the face and then Vereen, who was with Jackson at the time, allegedly helping Jackson beat Townes.

Jackson and Townes, who both had valid permits to carry concealed weapons, both drew weapons during the confrontation, Pescatore said. She said Townes, who police have deemed a victim in the incident and is not facing charges, fatally shot Jackson in self-defense before he was was allegedly shot and seriously injured by Vereen.

She said Garner, who was with Townes at the time, then allegedly drew a weapon and fired in the direction of where the melee occurred as police converged on the scene. Garner, who Pescatore alleged was armed with the ghost gun police recovered at the scene, then allegedly aimed his weapon at officers, who fired at him, striking him in the hand.

Innocent bystanders Kris Minners, a resident adviser at Girard College prep school in Philadelphia, and Alexis Quinn, were killed in the shooting.

Minners was out celebrating his 22nd birthday when he was shot.

“The loss of Kris reminds us that gun violence can and will touch everyone in our nation as long as our elected officials allow it to continue,” the Girard College teachers’ union said in a statement read.

Quinn was described by her mother, Tina Quinn, as a loving daughter whose favorite color was purple and someone who learned every new TikTok dance.

The mother described her 24-year-old daughter as her “mini-me.” She said her daughter called her “old lady.”

She added, “I just want closure for my daughter you know? I just want this gun violence to end.”