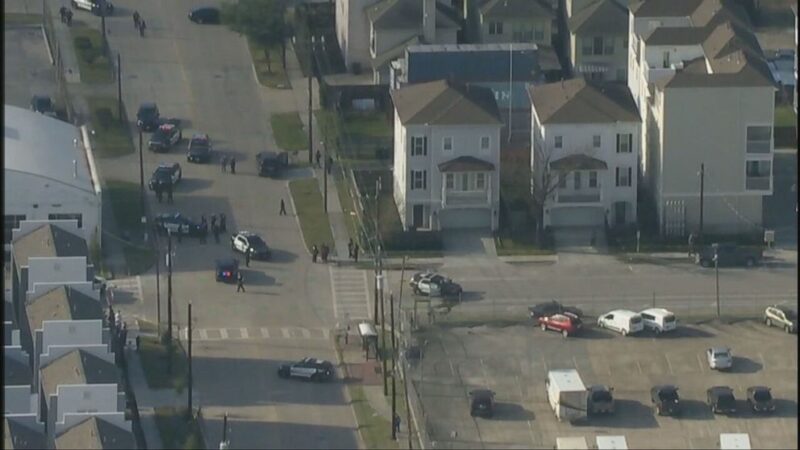 (HOUSTON) — Three Houston police officers were shot Thursday afternoon by a suspect who fled, carjacked a white Mercedes and is currently holed up in a home in a standoff with authorities.

Houston police said that the officers are all in stable condition with non-life-threatening injuries. They are being treated at Memorial Hermann Hospital.

The incident took place around 2:40 p.m. local time when officers responded to a domestic call, Houston Police Chief Troy Finner told reporters at an evening news conference outside the hospital. The suspect spotted the officers and fled the scene in a car, with officers giving chase, Finner said.

The suspect crashed into a parking lot gate and then opened fire at the officers with an automatic weapon, according to Finner. The officers returned fire but the suspect escaped, carjacked the Mercedes and continued his flight, the chief said.

The suspect entered a house in the Fifth Ward and fired on officers who were outside, Finner said. No officer was hurt in this shootout, according to police.

“He is still in the home and we’re treating it as barricaded suspect,” Finner said at 6 p.m. local time.

It was unknown if the suspect was wounded in either shootout, Finner added.

Houston Mayor Sylvester Turner said he visited each of the officers in the hospital.

“All three officers are in good spirits, all were talkative and we expressed our support of them,” he said.

This is the second incident this week in which a law enforcement officer was shot in Houston. Cpl. Charles Galloway of Harris County Constable Precinct 5 was shot and killed on Sunday when the deputy pulled over a car in southwest Houston.

Oscar Rosales, 51, who was arrested on Wednesday after fleeing to Mexico, has been charged with capital murder in that shooting.