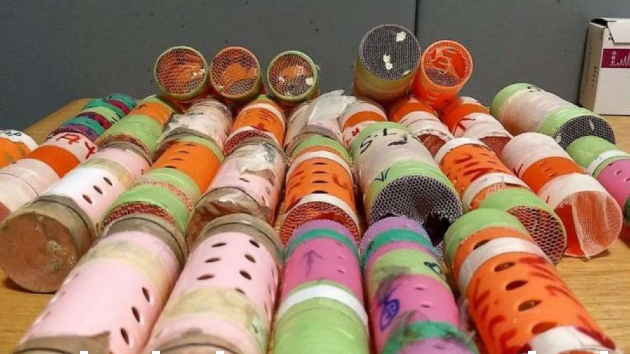 (NEW YORK) — A man has been sent back to Guyana after U.S. Customs and Border Protection (CBP) discovered that he had tried to import 29 finches that had been sealed inside hair rollers in his luggage.

The incident occurred on Sunday, March 28, when a 26-year-old unnamed Guyanese man arrived at John F. Kennedy International Airport in New York City on a flight from Georgetown, Guyana, and was pulled aside for a secondary baggage examination, according to the CBP.

It was then that officers discovered 29 live finches that had been packaged up and sealed into hair rollers inside the man’s suitcase.

The man was reportedly en route to an address in New Jersey when he was caught with the birds.

“Customs and Border Protection officers and agriculture specialists face a very complex and challenging task and that is to protect our nation, our citizens, our agricultural resources and our economic security, and they meet that challenge with extraordinary commitment and vigilance,” said Marty C. Raybon, acting director of Field Operations for CBP’s New York Field Office.

According to the CBP, the 26-year-old man was not criminally charged but was given a $300 civil penalty before being allowed to withdraw his request for admission into the United States and placed back on a flight headed back to Guyana the following day.

The birds were subsequently quarantined by CBP agricultural specialists before being turned over to the United States Department of Agriculture Veterinary Services. It is unclear what will happen with them next.

There are lawful ways to import birds for commercial purposes into the United States but, according to the CBP, improperly imported birds pose a huge potential threat for possible bird flu outbreaks — formally known as Highly Pathogenic Avian Influenza (HPAI) — and can devastate the U.S poultry industry.

In fact, it has happened before.

“The U.S. poultry industry suffered severe impacts during a 2015 HPAI outbreak,” the CBP said in a statement. “According to the USDA Economic Research Service, more than 50 million commercial turkeys and laying hens in the U.S. died or were culled to stop the spread of the disease. The losses were estimated at more than $1 billion, and the economic impact much greater as more than 50 poultry trading partners imposed partial to full bans on U.S. poultry imports. The U.S. poultry industry has since recovered.”

The CBP said that during a typical day last year, their agricultural specialists across the United States would discover and seize 3,091 prohibited plant, meat, animal byproducts and soil, and would intercept 250 insect pests at U.S. ports of entry.