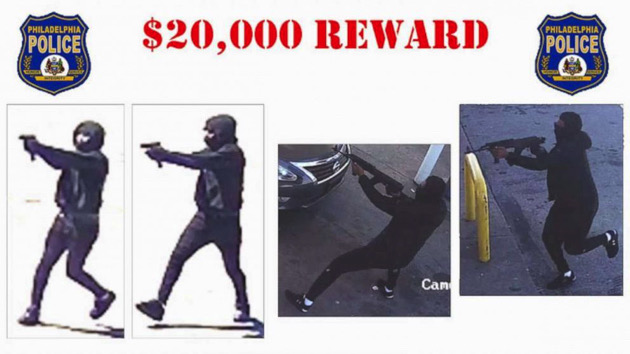 (PHILADELPHIA) — A $20,000 reward is being offered in the search for a pair of gunmen caught on security video apparently stalking and then opening fire in broad daylight at a busy Philadelphia gas station, killing a 30-year-old man.

The Philadelphia Police Police Department released surveillance video Wednesday of the brazen ambush shooting in the Mt. Airy section of the city.

The footage captured the two gunmen pulling into the Liberty gas station in a 2009 red Mazda 3 sedan at around 2:30 p.m. Monday and opening fire on the victim as he was pumping gas into his vehicle.

The video shows the suspects’ car with the New Jersey license plate V62-PWX first stopping near the crowded gas pumps and backing up after apparently spotting the victim. The footage showed the car, driven by a third person, parking nearby and the gunmen, both dressed all in black, springing from the rear seat, rushing up to the victim commando-style and unleashed a barrage of gunfire.

Police said one of the gunmen appeared to be armed with an AK-47 rifle and the other looked to be firing a handgun with an extended magazine clip.

“The offenders fired multiple shots at the victim, striking him throughout the body,” police said in a statement.

The victim, identified by police as Brandon Dixon of Philadelphia, was taken to Einstein Medical Center, where he was pronounced dead, authorities said.

Police described the shooting as a “brazen act of viciousness” that put multiple innocent bystanders in jeopardy as the gunmen fired wildly at Dixon, who tried to run as he was being shot. The video showed the gunman running back to the four-door Mazda and driving away.

Dixon’s mother, Lisa Dixon, went to the gas station on Wednesday, saying she was “searching for answers.”

“I’m just hurt,” Lisa Dixon told ABC station WPVI in Philadelphia. “I came back here because I just need to be where he was last alive.”