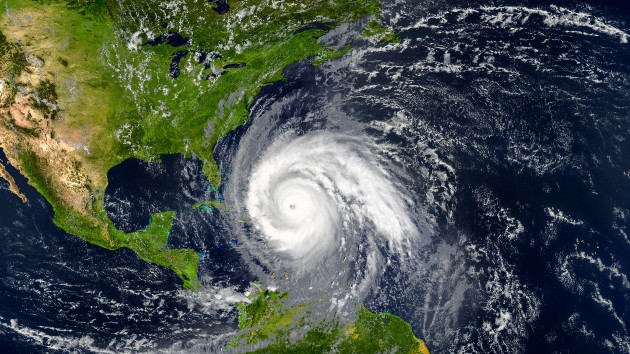 (NEW YORK) — The National Oceanic and Atmospheric Administration is set to release this year’s hurricane outlook after a record-breaking 2020 season.

The 2020 Atlantic hurricane season — June to November — had 30 named storms, the most in recorded history, two more than in 2005, which included Hurricane Katrina.

Twelve named storms made landfall in the continental U.S. last year, three more than the previous high in 1916.

Six of those were designated as hurricanes — double what’s normal — as 2020 tied 1886 and 1985 for most hurricane landfalls in a single season. Louisiana was hit particularly hard, with five named storms making landfall, the most ever for one state.

The effects of climate change already may be evident in the behavior of recent hurricane seasons, experts said.

In Miami, floods that result from merely a full moon and high tide already are taking place, Klotzbach said. Although the rise is 3 to 6 feet, which may not seem like much, that amount is enough to weaken house foundations and move or wash structures away when storm surge precedes a hurricane, he added.

Warmer atmospheres also are contributing to more moisture contained within storm systems. That could cause deadly flash floods from tropical cyclones for inland areas, similar to the devastating flooding that Hurricane Harvey caused in Houston in 2017 and Hurricane Florence caused in the Carolinas in 2018, Klotzbach said.

Over the last three years, hurricanes also have tended to intensify more rapidly, which could be due to the warmer water available, which is the system’s source of energy, Klotzbach said. That could mean more Category 4 and 5 hurricanes are on the horizon.

The connection between an increased number of hurricanes in recent years and climate change is a bit more complicated than some might think, Klotzbach added. Warmer ocean water does help with formation of tropical cyclones, but at the same time increased temperatures in the upper atmosphere would not be favorable for tropical cyclones to develop.