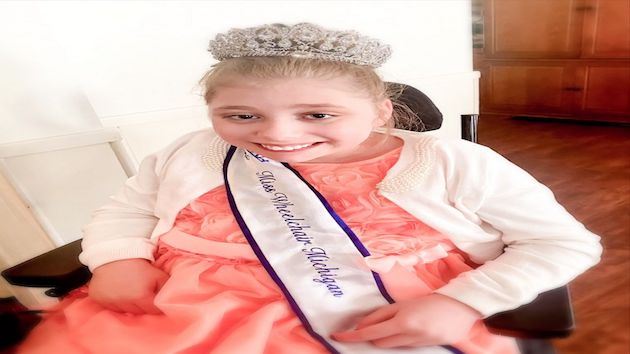 (ITHACA, Mich.) — A 12-year-old girl from Michigan is fighting for new legislation to make public restrooms more accessible to people with disabilities.

“Good Morning America” first shared Zoey Harrison’s story in 2018 when she helped “save recess” after her mom invented the Bodycoat — a special coat for children who use wheelchairs.

Now, Zoey, who uses a power wheelchair herself, has been meeting with state and federal officials to get two bills passed.

“I’m excited to make a change,” Zoey told “GMA.” “I’m happy people are listening to me.”

Zoey said bathroom floors are not particularly clean and in order for her to change her clothes, her parents have to lay towels on the ground.

The first bill Zoey introduced to State Representative Graham Filler in 2019 focused on increasing accessibility in public restrooms, WZZM reported. The second suggested adding locations to accessible restrooms to the Michigan’s government website so people with disabilities know where the most suitable ones are and plan trips with their families.

Mom Jennifer Harrison of Ithaca, Michigan, told “GMA” that she adopted Zoey when she was a 1-year-old. Zoey has cerebral palsy.

“I’m so amazed by her,” Harrison said. “It doesn’t stop her from reaching her goals to help a whole bunch of people and she’s not shy or afraid to speak up.”

“It went really good,” Zoey said. “He said, ‘Those are great ideas. He said, ‘I never knew that was a problem."”

Zoey would also like to see more family restrooms and create maps so people know the locations.

She hopes to visit amusement parks, restaurants, stores and examine the facilities. If they meet Zoey’s approval as well as that of the checklist’s under her proposed bills, those places would receive an official “Z-seal of approval.”

Zoey plans to be a 911 operator when she grows up.

Her message to fellow kids: “Always be kind and helpful and no matter what, you can make a difference.”