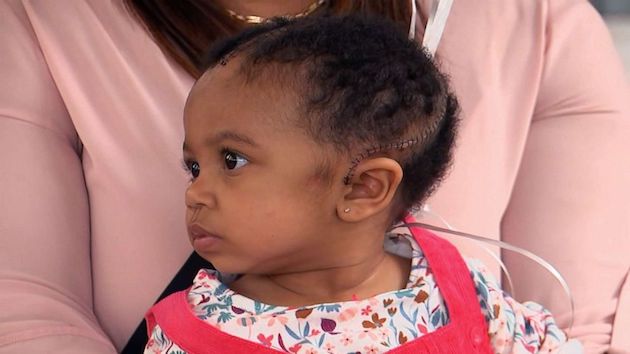 (NEW YORK) — A 1-year-girl was released from a New York hospital Friday nearly four months after she was shot in the face.

Catherine, whose mother described her as “our beautiful miracle baby,” was initially hospitalized in critical condition at NewYork-Presbyterian Komansky Children’s Hospital following the Jan. 19 shooting in the Bronx.

“Our journey has been long, but finally, this is the light at the end of the tunnel,” her mother, Miraida Gomez, told reporters while holding Catherine outside the hospital.

“We’re definitely happy, we’re eager to start this new chapter in our life, and just happy that everyone is able to witness a miracle,” she said.

Catherine was struck by a stray bullet days before her first birthday while in a parked car with her mother outside a grocery store, waiting for her father who was inside the store, police said.

A man chasing another man fired two shots, hitting the baby in the face, police said.

Recalling that day, Gomez said she was “numb.”

“I don’t think I could describe my emotions all at once,” she said.

“It should be unimaginable that this would happen in our city. But it did,” he said on social media at the time.

“Leaders at every level have abandoned city streets. I won’t,” he said.

Gomez said they weren’t sure what the outcome would be following the shooting.

“It was really gloomy. It felt like there was a dark cloud over us because everything was unknown,” she said.

Due to her injuries, the toddler had developed hemiparesis, a paralysis of her right side that affected her ability to eat, walk or use her right arm, the hospital said.

Today, she is a “super bubbly” toddler who loves to climb and is able to walk, “which is something they told us might not happen,” Gomez said.

“She’s beat all odds against her, gratefully,” Gomez said. “I want to say that her journey has also been miraculous compared to what we were always told, and we’re just happy to share this with everyone.”

Authorities are still looking for the shooter, who police said fled the scene in a gray four-door sedan.

Bronx District Attorney Darcel Clark vowed that the city would not stop looking until the gunman was caught.