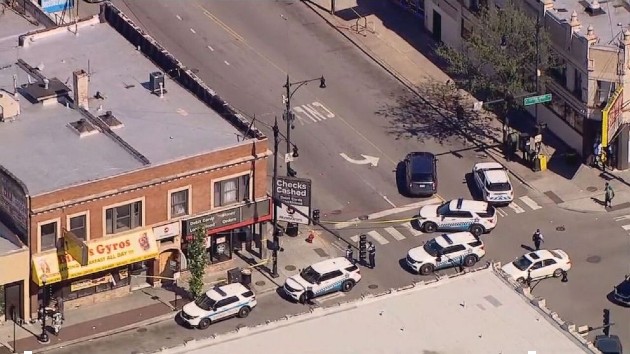 (CHICAGO) — A 1-month-old girl and a 9-year-old girl were both shot in the head in separate acts of violence in Chicago on Thursday, according to police.

Seven people, including the 1-month-old baby, were shot shortly after 8 p.m. Thursday when three men got out of a black Cherokee Jeep and began spraying bullets on the city’s South Side, Chicago police said.

The baby was hit in the head and hospitalized in critical condition, police said.

The other six people shot were listed in good condition, police said.

The gunmen fled the scene and no arrests have been made, police said.

Hours earlier, at about 2:45 p.m., a 9-year-old girl was shot in the head while in a car on the city’s South Side, police said.

The 9-year-old was hospitalized in critical condition, police said.

A man in the car was also shot and hospitalized in good condition, police said.

The suspects, who may have been in a white SUV, fled the scene, and no arrests have been made, police said.

Chicago has had 1,489 shootings incidents this year, as of June 27 — a 12% increase from 1,333 shootings over the same time period last year, according to police department data.

These latest shootings come as the Chicago Police Department says it has a summer focus on removing illegal guns from the streets.

Police have seized 5,901 guns, including 290 assault weapons, so far this year — a 26% increase from the number of guns seized by the same time last year, David Brown, superintendent of the Chicago Police Department, said at a news conference Thursday.

The city is on pace to recover over 12,000 illegal guns by the end of the year, he said.

“There’s a lot of work to be done,” Brown said. “When crime happens, which is likely late evening into the early morning … is when our schedules are being adjusted. Because we are sworn to protect the people of Chicago. But we have also acknowledged 12-hour shifts and canceled days off are impacting our officers. … and we have implemented an officer wellness plan as a part of this.”