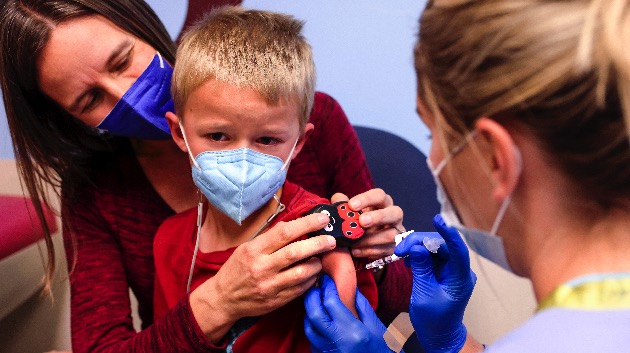 (NEW YORK) — With millions of Americans set to travel and gather for Christmas and the New Year, families across the country are scrambling to try to ensure they are adequately protected against the coronavirus.

Experts suggest a confluence of factors is likely driving the country’s case rate up amid the surge of the omicron variant, most notably the millions of Americans who remain unvaccinated.

Many of those who have yet to get the shot are children, despite the fact that in the U.S. anyone over the age of 5 is eligible for the vaccine. Pfizer shots were authorized by the Food and Drug Administration for those 5 to 11 at the end of October, 12 to 15 in May and are fully approved for those 16 and older.

Since the emergence of the delta variant, children have been a significant driving factor behind the nation’s latest coronavirus surges, accounting for about a quarter of the nation’s reported weekly COVID-19 cases. Since July, more than 3.3 million have tested positive for the virus, representing 1 in every 4 cases, according to data from the American Academy of Pediatrics and the Children’s Hospital Association. In addition, the U.S. has not seen a week with fewer than 100,000 new pediatric cases since early August.

Now, given the potential for the highly transmissible omicron variant to cause an even greater wave of infections, experts say it is more critical than ever for children to be vaccinated in order to protect them and those around them, from severe disease and hospitalization, despite the fact that severe illness remains generally uncommon among children.

Earlier this week, the Centers for Disease Control and Prevention reported that models, which estimate the epidemic trajectory of coronavirus in the U.S., suggest that the new COVID-19 infections are likely to surge in the weeks to come and could exceed previous peaks, due to omicron.

“One of the fundamental drivers of ongoing community transmission is that there remains a significant portion of our population that is not immune to COVID,” C. Buddy Creech, director of the Vanderbilt Vaccine Research Program and associate professor of pediatric infectious diseases, told ABC News.

More than 90 million Americans are currently unvaccinated — including 51 million children under the age of 18.

Since the onset of the pandemic, nearly 7.4 million children and adolescents have tested positive for coronavirus, and in the last week alone, approximately 170,000 pediatric cases were reported, according to a new report from AAP and CHA, released on Monday.

“I think it is concerning to see these rates increasing,” Dr. Lee Beers, the AAP president, told “GMA3” on Tuesday. “It’s been a long, almost two years, and everyone is tired and everyone is frustrated and that’s all the more reason for us to be coming together to work together to really try to beat this thing and I think our kids are struggling.”

Since the first week of September, there have been nearly 2.3 million child cases — nearly a third of the total pediatric cases reported since the onset of the pandemic — and over the last month, pediatric COVID-19 related hospital admissions have increased by 33%, according to federal data.

“As children make up a larger portion of the unvaccinated population, they will account for a higher percentage of cases,” added Moffitt.

Although young people have largely been spared from acute COVID-19 illness, experts stress that children are not immune from the virus. According to the CDC, children are as likely to be infected with COVID-19 as adults and the virus now one of the top 10 causes of death for children ages 5 through 11 years.

There continues to be the misconception, among some, that children and teenagers may not be as severely affected by COVID-19 as adults, explained Creech. While that seemed to be the case early on in the pandemic, the delta variant proved otherwise.

“We began to see far more infections in children, some of which were severe. In addition, we continue to see long COVID, myocarditis, and multisystem inflammatory syndrome in children who appear to have very mild symptoms at the outset,” said Creech.

With less than a third of the pediatric population — those under 18 — fully vaccinated, officials, health experts and pediatricians alike have been urging parents to get their children vaccinated.

“If your child is five years of age and older, please get them vaccinated. We need to protect the children,” Dr. Anthony Fauci, chief medical adviser to the White House, told George Stephanopoulos on ABC News’ “This Week” earlier this month. “This idea that children are not vulnerable at all is not so.”

President Joe Biden echoed Fauci’s sentiment on Tuesday, pleading with all families to get their “children protected today.”

“If your children are not vaccinated, please get them vaccinated,” Biden said. “If you’re a parent, understandably you waited – to see how the first shots went with other kids, before getting your own kid vaccinated, you can stop waiting.”

However, about two-thirds of parents of elementary school-aged children are either holding off on getting their younger children vaccinated or refuse to do so, according to another recent Kaiser Family Foundation poll, conducted before the discovery of omicron.

Notably, the agency has yet to identify any concerns with the temporary heart inflammation known as myocarditis, a potential side effect of mRNA vaccines seen in rare circumstances in teenagers and young adults.

“We haven’t seen anything yet,” Walensky told ABC News Chief Medical Correspondent Dr. Jennifer Ashton. “We have an incredibly robust vaccine safety system, and so if [problems] were there, we would find it.”

There is still not enough data to indicate how omicron will affect children, or whether it will potentially cause severe illness, compared to earlier variants.

Preliminary evidence indicates that omicron spreads at a rate two to three times faster than the delta variant, which experts say could result in a surge in COVID-19 cases, particularly among the unvaccinated.

“With delta, and now with omicron, we see the virus seeking and finding those who are either unvaccinated or whose circulating antibody levels have waned,” Creech explained.

Preliminary data from South Africa estimates that children had a 20% higher risk of hospitalization in the country’s omicron-driven fourth wave, given the fact that so many children were still unvaccinated, and therefore, unprotected.

Late last week, the potential timeline for vaccines for children under 5 was pushed back after early data suggested that two lower doses of the Pfizer vaccine was not as effective for kids ages 2 to 5 as it was for the 16 to 25 population. Thus, scientists will add a third dose and see if the vaccine is as effective. Authorization for those 5 and younger may not come until the second quarter of 2022.

Experts therefore say it is critical for all those eligible to get vaccinated, in order to protect children who are still too young to get the shot.

“Vaccination will prevent infections, and fewer infections will mean lower transmission. Vaccinating everyone in a household who is able to be vaccinated will bring an added layer of protection to the entire household,” said Moffit.