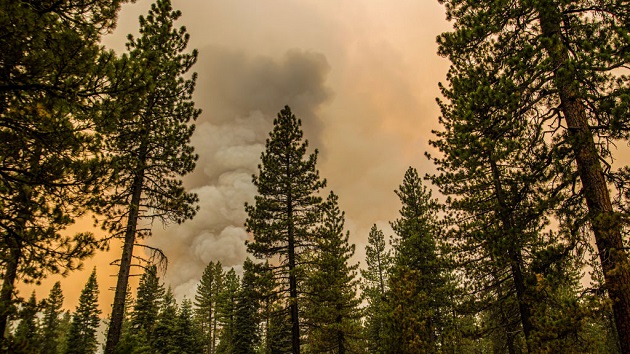 (NEW YORK) — Scientists are learning more about how widespread wildfires affect human health — and if there is a link between severe COVID-19 cases and regions that experience fires on a regular basis.

In 2020, a record-breaking fire season in the U.S. saw more than 10.2 million acres scorched in wildfires, according to the National Oceanic and Atmospheric Administration. Both California and Oregon had historic wildfire seasons, and several small towns were destroyed in California, Oregon and Washington, according to NOAA. The dense smoke from the wildfires produced hazardous air quality for millions of people in the U.S. for weeks, the agency said.

Increases in the fine particulate matter from the wildfire smoke, the pollutant in smoke that poses the greatestrisk to health, were associated with spikes in severe COVID-19 cases and deaths in many counties in three West Coast states in 2020, according to a study published Friday in Sciences Advances.

They found that wildfires had the largest potential effect on COVID-19 cases in the counties of Butte, California, and Whitman, Washington, where 17.3% and 18.2% of total cases, respectively, were attributable to high particulate matter levels on wildfire days, according to the study.

Wildfires had the greatest potential influence on COVID-19 deaths in Butte and Calaveras counties in California, scientists said. The COVID cases analyzed were based on reported tests, which covers more than 95% of the population in the three states, according to the study.

The effects on COVID cases from the wildfire smoke were observed up to four weeks after the exposure to the particulate matter, the researchers said.

“This is really attributable to the wildfire events, which is concerning us,” Dominici said, adding that they “keep coming” as a result of climate change.

While recent studies had reported that short-term exposure to particulate matter associated with increased risk of COVID-19 cases and deaths, the degree of how much the 2020 wildfire season exacerbated the severity of the pandemic had not been clear, the researchers said.

The scientists believe the research will likely apply to the 2021 fire season, which is already on track to break more records due to an early start caused by a megadrought and climate change.

“Especially for the unvaccinated,” Dominici said. “I think the vaccinated people will be more protected this year for having less severe cases.”

Dominici continued, “If I were to conduct the the same study among the unvaccinated, I think the results would probably be the same, if not even worse, as we have been learning that the delta variant is even more contagious.”