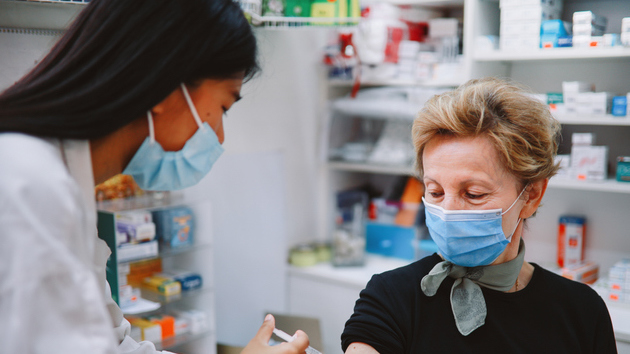 (NEW YORK) — In the next month, millions of Americans will get ready to roll up their sleeves for a third dose of the COVID-19 vaccine. But when it comes to booster shots, it’s not as simple as ‘more is more’ — it’s also a matter of when.

For severely immunocompromised people, a third dose of the COVID-19 vaccine is available now. Come mid-September, that option is expected to be open for everyone who got Pfizer or Moderna vaccines, at least eight months after their second dose.

Health experts caution not to jump the gun — or the line — on when you might actually need a booster shot.

With patience, a better immune response

“We have to look at both sides of the equation — the benefits to be reaped and the safety of giving an additional dose,” Dr. William Schaffner, professor of preventive medicine and infectious diseases at Vanderbilt University Medical Center, told ABC News. “You’ll get a more robust immune response if you wait a little longer before you get your booster.”

The COVID-19 vaccines continue to be safe and effective against severe disease and hospitalization. And when immunity wanes, it does so gradually, experts say, with current data suggesting all three of the authorized vaccines provide good protection at least six months after initial vaccination and likely longer.

The Biden administration announced availability of booster shots would begin ahead of any ruling from the Food and Drug Administration or Centers for Disease Control and Prevention advisory groups.

Wary of delta’s exponential spread, federal health officials are attempting to preempt the possibility of a greater surge should vaccine efficacy dwindle.

“We are concerned that this pattern of decline we are seeing will continue in the months ahead,” Surgeon General Dr. Vivek Murthy said at a briefing Wednesday.

“You don’t want to find yourself behind playing catch up,” said Dr. Anthony Fauci, chief medical adviser to the White House.

It’s a careful narrative aimed at keeping confidence that vaccines still work — while preparing the public for another round of shots if protection against hospitalization and deaths ebbs.

Even in announcing the step toward boosters, the nation’s top health officials emphasized most fully vaccinated Americans “still have a high degree of protection from the worst outcomes of COVID-19.”

“We are not recommending that you go out and get a booster today,” Murthy said.

“We don’t have data that suggests you benefit from having the additional dose of the vaccine before your immunity drops off,” said Jay Bhatt, an internist, geriatrician and ABC News contributor, adding anxious Americans shouldn’t feel tempted to get a booster earlier than eight months.

Getting a booster shot too soon may be counterproductive. Those who wait extend their “runway” of immune protection further.

“Because of all these breakthrough milder infections, and the diminution in antibody levels, those things combined to make the task force antsy and wanting to not wait,” Schaffner said.

Let the most vulnerable go first

Additional third doses should be prioritized first for the most vulnerable and those who were first given vaccines in December and January, experts say. Those people include nursing home and long-term care facility residents and staff, elderly Americans and front-line health care workers, for whom even a mild case of COVID could risk an entire hospital ward.

“There’s real concern among nursing home residents and their loved ones about getting sick again,” Bhatt said.

The same day federal officials previewed coming boosters, the CDC released several studies showing that although the vaccines are highly effective against severe disease, protection against infection may peter out over time.

Health officials don’t want to wait until the nation gets stuck behind the pandemic eight ball again, but some experts worry the move was premature.

Dr. Jeremy Faust, an emergency medicine physician at Brigham and Women’s Hospital, is skeptical of boosters for the broader population so soon.

“The risks are unknown, and the benefits are unknown. I can’t, as a responsible physician, give someone advice, when I haven’t been able to weigh those two things,” Faust said, cautioning against taking a “shot in the dark.”

Waiting for the data

Pfizer and Moderna have gauged side effects from a third shot tantamount to the primary course — fever, sore arm and fatigue — while the rare risk of more serious side effects, like myocarditis, remains.

Faust points out the clinical trial data and real-world success of the vaccines have been an undeniable “slam dunk” thus far, but third doses are uncharted territory.

“The science on this is unavailable. And that’s not a place where we’ve been before,” Faust said, noting the risk of myocarditis has shown to happen more frequently after the second mRNA dose.

Boosters are meant to fortify the vaccine’s still-robust strength over time, but it’s a unique time frame for each individual’s optimized immunity.

“It’s a little bit of a Goldilocks moment. Where do you want to put down your bets?” NIH Director Dr. Francis Collins said in a recent interview on MSNBC. “We think because lives are at stake if we are going a little early, I’d rather be in that space than be a little late.”

“The COVID virus precipitates decision-making, when one has less than an ideal amount of data,” Schaffner said. “You always want more.”

Jess Dawson, M.D., a masters of public health candidate at Johns Hopkins Bloomberg School of Public Health, is a contributor to the ABC News Medical Unit.