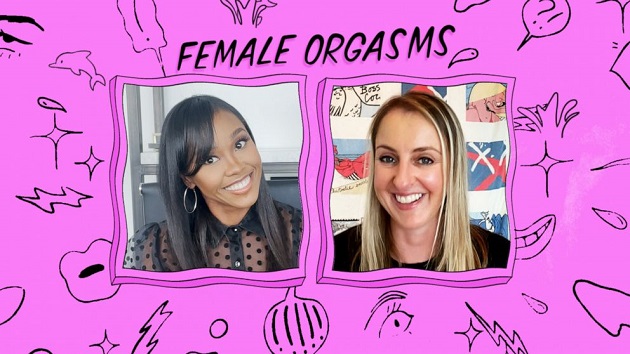 (NEW YORK) — In a society where women face all kinds of disparities, there is one gap that women may not know about, even though it can lead to shame, guilt and unanswered questions.

That is the “orgasm gap,” a term coined by health experts based on data that shows that, in heterosexual relationships, women on average are having fewer orgasms than men, by as much as 95% for men compared to 65% for women, according to one study.

Lesbian women also have significantly more orgasms, while for men, the orgasm rate doesn’t vary much with sexual orientation, the data shows.

“There’s a huge discrepancy and part of the reason is lack of knowledge,” said Dr. Nita Landry, a Los Angeles-based OBGYN. “We just have to talk about it or, otherwise, we’re just going to keep having the sex life that we have overall as women, and that gap is going to continue to be there and nothing is going to change.”

An orgasm, considered the peak of sexual pleasure, is a physical reflex that happens when muscles tighten during sexual arousal.

The miseducation around women and orgasms goes back centuries, according to Katharine Smyth, a Brooklyn-based author whose own self-doubt about not being able to orgasm led her to research the topic for an article titled “The Tyranny of the Female Orgasm-Industrial Complex.”

“Going back as far as Aristotle, who believed that only women with fair skin and fair hair could have orgasms, it’s been shrouded in just a series of misconceptions, one after the other,” said Smyth. “And another thing I realized when I was doing the research is that a lot of women just don’t … know that much about their bodies.”

The historically male-dominated medical field hasn’t helped women completely either, as researchers and doctors have not solved the puzzle of what prevents orgasm in women, and how to treat it medically.

“I think it all started a long time when someone just laid down this narrative about what sex was supposed to look like, and when they spelled out the narrative … they really focused on men,” said Landry. “They looked at what a sexual encounter looked like for a typical man and what brought that man pleasure and then they just said, ‘Oh, by the way, this is going to work for women too."”

“The problem is, that’s not how it works,” she said.

Here are five myths about female orgasms explained and corrected by Landry and Smyth.

Myth #1: Women need to orgasm to have pleasurable sex.

When Smyth got divorced at age 34 and started dating again, she says she encountered a series of men who did not believe she was enjoying sex without orgasming.

“Some actually broke up with me, because I couldn’t have an orgasm,” she said. “The thing that was really frustrating for me was that they kept saying, ‘You’re not enjoying sex enough?’ and I would say, ‘No, I’m really enjoying sex. I’m having a great time."”

“That was just such a frustrating feeling to kind of be told that I wasn’t enjoying myself enough,” recalled Smyth.

An orgasm is something that happens to some women, but not all, and is not the only sign of a successful sexual experience, according to Landry.

Don’t make the orgasm, the goal, make pleasure the goal

Landry explained, “A big part of it is making pleasure your goal. Don’t make the orgasm, the goal, make pleasure the goal.”

Myth #2: Women can only orgasm through penetrative sex.

While popular culture tells us otherwise, for women, having an orgasm through penetrative sex, or intercourse, is much less of a guarantee than it is for men.

A long held piece of data, published in Elisabeth A. Lloyd’s 2006 book, “The Case of the Female Orgasm,” found that around 75% of all women never reach orgasm from intercourse alone.

More recent data, published in The Journal of Sex and Marital Therapy in 2017, found that just 18% of women in the United States orgasmed through intercourse alone. Nearly 40% of women meanwhile required clitoral stimulation to experience orgasm.

The clitoris is the pleasure center of the vulva, the outer part of female genitals. In many cases, due to women’s anatomy, the clitoris does not get adequate stimulation with penetration, according to Landry.

“When patients come to see me, a lot of times some of them actually come in disappointed that they’re not able to have an orgasm from just penetration.,” she said. “And then I’ll say, ‘Okay, well, can you have an orgasm with clitoral stimulation?, ‘and they’re like, ‘Oh, yeah, well, that’s fine,’ but that’s not the orgasm that they want.”

“It’s a matter of just educating them and just making sure that they understand they are not broken, they are not abnormal,” continued Landry. “It’s just that they’ve been taught that that’s what sex is supposed to look like for everybody, when that’s not the case.”

Myth #3: Women have to just fake it until they make it.

Meg Ryan’s famous orgasm scene in “When Harry Met Sally” may have put faking an orgasm in the spotlight forever, but women don’t need to fake it.

While there is not yet a pill or prescription for the female orgasm, there are things that can be done to help, if that is what a woman wants, according to Landry.

“Based on the research that we do have, your best treatment options are going to be centered on therapy,” she said, noting a specific option called cognitive behavioral sex therapy. “A lot of times [therapists] will start with education and educating women about their bodies, and helping women to figure out what they like … and they’ll also talk about behavioral stuff and relationship stuff.”

Women can also do things on their own, like exploring their own bodies to know their pleasure points and practicing mindfulness outside the bedroom.

“You can start by doing simple things like when you are eating, just being in that moment, and paying attention to how the food feels in your mouth and how that tastes,” said Landry, adding that if your mind wanders, practice bringing it back to the moment. “It’s a skill that you learn, and then you take that into the bedroom.”

Landry also recommends that women look at what could be putting the brakes on their sex life, which can include everything from certain medications and medical issues like endometriosis to body issues, relationship conflicts, stress and a history of abuse or trauma.

Misconception #4: It’s up to a man to decide how a woman is pleasured:

Landry uses the phrase “communication is lubrication” with her patients to let them know they need to express their sexual desires and pleasures with their partners.

“When it comes to female pleasure, it is very important for you to know what you like so that you can communicate that to your partner,” she said. “Sometimes what happens is men will come into a relationship knowing what worked for their other partner or partners, and they’ll try those same things that might not work for you.”

Myth #5: Women who don’t have orgasms are broken.

Smyth’s article on female orgasms prompted the biggest response she said she has received on any article she’s ever written.

“The majority were women who were saying, ‘Thank you so much for writing this. I thought there was something wrong with me, I thought I was broken,"” said Smyth. “There were a lot of people whose partners had broken up with them because of it, or had made them sort of feel inadequate because of it.”

Not only are women who either don’t orgasm or don’t worry about orgasming not broken, they’re perfectly normal and actually in the majority, according to the data.

“And if you’re feeling frustrated about your orgasm, try and fix that for you, not for a man,” she said.

GoodMorningAmerica.com is tackling a different taboo women’s health topic each month, breaking down stigmas on everything from mental health to infertility, STDs, orgasms and alcoholism.