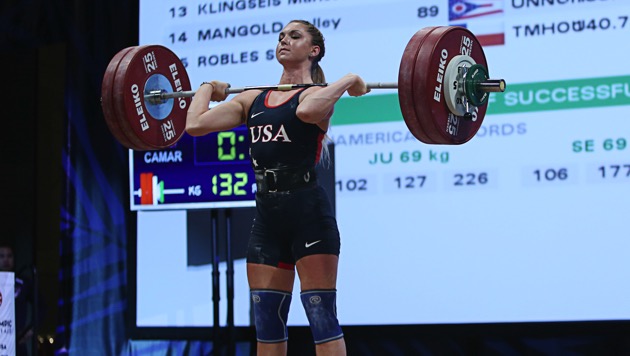 A week later, she had to lay down on the floor while training when the cramping she’d been feeling during those championships turned into an “overwhelming, stabbing feeling,” she told Good Morning America.

Rogers, 25, was doing her job while also managing her reproductive health, and just as she was working to finally qualify for the Olympics, her body threw her “a perfect storm.”

Her story represents what many go through trying to figure out which contraceptive method works best for their body and lifestyle, although many experience it silently due to stigma. Rogers, however, chose to share her story with hundreds of thousands of followers, helping to shed the idea that it’s all smooth sailing for everyone just because few people talk openly about it.

Before the Pan Americans, Rogers said she had an IUD inserted. She’d been using a NuvaRing — a hormonal contraceptive manually inserted for weekslong periods — and “was super happy with it, but it was very inconvenient with traveling internationally” as it requires refrigeration and frequent prescriptions.

She and her coach also wanted to see if an IUD would help with her performance by reducing menstrual symptoms.

“I have the same symptoms everybody has: cramps, just fatigue, and I got a lot of lower back stiffness and tightness, which obviously interfered with training,” Rogers told GMA.

Hormonal IUDs can help with period symptoms, according to Dr. Melissa Dundas, an adolescent medicine physician in New York and a fellow with Physicians for Reproductive Health.

After competing well enough to have her Olympic spot more or less guaranteed, Rogers went for the insertion, deciding at her doctor’s recommendation to get the Kyleena IUD.

“(The doctor) was like, ‘Oh, it shouldn’t be bad, just a little bit of cramps, it’s fine.’ And it was the most miserable experience ever,” Rogers laughed.

Dundas told GMA she often recommends patients take over-the-counter pain medication, like Motrin or Tylenol, before they come in for insertions.

Rogers took to Instagram to share her experience with her 651,000 followers, who are used to seeing updates on training and life in Florida with her three cats and husband.

She said she wanted to talk about her IUD because she felt unprepared, but also because she’s had trouble finding easily digestible information for the average person — or athlete — on the real experiences of reproductive health options.

As a doctor who worked with many young athletes and was one herself, Dundas was “motivated” to hear an athlete shared her story, “because she’s clearly not the only person that has questions or concerns.” She recommends patients discuss contraceptive options with health care providers, especially because there are so many options to tackle a variety of issues and solutions.

“It’s definitely a conversation that needs to be had, and more openly with everybody, because it is an additional factor that athletes who have a uterus need to deal with,” she said, “and they need to be able to have support and information surrounding that so they can perform optimally at the sport they do.”

Since she got the IUD, Rogers has kept her followers updated. Many responses, she said, have been thankful for her openness while they consider their own options, including trying to find what works best for athletes.

“I feel kind of bad cause I don’t really have any answer,” she said. “I can only say my personal experience.”

“I think it is incredibly empowering for individuals to share those stories, but then also with the caveat that that’s their own individual story and may not necessarily be the same outcome for somebody else,” she said.

Rogers shrugs off the question of feeling comfortable talking about her reproductive health. For one thing, she openly discusses period management with her coach and they plan training around her cycle.

For another, “Growing up, my mom was an anatomy teacher at my high school, so we just had to hear all body things all the time and it’s just not a weird thing in my world.”

Plus, she added, “I mean, I definitely overshare all the time anyway, so it doesn’t feel as weird as it probably is.”

After she got the IUD, Rogers said she had cramps essentially every day for over a month, although it has “gotten better each month.” Dundas recommends patients assess a new contraceptive for three to six months as your body adjusts to it.

Cramping and irregular spotting or bleeding are possible after an IUD insertion, Dundas said, although the severity varies widely for patients, spanning from a few days to up to six months.

“Unfortunately, we don’t have a magic eight ball to see which individual is going to have cramping only for a few days versus a couple of months,” she added.

Ultrasounds revealed the pain after the Pan American Championships was caused by “a giant ovarian cyst” rupturing, Rogers said, adding that she doesn’t know if it was related to the IUD.

Cysts are listed as a possible side effect of Kyleena, although, Dundas notes, while cysts can happen in people who have IUDs, there’s no known causal relationship between IUDs and cysts. Cysts are common for people with uteruses during reproductive years and a majority are benign. They can rupture during strenuous exercise.

By mid-May, Rogers was formally named to the USA weightlifting team for the Tokyo Olympics, which begin July 23.

When Rogers spoke with ABC News in late June, she was thinking she’d go through the Olympics with the IUD.

At that point, she was gearing up for the USA Weightlifting National Championships, which she and her coach joked would be “a good test run” as she expected to have her period during competition.

Why flu and strep A can be so serious in children