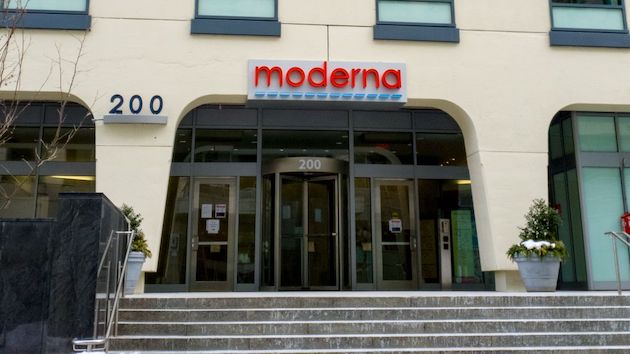 (NEW YORK) — Moderna’s bid for FDA authorization for its two-dose vaccine for children comes with lower efficacy against infection than previous vaccines, but the company and some experts say it will offer strong protection against illness from tougher strains like Omicron.

The pharmaceutical company submitted the request on Thursday to the Food and Drug Administration to authorize its two-dose vaccine for kids 6 months to 5 years old.

Moderna CEO Stéphane Bancel said in a statement, “We believe mRNA-1273 will be able to safely protect these children against SARS-CoV-2, which is so important in our continued fight against COVID-19, and will be especially welcomed by parents and caregivers.”

The vaccine was found to be roughly 51% effective against infection for children under 2, and 37% effective among children 2 to 5. Importantly, the study was performed mostly during the Omicron surge. When the vaccines were first released in early 2021, Moderna’s vaccine efficacy was 90% for children 5-11 years old.

Dr. Paul Offit, director of the Vaccine Education Center at Children’s Hospital of Philadelphia, says that it’s not fair to compare efficacy from the early trial days to today. When the Moderna vaccine trial was being tested for 5-11 year olds, Delta was the predominant variant and the vaccine was shown to be 90% effective, he noted.

But the new vaccine was shown to be 37% effective when Omicron was predominant, he noted.

“It’s not that Omicron is more contagious, it’s that it’s more immunoevasive, Offit told ABC News. “Even if you have been vaccinated with two doses of the vaccine, you are not going to be as well protected against mild illness as you would against Delta and that’s the problem.”

Notably, these efficacy numbers are roughly equivalent to the protection against Omicron infection that you would expect to see among adults who also got a two-dose vaccine.

What about protection against severe illness?

No children in the Moderna study became severely sick, the company reports. The company was unable to provide an efficacy estimate for its ability to prevent severe illness. But, given evidence that children in the trials developed an antibody response similar to that in adults, there’s hope that the vaccines will offer strong protection against serious illness.

“You will have trouble doing a trial big enough that is going to find serious illness in the less than 6-year-olds” Offit said. But among children 5 to 11 during the Omicron wave, while effectiveness against mild disease was low, there was good protection against severe illness which he says is the goal of the vaccine.

Among older children 5-11, being vaccinated dramatically reduced the risk of winding up in the hospital, with the CDC estimating that 9 out of 10 children who were hospitalized during the omicrons surge were unvaccinated.

ABC News contributor Dr. Alok Patel of Stanford Children’s Health says of the most recent Moderna trial, “It was safe, and there were no reported cases of serious adverse events or myocarditis or heart inflammation.”

According to a Moderna press release from March on the clinical trial, fever greater than 40 degrees Celsius was seen in only 0.2% of children per age group. In addition, there was no pericarditis, multisystem inflammatory syndrome in children (MIS-C) or death in the study. No study pause rules were met and no safety concerns were identified in either age group during the clinical trial.

When can we expect the FDA to make a final decision?

It will be up to the FDA and its advisors to debate and discuss the merits of Moderna’s application, which will tentatively take place in June.

“I think every day that [kids] are without a vaccine is obviously another day that somebody can get infected, can get hospitalized. So I would hope that, you know, they can move as quickly as possible,” Dr. Paul Burton, chief medical officer at Moderna, told ABC News.

“It will hopefully tell parents that this vaccine is not only safe, but it will prevent against severe illness, hospitalization—which is the goal of vaccines,” Dr. Patel said.

One dead, 11 sickened in Legionnaires’ disease outbreak in California county