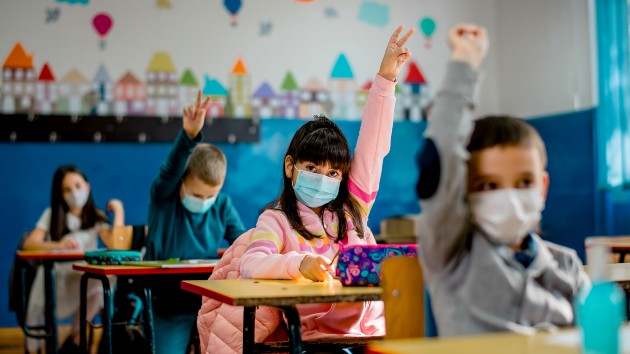 (NEW YORK) — As COVID-19 vaccinations increase and cases begin a downward trend, states are slowly rolling back health guidance such as limited crowds and mask wearing. But there is one group that health experts and state leaders still recommend should mask up: children.

In Michigan, several outbreaks of cases have been reported over the last few weeks, including some in child care centers. The state is now mandating masks for children over 2.

Many states still have a masking policy for students who take classes in person or are in daycare, though most haven’t implemented a stricter approach to mask mandates for kids.

Health experts told ABC News that keeping kids masked in indoor and group settings is still necessary and will speed up the nation’s recovery from the pandemic. Dr. Kengo Inagaki, a pediatric infectious disease specialist at the University of Michigan C.S. Mott Children’s Hospital, said the U.S. still has a ways to go in its vaccination efforts, and transmission is still a problem.

“People of any age can share the virus,” he told ABC News. “So even with kids, it’s best to have them wear the mask to reduce the risks.”

Inagaki and other health experts noted that these mask mandates will not be permanent and their repeals will depend on how quickly the adult population can curb cases.

As part of its recent health order, the Michigan Health Department cited recent stats on outbreaks in settings involving children and teens.

“As of April 8, local health departments had reported 312 new and ongoing outbreaks among K-12 schools, with 48 of those outbreaks reported in the week prior. Additionally, there are 329 identified clusters among minors participating in school and club sports since January 2021,” the health order said.

The order will stay in place until May 24 at the earliest.

Inagaki said there is overwhelming evidence that schools are safer than other locations, provided that kids and staff wear the masks and keep social distance. However, he said, the rising threat of COVID-19 variants makes the situation harder.

“Generally speaking, most infections happen outside the school rather than inside,” Inagaki said. “However, it can be brought in the school if precautions aren’t taken.”

Plus, kids aren’t eligible for vaccines yet. As of April 27, only Americans over the age of 16 can receive a vaccine, as researchers are currently undergoing trials on younger patients.

For adults, the growing vaccination numbers have led to new mask guidance issued by the Centers for Disease Control and Prevention on Tuesday that will allow fully vaccinated Americans to go maskless outdoors where there aren’t big crowds.

Dr. John Brownstein, an epidemiologist at Boston Children’s Hospital and an ABC News contributor, said federal health agencies will offer updated COVID-19 guidance for children soon. He predicted health officials will follow suit and ease mask mandates for kids in indoor settings as vaccinations go up and as cases go down.

“There will be broad rules about masking that will be in play, and that will be highly dependent on how much we reduce transmission,” he said.

Brownstein said even if it takes a longer time to vaccinate teens and kids, there could be a precedent to lift mask mandates for younger Americans. If transmissions are low enough, then a general rollback on masks would be safe, he said.

“Even if children aren’t vaccinated, they should be able to benefit from the mass immunizations,” Brownstein said.