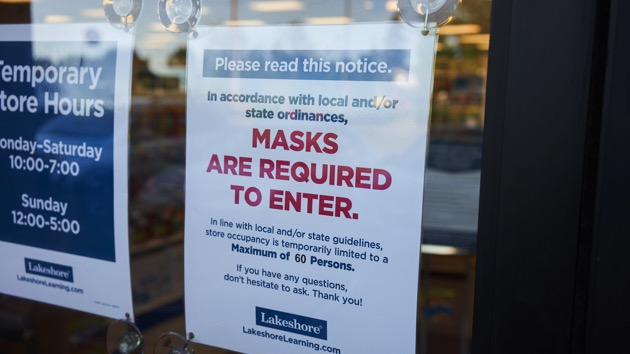 Alabama will lift its mandate in about a month, Gov. Kay Ivey announced Thursday. She said that beginning on April 9, wearing masks will be “a matter of personal responsibility and not a government mandate.”

“Cases in the country are leveling off at rates just on the cusp of potential to resurge,” CDC Director Rochelle Walensky said at a Wednesday briefing on the reopenings. She added the COVID-19 variant that first emerged in the UK, known as B.1.1.7, “looms ready to hijack our successes to date.”

She stressed it is “critically important” that “individuals wear a mask, socially distance and do the right thing to protect their own health.”

Texas Gov. Greg Abbott announced Tuesday that “Texas is OPEN 100%” and the mask mandate, in effect since July, would expire March 10. He cited lower COVID-19 hospitalizations and a virus positivity rate that has been declining for two months straight.

The Lone Star State has recorded more than 2.3 million cases of COVID-19 — with nearly 5,000 new cases Wednesday — and more than 43,500 fatalities since the start of the crisis, according to state data. The state is averaging 297 deaths a day, according to The Covid Tracking Project’s seven-day average.

Cases have fallen in the state since January and the percent positivity rate for the last month is 10.96%, according to Johns Hopkins University. Only 7.63% of the state’s population has been vaccinated.

“Starting tomorrow, we are lifting all of our county mask mandates and businesses will be able to operate at full capacity without any state-imposed rules,” Reeves said in a Facebook post. “Our hospitalizations and case numbers have plummeted, and the vaccine is being rapidly distributed. It is time!”

Iowa adopted a mask mandate in November, but in February Gov. Kim Reynolds lifted it saying, “We know what we need to do and it doesn’t require a government mandate to do it.”

Montana Gov. Greg Gianforte allowed the state’s mask rule to expire in February but said local authorities could enforce their own mandates.

North Dakota issued a mask mandate in November 2020 that expired in January. Officials didn’t renew it due to a drop in cases and hospitalizations, while allowing for local safety protocols to be enacted.