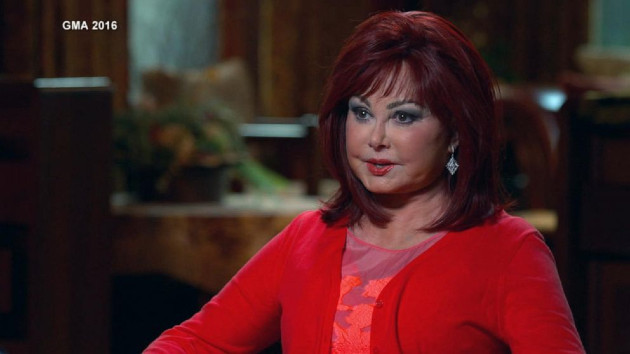 (NEW YORK) — As the country music world mourns the loss of Naomi Judd, the legendary singer is being remembered for the way she spoke publicly about her battle with mental health, opening up about a struggle that is often kept private.

Judd’s death at the age of 76 was announced Saturday by her daughters, Ashley Judd, an actress and activist, and Wynonna Judd, with whom she performed as part of the duo The Judds.

The sisters wrote in a statement that they “lost our beautiful mother to the disease of mental illness.”

“Today, we sisters experienced a tragedy. We lost our beautiful mother to the disease of mental illness,” they said in a statement. “We are shattered. We are navigating profound grief and know that as we loved her, she was loved by her public. We are in unknown territory.”

Naomi Judd, who was to be inducted into Country Music Hall of Fame, a recognition her daughters received on her behalf, told ABC News’ Good Morning America co-anchor Robin Roberts in 2016 about her battle with what she called treatment-resistant depression and anxiety.

“When people meet me, they think, because they see me in rhinestones, you know, with glitter in my hair, that really is who I am,” Naomi Judd said, speaking of her fans. “I’m sort of a fantasy ’cause I want to provide that for them, but then I would come home and not leave the house for three weeks and not get out of my pajamas, not practice normal hygiene. It was really bad.”

The “Love Can Build a Bridge” singer said her battle with depression began six years prior, in 2011, during The Judds’ encore tour and the airing of their reality TV show. Two decades earlier, in 1991, the mother-daughter duo had stopped performing together after Naomi Judd was diagnosed with hepatitis C.

Judd told Roberts she battled a “completely debilitating and life-threatening” depression that led to several stints in psychiatric wards, where she was treated with a heavy regimen of medication and electro-convulsive therapy.

Another part of Judd’s treatment for depression was to confront a difficult past that she said includes being molested by a member of her family at the age of 3.

“Nobody was there for me. In a way, I had to parent myself,” she told Roberts. “I realized that I got a raw deal, OK, now I’m a big girl. Put on your big girl pants and deal with it, and I started in therapy.”

Judd told Roberts her treatment got her to a place where she practiced “radical acceptance” and found joy in her everyday life.

She wrote about her mental health journey in the 2016 book, River of Time.

“I want someone to be able to see that they can survive,” she said. “It’s not just to help the people that have depression. It’s so the people around them can understand this is a disease.”

In addition to her daughters, Judd is survived by her husband of over three decades, Larry Strickland.

Reading from her own book in the interview with Roberts, Judd spoke about being “still here” after her battle with depression.

“My everyday life is not only manageable, it’s even enjoyable once more. I laugh a lot. I have told my story and you can tell yours. You’re not alone. I am still here,” she said.

In their acceptance speech Sunday at the Country Music Hall of Fame, Judd’s daughters said they were sorry their mom “couldn’t hang on” to accept the honor.

“My mama loved you so much, and she appreciated your love for her. And I’m sorry that she couldn’t hang on until today,” Ashley Judd said through tears while accepting on her mom’s behalf. “Your esteem for her and your regard for her really penetrated her heart and it was your affection for her that did keep her going in these last years.”

“This is the first time I’ve talked since saying goodbye to her,” said Wynonna Judd, describing herself as both “broken” and “blessed.” “At 2:20, I kissed her on the forehead, and I walked away … the last thing we did together as a family with her is…we all gathered around her and we said ‘The Lord is my shepherd…"” before continuing to recite the 23rd Psalm.