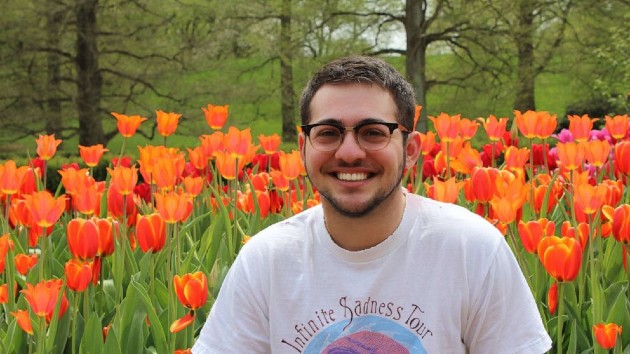 (NEW YORK) — When Alex Freeman, 22, a member of the transgender community, seeks medical care, he immediately braces himself for confusion, questioning or potentially life-endangering mistakes.

While undergoing top surgery two years ago, Freeman, of New Brunswick, New Jersey, said he was misidentified as a cisgender man, even though he was in the hospital for a surgery that has to do with being transgender.

More recently, while trying to get treatment for eczema, Freeman said he had to search for care after his dermatologist was unsure how potential medications would interact with his gender-affirming hormone therapy.

“It wasn’t coming from a mean place, but [the dermatologist] was confused nonetheless,” said Freeman, a recent graduate of Rutgers University. “I felt very defeated.”

Freeman, who began his transition the summer before his freshman year of college, said the anxiety of going to the doctor has led him, in some cases, to avoid going altogether.

“Even going to a gynecologist is something I’ve only done once,” he said. “Both of my grandmothers had cancer but I’d rather just not go, which is dangerous.”

As a member of the transgender community, people whose gender identity differs from the sex they were assigned at birth, Freeman is not alone in feeling discriminated against while seeking medical care, data shows.

Among the more than one million transgender people in the United States, nearly one-third report being refused medical care or harassed by medical professionals because they are transgender, according to the 2015 U.S. Transgender Survey, released by the National Center for Transgender Equality.

“We’re so used to thinking of doctors as knowing everything, so to go in and be met with these uncertainties is scary,” said Freeman. “It’s taken a lot of resolve and resilience for me to keep chipping away and stop apologizing for being a difficult patient, because there’s nothing to apologize for.”

Discrimination can come in many forms

For Naomi, 22, a transgender woman in Ann Arbor, Michigan, the anxiety around going to the doctor’s office comes from the microaggressions, the self-described “jabs,” she says she encounters frequently.

“I remember going to the doctor for stomach cramps and after I had sat with the doctor and they examined me, they crossed out female on my chart and wrote in male,” she said. “I remember feeling again that it was just another reminder, like hold your horses.”

“I’ve had other doctors say, ‘What’s your legal name?,’ after I tell them my name is Naomi,” she said, referring to her preferred name. “That’s the last thing I need to hear.”

The discrimination transgender people may face at hospitals’ and doctors’ offices can come all the way from the doctor, who may assume that any health issues are related to the patient’s gender identity, to the front office staff who may question or use the wrong name or wrong pronoun for the patient, according to Sara E. Wiener, LMSW, director of the Comprehensive Gender Services Program at Michigan Medicine.

“I hear from patients who say, ‘When I went to such and such hospital system’s emergency room, they wouldn’t touch me. They put on extra pairs of gloves. They didn’t want to look at me. They used my birth name and not my preferred name and I felt like I was a monster,” she said. “These are the kinds of things transgender people are dealing with and more.”

For transgender people who already face disproportionate rates of discrimination and violence and higher rates of mental health issues, experiencing discrimination in health care is doubly devastating, according to Wiener.

“When people are accessing health care, they’re in a vulnerable position, there’s something that’s not going so well,” said Weiner. “So being in a vulnerable situation and then being discriminated against is very painful and really stays with a person.”

Because being transgender is so connected to the body, a seemingly routine exam or check-up by a doctor can be fraught with anxiety, according to Aydin Olson-Kennedy, LCSW, executive director of the Los Angeles Gender Center.

For many transgender people, himself included, dealing with the overt discrimination, like being misgendered, is often easier to cope with than the more subtle biases and microaggressions that come so often, “It’s remarkable when it doesn’t happen,” explained Olson-Kennedy.

He recalled an incident where a technician giving him a heart test, during which she saw Olson-Kennedy’s top surgery scars, spoke for the entire test about her opposition to gender-affirming care for transgender youth.

“That is much harder to deal with than if I had walked in and she gendered me female,” he said. “It’s the emotional and psychological toll on the interpretation of things that is harder.”

Transgender people may also face more or less discrimination in medical settings just because of how they look, experiencing less discrimination if they follow gender norms, as experienced by La’Nae Grant, 37, of East Orange, New Jersey, who underwent gender affirmation surgery seven years ago.

“I hate that I can do certain things that certain transgender women can’t do because of the simple fact that they may look different,” she said. “How can you be biased when you’re looking at a body, a person?”

Transgender people like Grant who speak out about their interactions with medical providers all point out that they are privileged as trans people to even have access to medical care in the first place.

The discrimination transgender people say they face while seeking routine medical care comes against the backdrop of more and more states taking steps to restrict access to gender-affirming care, especially for transgender youth.

It also is still happening as the transgender community continues to grow. The number of gender-affirming surgeries increased fourfold over a span of 14 years, according to a 2018 study published in the Journal of the American Medical Association.

Dr. Ian Tong, chief medical officer of Doctor On Demand and a clinical assistant professor at Stanford University Medical School, is calling on the Centers for Disease Control and Prevention (CDC) to declare transgender care a serious public health threat, just as it did racism earlier this year.

In addition to the large data gaps in research that already exist for transgender people, most medical schools currently provide anywhere from three to five hours of education on LGBTQ care, according to Tong, who said medical students need to be trained not just in clinical competencies but also educated on implicit bias, the stereotype-confirming thoughts that can impede treatment.

More can also be done, according to Tong, to make sure that transgender patients are able to see more doctors who are also transgender, noting that visibility “has real impacts for people to walk into a doctor’s office and feel confident in being cared for.”

Transgender and gender nonbinary medical students and physicians are a small minority, and report facing barriers during medical training, including stigma, discrimination and having to hide their identities, according to a 2019 survey published in Transgend Health.

Olson-Kennedy said it’s not just a question of how many hours of education medical providers receive, but also what they are taught and how they approach patients, including taking more time.

“If what we’re doing is training people to behave a certain way and we’re not talking to people about shifting actual belief systems, then we’re in a cycle of train and no outcome,” he said. “We need to think about alternative ways that [doctors] can be interacting with [transgender] people.”

For many in the transgender community, gender-affirming doctors are found through word of mouth, online forums and, more recently, companies that connect patients to culturally and clinically competent doctors, a commodity hard to find depending on where a person lives, according to Colin Quinn, co-founder and CEO of one such company, Included Health.

“What we find often times is you might find a provider who is very welcoming and open to treating the [transgender] community, but they might not have the clinical competency to do so,” said Quinn. “In certain parts of the country, we’re kind of hitting our head against the wall to find providers.”

While the coronavirus pandemic made accessing competent medical care even more difficult for transgender people in many ways, it also brought a silver lining through the quick adaptation of telehealth, which has helped people access gender-affirming care regardless of their location, according to Quinn, who noted that telehealth is by no means the solution to the barriers the community faces.

“This matters 365 days a year,” said Freeman. “Transgender people are dealing with this every single day.”

What is next for Juul after FDA temporarily suspends ban of its e-cigarettes and other products?

Many Black children are dying by suicide, doctors say: Understanding the why — and how to help