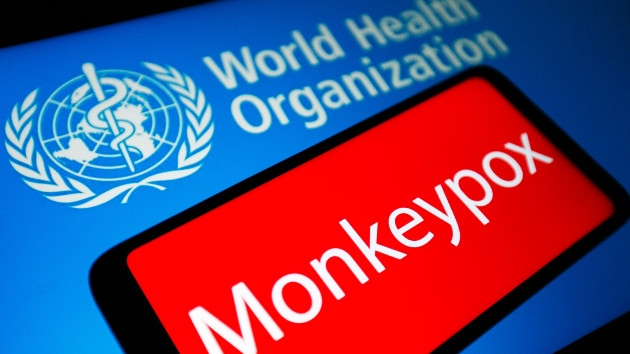 (NEW YORK) — The World Health Organization said Monday it doesn’t believe the monkeypox outbreak currently spreading around the world will turn into a pandemic.

Since May 13, at least 257 cases of the rare disease have been confirmed in 23 countries where the virus is not endemic — mostly in Europe and North America — and 120 are suspected.

Of those infections, 14 are confirmed or suspected across eight states in the U.S., according to the Centers for Disease Control and Prevention.

So far, no deaths have been reported in non-endemic countries.

The disease is not typically found outside of countries in central and western Africa, which has raised fears of community transmission.

According to the WHO, at the present time, there is no clear link between the cases reported and travel from endemic countries.

When asked during a public session Monday if the recent outbreak could turn into a pandemic, Dr. Rosamund Lewis, the WHO’s technical lead for monkeypox, replied, “The answer is we don’t know, but we don’t think so.”

“At the moment, we are not concerned about a global pandemic,” Lewis continued.

Other public health officials have said the risk for spread is generally low.

The WHO stated the majority of cases have been reported among men who identify as gay, bisexual or men who have sex with men. Monkeypox can still be transmitted to anyone with exposure to it.

“We are concerned that individuals may acquire this infection through high-risk exposure if they don’t have the information they need to protect themselves,” Lewis said.

She offered recommendations for people to lower their risk of infection, including avoiding those with confirmed or suspected cases of monkeypox and — if caring for someone with the disease — avoiding skin-to-skin contact, washing hands regularly, wearing a mask and cleaning contaminated surfaces.

“Collectively, the world has an opportunity to stop this outbreak,” Lewis said. “There’s a window of opportunity where this can be contained.”

When people are infected with monkeypox, it is generally a mild illness with the most common symptoms being fever, headache, fatigue, muscle aches, backache and swollen lymph nodes.

Patients can develop a rash and lesions that often begin on the face and extremities before spreading to the rest of the body. Symptoms usually last two to four weeks before dissipating.

Animals pass the disease to humans either through a bite or a scratch, and people can also catch monkeypox from preparing and consuming infected bush meat.

Human-to-human transmission occurs either through hugging, touching or prolonged face-to-face contact as well as by touching an infected person’s clothing or bedsheets.

The WHO said there are many “unknowns” about the outbreak including if the virus is being sexually transmitted or via close contact when engaging in sex. It’s also unclear whether monkeypox can spread if a person is asymptomatic.

However, officials stressed the risk to the general public remains low and shouldn’t be compared to COVID-19.

“Monkeypox is very different from COVID-19,” Dr. Sylvie Briand, the director of epidemic and pandemic preparedness and prevention at WHO, said during the public session. “We don’t want people to panic or be afraid and maybe think that it’s like COVID but worse.”