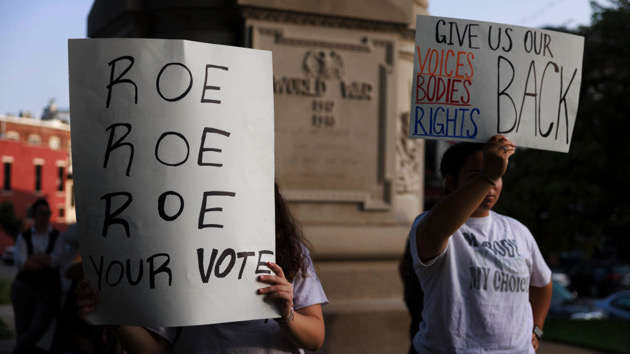 (NEW YORK) — The amount of time women will have to travel to receive an abortion has quadrupled from about half an hour to nearly two hours since the Supreme Court overruled Roe v. Wade this summer, a new study finds.

The decision — known as Dobbs v. Jackson Women’s Health Organization — determined that there is no constitutional right to an abortion and gave individual states full power to regulate abortion.

Researchers from several institutions, including the University of California, San Francisco; Boston Children’s Hospital; Boston University; and Harvard University looked at how far women lived from an abortion clinic while Roe was still in effect — from January 2021 to December 2021 — compared with how far women lived post-Dobbs.

Of the at least 749 abortion clinics that were operating pre-Dobbs, the team determined that women lived an estimated 27.8 minutes.

The team found that women now lived an average of 100.4 minutes from a facility, which could equate to living hundreds of miles away.

Results showed there were racial/ethnic disparities. Black, Hispanic, and American Indian women who had to travel 60 minutes or more increased disproportionately by almost 25%.

The authors note this is especially concerning because communities of color in the U.S. have a higher rate of death due to pregnancy- or delivery-related complications compared to white women.

There were also disparities when it came to geography. Women living in states that subsequently banned or severely restricted abortion after Roe was overturned saw the greatest effects, according to the study.

For example, in Texas — where a trigger ban was implemented after Roe fell — travel to a clinic increased by almost a full workday, defined in the U.S. as eight hours.

Similarly, in Louisiana, which also had a trigger ban go into effect, women in the state have to travel seven hours to get to the nearest facility.

Those without a high school diploma, internet subscription, health insurance, and were of lower income were also significantly affected, the study said.

“Throughout the U.S., especially heavily in the South, access is insufficient now,” co-author Benjamin Rader, MPH and PhD candidate from Boston University’s department of epidemiology, told ABC News. “Acceptable access to specialty care within 60 minutes is criteria built by the government, and that’s what we used in the study. Millions of women in the U.S. lost acceptable access to care. There are disparities in who lost access to care. Understanding the disparities are important. Most affected are people that live in states with bans.”

Some limitations of the study include not considering air travel as a means of transportation, which excludes the states of Alaska and Hawaii.

What’s more, the study only examined the physical locations of abortion clinics and did not consider telemedicine visits or mail-ordering medication.

It comes after a data set shared exclusively with FiveThirtyEight showed that two months after the Court’s decision, there were 10,570 fewer abortions compared to estimates pre-Dobbs.