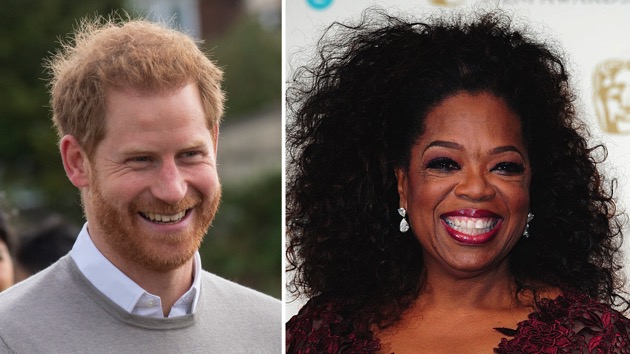 (NEW YORK) — The trailer for Prince Harry and Oprah Winfrey’s mental health documentary series The Me You Can’t See is here.

On Monday, Apple TV+ dropped the first look at the upcoming docuseries, which premieres this Friday. The Me You Can’t See was both co-created and executive produced by the Duke of Sussex and the talk show legend.

The trailer gives viewers a look at the high-profile guests who join Harry and Winfrey to discuss emotional well-being, including Lady Gaga, Glenn Close and Zak Williams, son of the late Robin Williams, among others.

“All over the world, people are in some kind of mental, psychological, emotional pain,” Winfrey says at the beginning of the trailer.

Harry then asks her which words she has heard people use when describing someone with mental health struggles, saying he has often heard “crazy” in reference to them.

“Lost it. Can’t keep it together,” Winfrey replies. “With that stigma of being labeled ‘the other,’ the telling of the story, being able to say, ‘This is what happened to me,’ is crucial.”

Both Harry and the iconic TV personality will be sharing their own stories, with Winfrey shown getting emotional at one point in the trailer.

“To make that decision to receive help is not a sign of weakness,” Harry says. “In today’s world, more than ever, it is a sign of strength.”

Also featured on the series are chef Rashad Armstead and Olympic boxer Virginia “Ginny” Fuchs as well as NBA stars DeMar DeRozan and Langston Galloway. Everyday people also join in to have open and honest conversations.

Winfrey and Harry partnered with 14 mental health professionals and organizations around the world for the series.

At the end of the trailer, the royal touches upon the lasting impact COVID-19 pandemic will have on society, saying, “The results of this year will be felt for decades” by “everybody.”

Back in March, Harry sat down with Winfrey to discuss why he and Meghan, Duchess of Sussex, decided to step back from their roles as senior, working royals and move to the U.S. with their son, Archie.

In the tell-all, Meghan — who is pregnant with the couple’s second child, a baby girl, and who also appeared in the trailer for The Me You Can’t See — opened up about suicidal thoughts she had during her time in the royal family.