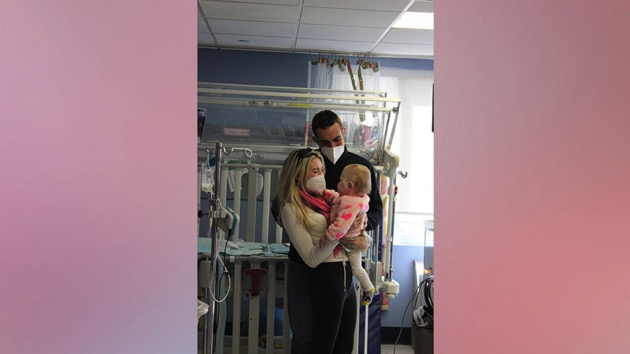 (BOSTON) — A Massachusetts toddler who weighed just over one pound when she was born at 25 weeks is home after spending the first 19 months of her life hospitalized.

Bradi Foster, of Plymouth, Massachusetts, was greeted with cheers and bubbles from her doctors and nurses when she left Franciscan Children’s, a hospital in Boston, this month with her parents, Darlene and James Foster.

The toddler was born on Aug. 9, 2020, in an emergency cesarean section after Darlene Foster suffered a placenta abruption, which is when the placenta separates from the wall of the uterus, according to the Centers for Disease Control and Prevention .

Bradi spent her first several months fighting for her life in the neonatal intensive care unit at Beth Israel Deaconess Medical Center in Boston, where she was born.

“I think they said it was around 40% chance of survival,” James Foster said of his daughter’s condition at birth. “Her lungs were not fully developed so she needed a lot of assistance just breathing and regulating her oxygen.”

The Fosters, also the parents to three older daughters, ages 6, 4 and 3, recalled having to wait nine days after she was born to even hold Bradi.

“It was scary,” Darlene Foster said. “She was smaller than our hands.”

In Bradi’s first months of life, she underwent heart surgery and battled a number of infections and lung and gastrointestinal issues, according to her parents.

Because Bradi was born early on in the coronavirus pandemic, the Fosters said they were typically allowed to have just one person with her at the hospital, an approximately 75-minute commute from their home.

“It was the toughest thing leaving our house to go to Boston to go see her and then have her sisters be like, ‘We want to go too. We want to see our sister,"” Darlene Foster said. “And some of the times I would just watch her in her little isolette and just look because she was sometimes too sick to hold.”

In January 2021, at just 5 months old, Bradi became so sick she had to be placed on an extracorporeal membrane oxygenation, or ECMO, machine, which removes carbon dioxide from the blood and sends back blood with oxygen to the body, giving the heart and lungs time to heal.

That same week, in a hospital across the street, Darlene Foster’s dad died after battling COVID-19.

“We had to say goodbye to him … and we were so sure that it was it for her,” she said, referring to Bradi’s critical condition.

Darlene Foster said that while she was at her dad’s funeral, she was notified by the hospital that Bradi had taken a turn for the better and would be taken off the ECMO machine.

From there, according to the Fosters, Bradi’s condition began to improve.

In July 2021, she was transferred to Franciscan Children’s, a post-acute rehabilitation hospital, where she continued her recovery.

After a tracheostomy was performed and Bradi no longer had to be on sedatives to keep her breathing tube in place, the Fosters said they saw their daughter come alive.

“We finally got to see her smile. Her eyes opened and she wanted to play,” Darlene Foster said. “We completely got our baby as soon as she got her trach.”

In the 19 months she spent hospitalized, Bradi underwent around 10 major surgeries and a dozen smaller ones, according to the Fosters.

Now that she is home, Bradi still has a tracheostomy tube and a gastrostomy tube (g-tube) for nutrition, but her parents said they expect both will be removed in the near future.

“We definitely have high hopes that she will be a normal kid, but it’s just going to take a little bit longer for us to get all those things out and progress her to where she should be for her age,” said James Foster. “But we definitely believe that she will be fully capable.”

Describing Bradi’s personality, he added, “We can’t believe how happy she is. After all of this experience that she’s had in life, she’s remained such a happy soul.”

When she arrived home for the first time, Bradi got to see her sisters for just the second time in her life.

“It is the best feeling in the world,” Darlene Foster said of having their family of six home together. “We just want to give hope to any other NICU parents, that there is a light at the end of the tunnel.”

WHO monkeypox expert details challenges, next steps in emergency preparedness

Child dies from suspected case of brain-eating amoeba in Nebraska, the state’s first