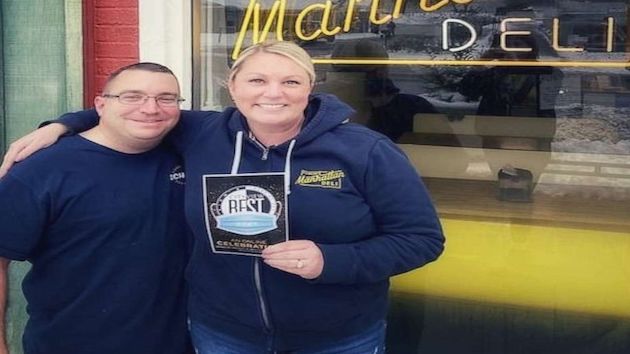 (WASHINGTON) — It only took one day for customers to begin walking into her Des Moines, Iowa, deli without a mask after Gov. Kim Reynolds lifted the state’s mask mandate.

Carey Hansen, owner of Manhattan Deli, said it had been weeks since she had to ask customers to follow the Centers for Disease Control and Prevention’s recommended mask guidance. But immediately after Reynolds’ announcement, compliance dropped.

When she asked customers to put a mask on, they told her the governor no longer required them to do so. She countered, telling them that her shop required it, but the only backing she has now is the printed sign on her door, stating masks are required to enter.

“It felt really nice to just have it be a universal expectation that masks should be worn. And unfortunately, that’s been completely undone this week here in Iowa,” Hansen said.

Manhattan Deli was one of the restaurants to publicly announce it would continue to follow CDC guidelines, including requiring customers to wear masks and maintain social distancing, despite Reynolds’ decision on Sunday to pull back her statewide restrictions.

“I don’t currently feel like there’s been a lot of learning to be had with the early reopening,” Hansen said.

It’s a valid fear, experts say, because the U.S. has seen it play out before.

Last summer, some states prematurely pulled back restrictions before they hit the federal criteria to safely reopen, bringing on the biggest spike the country had seen at that point. Now, experts warn the same situation could happen across the country as states like Iowa and Montana lift mask mandates, New York allows stadiums to reopen, California pulls back its stay-at-home orders and Illinois allows more people to partake in indoor dining.

“It is conceivable that we are turning the corner on this. But we’ve been fooled before with different surges that came back, if you look at the pattern of the last year and a couple of months,” Dr. Anthony Fauci, President Joe Biden’s chief medical expert, said at an event hosted by Duke University on Wednesday.

He cautioned that a state-by-state patchwork of rules doesn’t work because the virus doesn’t adhere to state borders and urged state leaders to stick with a uniform approach.

“There were times when we thought things were getting under control and then it exploded again. So although we are going in the right direction, we’ve got to keep our foot on the pedal with regard to public health measures,” Fauci said.

Dr. Jeffrey Shaman, an epidemiologist at Columbia University agreed. Shaman has modeled several trajectories of the pandemic with different steps taken to prevent the virus from spreading, including restricting indoor dining and mask-wearing. He said if leaders start allowing mass gatherings in places like restaurants or in-person schooling too early, it’s more likely there could be another surge of infections.

Shaman’s research found that lifting restrictions in February could lead to 29 million more COVID-19 cases compared to 6 million cases projected if restrictions stayed in place until March, as reported by The New York Times.

He said anything that gives the virus more opportunities to jump from person to person could threaten the downward trend in cases.

“Maybe it’ll level out, or maybe it’ll even go up, depending on what people do. And so yes, that same thing that happened in the spring, the end of April as all the states began to prematurely open up their businesses without us first crushing the virus down to really low levels is potentially going to happen again,” Shaman said.

The arrival of vaccines will bolster the country’s ability to protect itself from the virus but there’s also the increasing threat of more transmissible variants.

Rochelle Walensky, the director of the CDC, said now is not the time to pull back on mitigation.

“We have yet to control this pandemic. We still have this emerging threat of variants, and I would just simply discourage any of those activities,” Walensky said at a White House briefing last week when asked about loosened restrictions.

“The continued proliferation of variants remains of great concern, and is a threat that could reverse the recent positive trends we are seeing,” Walensky said.

Across the country, new COVID-19 cases have declined from 300,000 a day in January to 100,000 a day in the first week of February. Experts have said that drop in new cases is good news, but the country is far from out of the woods.

Josh Michaud, a health policy expert at the Kaiser Family Foundation, said even though it seems things are improving since the fall, the virus is still spreading a lot throughout most of the country.

“I think that’s where some of this disconnect comes from where relatively speaking, we’re better off, but absolutely speaking we’re not in a good position and we’re not anywhere close to interrupting transmission,” he said.

Fauci has predicted the U.S. would need somewhere around 85% of the country to be vaccinated before people can return to “normalcy.” He has recommended wearing masks for the next few months as vaccine distribution increases, particularly because it’s not clear yet whether getting the vaccine keeps people from spreading the virus to others who aren’t yet vaccinated.

“When it comes to vaccinations it’s going to be a long time before we get to the point where we can be comfortable about relaxing restrictions,” Michaud said.

But in Montana, where just 4% of the state has been vaccinated, the governor lifted the mask mandate on Friday. Like Reynolds, Montana Gov. Greg Gianforte, a Republican, argued that it was not up to the government to mandate wearing masks, despite public health recommendations that doing so effectively limits the spread of the virus.

“Since we’re not out of the woods yet, I will continue wearing a mask, and I encourage all Montanans to do the same to protect themselves, their loved ones and their neighbors,” he said.

In Iowa, Reynolds announced she was rolling back the mask mandate and social distancing requirements over the weekend, just three months after implementing. Iowa was one of the last states in the country to call for a mask mandate in November, which Reynolds did as cases and deaths surged to the highest levels since the beginning of the pandemic.

Cases in Iowa have declined to less than 700 new cases a day in the last week, according to CDC data, but are still at the highest level since August.

“We know what we need to do, and it doesn’t require a government mandate to do it. Prior to November, Iowa didn’t have a mask requirement, but most Iowans wore a mask. And I’m confident that they will continue to do so,” Reynolds told reporters at a press conference last week.

But business owners in Iowa like Hansen have seen firsthand that people are still divided on masks and their approach to the coronavirus.

Becky Pospisal runs a do-it-yourself craft store in West Des Moines, Iowa. She said she requires masks in her store and there were zero incidents with customers while the state mask mandate was in place, but now that it’s been lifted she’s worried her employees, some just out of high school, will have to confront customers who refuse to wear masks.

“It’s just one more thing we have to worry about. And I feel like it’s as simple as asking people to wear a shirt in our store,” she said.

She said wearing masks has become linked with political affiliation in Iowa, especially as Reynolds appeared at rallies with unmasked crowds to support Trump and other Republicans before the election.

Pospisal said she doesn’t understand why state leaders are not following guidelines based on research and advice from medical experts.

Shaman said some people will argue against a requirement to wear a mask or penalty for violating a mandate, but there’s more of a risk from sending a message that masks are optional.

“If you make it voluntary … fewer people are going to comply with the measures. And that has to be part of your calculus as to when you do that, when you relax from a requirement to a suggestion,” he said.

CDC research has shown that masks decrease the spread of the virus and that universities and states with mask mandates saw higher rates of correct mask wearing and fewer new COVID-19 cases and hospitalizations.

Biden has tried to rewrite the narrative around wearing masks, which experts say is a good start, but outside of setting an example and sending a message, the federal government has little authority to control state or local leaders’ decisions around mask mandates or other policies outside of providing data and offering guidance.

The CDC is likely to publish new guidance under the Biden administration on when states can safely lift restrictions, including how officials should look at case numbers, monitoring for new variants, testing and contact tracing.

But ultimately it may fall to individuals and businesses to keep up the behaviors that can slow the spread of even the more contagious variants of the virus by wearing masks, washing hands and avoiding indoor gatherings.

In Des Moines, the mayor has pushed back on the governor’s decision by issuing a citywide mask mandate, hoping to keep mask-wearing up in Iowa’s capital city even if other parts of the state falter. And for Pospisal, the owner of the DIY shop in Des Moines, that feels like not only the right choice, but also the financially sound choice.

“It’s working. People feel safe here. If I take that away, maybe people won’t feel safe here and maybe they won’t come back to my business,” she said. “So, most of us aren’t changing a thing.”