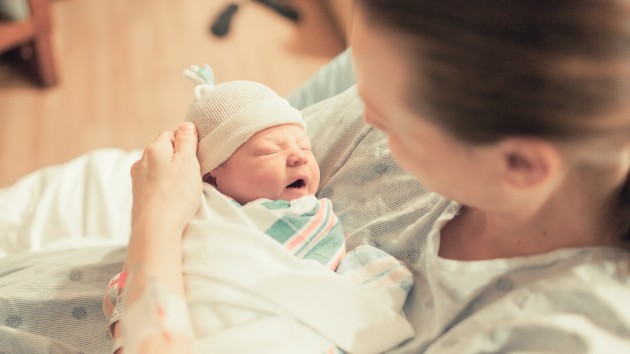 (NEW YORK) — A mother of two is addressing postpartum well-being and the care she says women actually need.

“Birth is a major trauma to the body,” Jesse Truelove of Guymon, Oklahoma, told ABC News’ Good Morning America. “Not only a C-section, because that’s obviously a major abdominal surgery, but giving birth vaginally is major trauma. There’s stretching and tearing of ligaments and connective tissues, and you also carried a baby for nine months.”

Truelove is a prenatal and postpartum core and pelvic floor exercise specialist. She’s also head coach of the Move Your Bump app and a Postpartum Ab and Rehab workout course.

Her career choice was sparked by her experiences delivering her two daughters, she said.

“In one day, everything changes because you don’t have the pressure of the baby pressing up against your belly,” Truelove said. “It takes very specific training and procedures to come back from that…but for some reason, our society puts this magical number on it of ‘six weeks.’ The idea of even having sex at 6 weeks can be terrifying as a woman [postpartum].”

Pending the body’s healing process, healthcare providers will typically clear women at their six-week checkup, at minimum and based on the method of childbirth, to have intercourse and commence physical activity such as exercise unless otherwise instructed by a doctor.

What should change, according to mothers and experts

In 2018, the American College of Obstetrics and Gynecology (ACOG) announced its goal to optimize postpartum care, which is what experts call the “fourth trimester” — a period of time where women are recovering from birth, a major medical event, while grappling with the emotional and physical challenges that come with caring for a newborn.

Sacks went on, adding how the maternal mortality rates are shockingly high in the United States when compared to economically similar countries, and even higher for women of color.

“So, this is a recommendation is response to both addressing the mental health issues that come up in those first in that first month postpartum, including PMADs [perinatal mood and anxiety disorders] but also physical conditions…[such as] issues around bleeding or blood clots. If they go unmanaged, in the first three weeks, [it] can be disastrous. It’s not just mental at all,” she said.

Truelove gave birth via C-section twice. She said the first two weeks after, her husband had to help her get around — being that C-sections are a major surgery.

“It’s really important to remember that everybody goes through recovery differently,” Truelove said.

On May 11, Truelove released an Instagram reel calling out many obstetricians who will give the “all clear” [for sex] amid the postpartum period. Many sounded off on the topic in the comment section.

“I just got the 6 weeks all clear via phone appointment,” one woman wrote. “I wasn’t even asked any specific questions about how I was doing. Pretty much confirms how meaningless it was.”

“At 6 weeks my doctor told me I was cleared when I felt ready and that it was all my decision,” another commented.

“Six weeks turned into six months for me,” said one mother.

During her postpartum stage, Natasha Eidson, also from Guymon, Oklahoma, trained with Truelove.

Eidson, mom of a 1-year-old, told GMA she is due in a few weeks to have her second child.

She described her first birth experience as “painful” and “traumatic.” Eidson said she pushed for several hours and had vaginal tearing amid the delivery.

“We talk about it a lot, hearing the doctor say you’re cleared to do all these things and I’m like, ‘Am I though?"” Eidson said. “I still remember feeling the tears swell up in my eyes and asking, ‘You’re literally telling me I can go back to work?"”

Eidson said she took two additional weeks before fully returning to work. She also took a postpartum questionnaire amid her postpartum checkup.

Eidson said she experienced postpartum depression and was offered a prescription for antidepressants, though she felt it wasn’t the best option for her.

“Being around people, I think truly is what helped me the most,” she added. “And being around other people who just went through this. My wish to women is do whatever makes you happy…it’s OK to ask for help, whether that’s from a doctor, friend or family member. That awareness needs to be there more.”

Sacks said women with postpartum depression should be treated by a professional.

Sacks said about 80 percent of women in the first two weeks after delivering a baby will experience what is known as “the baby blues” — a self-limited experience that often goes away on its own. A mother with baby blues may be more nervous or tearful than usual, experience mood swings and it’s the “least severe form of postpartum depression,” according to the American Pregnancy Association.

“It’s an immediate crash in the hormones of estrogen and progesterone that are elevated during pregnancy,” Sacks said. “And so, some theories suggest that the baby blues has a lot to do with the hormonal adjustment.”

Sacks said some women breastfeed, which causes another major hormone shift with the rise of oxytocin.

There are other biological changes that impact your hormones too, like sleep deprivation, physical pain after giving birth, an identity transition as a parent and adjusting to having a new child to care for.

Women may have postpartum mood and anxiety disorders, which are clinically diagnosable mental health issues and require treatment.

Around 10% of postpartum women develop anxiety, according to the Anxiety and Depression Association of America (ADAA).

However, there is no category for it in the American Psychiatric Association’s Diagnostic and Statistical Manual of Mental Disorders-5 (DSM-5). Postpartum anxiety is instead often grouped under postpartum depression (Major Depressive Disorder with Peripartum onset), which affects about one in seven women, according to the ADAA.

Sacks said depending on the person and various risk factors, women can have different experiences postpartum and there’s more than just three categories of mood adjustments as they relate to identity shifts and birth trauma.

Sacks said if you have any questions about what you’re experiencing to contact your doctor.

“No woman should suffer silently or feel ashamed,” Sacks added. “And then the sooner you get help, the healthier it is for you and your family.”

Sacks said the ACOG’s recommendation for earlier care in the postpartum period is a step in the right direction when it comes to the response to physical and mental health needs.

Women are also undergoing physical changes to their bodies and can help remedy them by tailoring the aftercare.

Customized exercises can help mothers rehab the muscles that were affected during pregnancy and childbirth — something that a doctor is not solely responsible for, Truelove said.

After having a baby, women’s bladders will sometimes leak if they sneeze, cough, laugh or exercise. Truelove pointed out how this could be a sign of a dysfunctional core and pelvic floor.

While women do have the option to undergo surgery for a weakened pelvic floor, Truelove said another medical event as such, shouldn’t be the only option.

“You also deserve a body that’s functioning,” she said. “You deserve to feel confident because your body is able to do what it’s supposed to do.”

Truelove said women can improve their pelvic floor and core through functional movements, and the ACOG says moms can perform those gentle exercises as soon as they feel ready.

Truelove said when a baby is in utero, the baby pushes up on the diaphragm, which doesn’t allow for deep breathing.

“It changes muscle and that lower belly pooch moms think they’re stuck with,” she said, adding that certain exercises can help correct posture and breathing after birth. “Baby is also pushing out abdominal muscles, which can stretch the connective tissues and causes the excessive diastasis and the ab separation.”

‘For moms, recovery is not a one-size-fits-all’

In addition to earlier postpartum checkups, Truelove said doctors should modernize the language they use when chatting with patients.

For example, “There’s other ways to be intimate,” she added. “And it’s not even discussed at your six-week appointment.

“You’re trying to figure out who you are now,” she added.

Prior to engaging in postpartum exercises, research your options and speak with your OB/GYN and or healthcare provider.

If you’re unsure what you’re experiencing postpartum, chat with your doctor about seeing a therapist or reach out to the Postpartum Support International helpline at 1-800-944-4773.