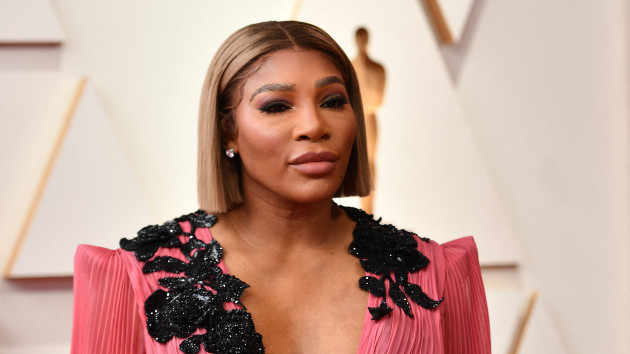 (NEW YORK) — Tennis superstar Serena Williams is describing in her own words the life-threatening complications she faced while giving birth to her daughter, and how she advocated to save her own life.

Williams, 40, gave birth to her daughter, Olympia, with husband Alexis Ohanian, in September 2017, in an emergency cesarean section.

In the new book Arrival Stories: Women Share Their Experiences of Becoming Mothers, a collection of essays helmed by Amy Schumer and Christy Turlington Burns, Williams writes, “Giving birth to my baby, it turned out, was a test for how loud and how often I would have to call out before I was finally heard.”

Williams writes in her essay, an adaptation of which was published by ELLE.com, that after her C-section, she underwent three surgeries due to complications that included an embolism, or clot, in one of her arteries, and a hematoma, a collection of blood, in her abdomen.

She describes in the essay what she remembers happening the day after she gave birth, when the complications began.

“In 2010, I learned I had blood clots in my lungs—clots that, had they not been caught in time, could have killed me. Ever since then, I’ve lived in fear of them returning. It wasn’t a one-off; I’m at high risk for blood clots. I asked a nurse, ‘When do I start my heparin drip? Shouldn’t I be on that now?,"” she wrote, referring to a drug that is delivered by IV and helps to prevent blood clots. “The response was, ‘Well, we don’t really know if that’s what you need to be on right now.’ No one was really listening to what I was saying.”

“The logic for not starting the blood thinners was that it could cause my C-section wound to bleed, which is true. Still, I felt it was important and kept pressing,” she wrote. “All the while, I was in excruciating pain. I couldn’t move at all—not my legs, not my back, nothing.”

Williams said at times she felt like she was dying, but she insisted to a nurse that she get on a heparin drip and have a CAT scan done on her lungs.

“Finally, the nurse called my doctor, and she listened to me and insisted we check. I fought hard, and I ended up getting the CAT scan. I’m so grateful to her,” said Williams. “Lo and behold, I had a blood clot in my lungs, and they needed to insert a filter into my veins to break up the clot before it reached my heart.”

The discoveries from the CAT scan led Williams to undergo her third and fourth surgeries. One week later, she was discharged from the hospital and able to go home with Olympia.

Williams writes that she believes it was because she was “heard and appropriately treated” that her life was saved.

“In the U.S., Black women are nearly three times more likely to die during or after childbirth than their white counterparts. Many of these deaths are considered by experts to be preventable,” she writes. “Being heard and appropriately treated was the difference between life or death for me; I know those statistics would be different if the medical establishment listened to every Black woman’s experience.”

The United States has the highest rate of maternal mortality among developed nations, data shows, with a growing and disproportionate impact on women of color.

Black women are more likely than white, Asian or Latina women to die from pregnancy-related complications regardless of their education level or their income, data shows.

One reason for the disparity is that more Black women of childbearing age have chronic diseases, such as high blood pressure and diabetes, which increases the risk of pregnancy-related complications like preeclampsia and possibly the need for emergency C-sections, according to the Centers for Disease Control and Prevention.

But there are socioeconomic circumstances and structural inequities that put Black women at greater risk for those chronic conditions. And Black women often have inadequate access to care throughout pregnancy, which can further complicate their conditions, according to a 2013 study published in the American Journal of Obstetrics and Gynecology.

In December, when the Biden administration issued a “nationwide call to action” on the maternal health crisis in the U.S., Vice President Kamala Harris called the “systemic inequities” that affect pregnant people of color a “matter of life and death.”

“Regardless of income level, regardless of education level, Black women, Native women, women who live in rural areas, are more likely to die or be left scared or scarred from an experience that should be safe and should be a joyful one,” said Harris. “And we know a primary reason why this is true — systemic inequities, those differences in how people are treated based on who they are, and they create significant disparities in our health care system.”