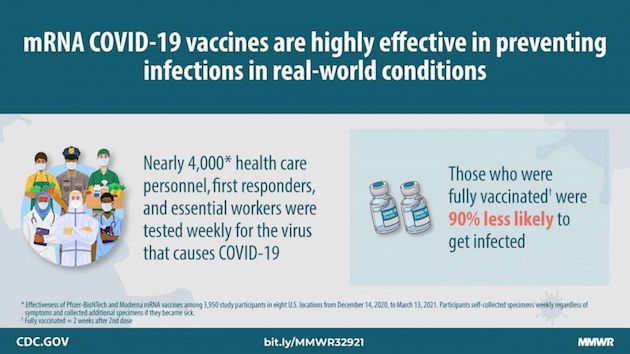 The agency studied 3,950 people who received the Pfizer and Moderna vaccines, most of whom were front-line workers and health care personnel. The vaccines were shown to be 90% effective in reducing the risk of any coronavirus infection.

The study is one of the first looks at the vaccine in real-world settings since the doses were made available to the public in December.

Dr. John Brownstein, an epidemiologist at Boston Children’s Hospital and an ABC News contributor, said the results are very promising and would be used to affect policies across the country.

“Without data, especially in the real world, there has been hesitation to put out guidance of how we act post-vaccine,” he said. “This is an important study that will help us change behaviors.”

The study followed the participants, who were in six states, over a 13-week period from Dec. 14, 2020, to March 13, 2021. Following a single dose of the mRNA vaccine, the participants’ risk of infection with the coronavirus was reduced by 80% two or more weeks after vaccination, according to the study.

Their risk was reduced by 90% two weeks after the participants received their second shot, the study said.

“This is important because preventing both asymptomatic and pre-symptomatic infections among health care workers and other essential workers through vaccination can help prevent the spread of SARS-CoV-2 to those they care for or serve,” the CDC said in a news release.

The study reaffirms the results of clinical trials for both vaccines that showed a drop in infection risk, according to researchers.

Brownstein said the findings will help with the messaging that the vaccines are safe and critical for protecting Americans from the virus.

“If people weren’t convinced, these vaccines were incredible scientific achievements, this is another point of proof,” he said.

More than 142 million doses of the Moderna and Pfizer vaccines have been administered in the U.S. as of March 29, according to the CDC. More than 49 million Americans have had two doses of the mRNA vaccines, the CDC data showed.

The study did not examine the effectiveness of the Johnson & Johnson vaccine, which does not use mRNA technology. Brownstein said that shouldn’t discourage eligible candidates from signing up for the one dose option.

The Johnson & Johnson vaccine, he noted, has shown to prevent the harshest symptoms of the virus and death and there are currently real-world studies to determine its effectiveness when it comes to asymptomatic infection.

As of March 29, more than 3.1 million Americans have received the Johnson & Johnson vaccine, the CDC said.

“By everyone getting the vaccine, it brings us closer to bringing this pandemic to an end,” Brownstein said.