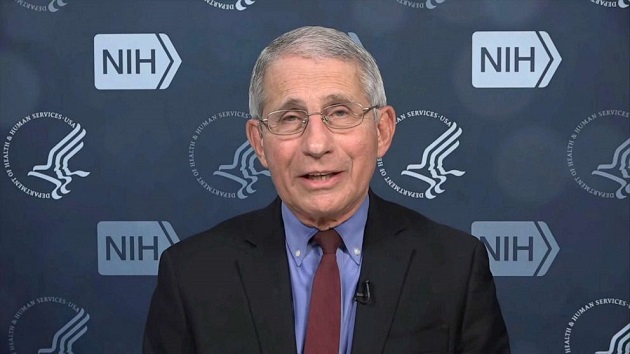 (NEW YORK) — Public health experts are warning against Super Bowl parties ahead of the big game this weekend.

“Well, absolutely not,” he said.

“I mean, watch the Super Bowl on TV, enjoy it. Have a party in your house with your family with the people who are there,” Fauci continued. “But you don’t want parties with people that you haven’t had much contact with, you just don’t know if they’re infected. So as difficult as that is, at least this time around, just lay low and cool it.”

As Los Angeles County turns a corner after a winter surge in COVID-19 cases, hospitalizations and deaths, health officials are asking residents not to risk it.

“Super Bowl parties have the power to derail our recovery and given the likelihood that there are more infectious variants circulating in our community, let’s not take chances with our own health and the health of others by creating easy opportunities for the virus to spread,” Dr. Barbara Ferrer, director of the county’s public health department, said in a statement Wednesday. “The serious consequences of gathering indoors with people outside of your household to watch the Super Bowl is just not worth it.”

Dr. Mark Ghaly, secretary of the California Department of Public Health, cautioned against gathering this weekend as well after what happened after other major sporting events in the fall.

The Dodgers and Lakers championship wins, as well as gatherings around Halloween, marked the “beginning of a surge that led to a lot of death in California — a really hard and dark period,” Ghaly said during a briefing this week.

“We now have another opportunity to keep our guard up and prevent the beginning of another story of increased cases,” he said, after updating that infection rates have dropped to under 25 per 100,000 people in over a dozen counties in California. “We want to make sure that the Super Bowl does not become that next big spread event.”

Ghaly encouraged people to watch the game with members of their household. And if they do gather with another household, to watch outdoors while keeping a distance and wearing a mask.

As the Kansas City Chiefs travel to Tampa, Florida, to play the Buccaneers, health officials in both cities have messages for hometown fans.

In Hillsborough County, where Tampa sits, officials this week asked residents to “keep their guard up” after a holiday-driven peak in COVID-19 cases. Per recommendations from the Centers for Disease Control and Prevention regarding Super Bowl parties, the county advised that residents watch with their household or virtually, and if they do have a small gathering, that outdoors is safer.

Similarly, the Kansas City Health Department in Missouri is advising residents to stick to their household and have a virtual party. But if they do gather with friends, it reminded people to wear masks, keep their distance and wash their hands frequently.

The health department also shared a “cautionary tale” of a local New Year’s Eve party, where 12 out of 13 people tested positive for COVID-19. The 13th person had mild symptoms but wasn’t tested. “They all recovered, but not everyone is that lucky,” the health department said.

In a show of unity, the mayors of Tampa and Kansas City came together ahead of the Super Bowl to talk about COVID-19 safety.

“We’re still fighting the COVID-19 pandemic as a community, and as a country,” Kansas City Mayor Quinton Lucas said in a video message this week.

“So when we celebrate the big game, let’s take precautions to limit the spread of COVID-19 so we don’t risk the lives of others,” Tampa Mayor Jane Castor added.

The leaders recommended watching in small groups “instead of squeezing into a crowded bar,” ordering takeout from their favorite restaurant and to mask up.

As far as victory celebrations, Kansas City officials have already said they won’t be hosting a parade or public celebration should the Chiefs win the Super Bowl. Castor said during a Facebook live on Wednesday that the city hasn’t made plans yet, but that we “certainly will plan celebrations that are very, very safe,” after learning lessons from festivities for the Tampa Bay Lightning’s Stanley Cup win in September.

Should racism and discrimination be viewed as public health threats? A new study argues they should