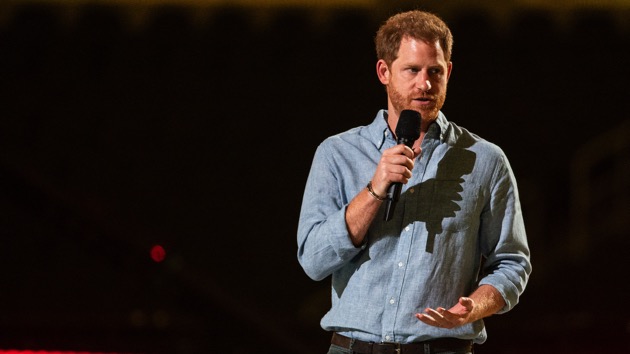 (NEW YORK) — Prince Harry, who lost his mom, Princess Diana, at age 12, is opening up about a technique that he says has helped treat his trauma.

In the new docuseries, The Me You Can’t See, which Harry co-created and executive produced with Oprah Winfrey, the Duke of Sussex invited the world into one of his private therapy sessions.

In the session, Harry is seen being guided by his therapist in eye movement desensitization and reprocessing — or EMDR, which is designed to alleviate the distress associated with traumatic memories. Harry is seen crossing his arms and tapping on each shoulder, a technique called bilateral simulation.

“With EMDR, we go back, we look at the past, we look at how your past may be affecting what’s happening to you, currently,” Wendy Byrd, EMDR practitioner and the president of EMDR International Association, told Good Morning America. “It’s changing the way the experience is stored, and when the brain changes the way it’s stored, you feel differently about it.”

The tapping that Harry does in his therapy session is part of the process to allow the brain to start storing those experiences differently, according to Byrd, who was not involved in Harry’s treatment but said she recommends EMDR therapy — one of the various techniques to treat trauma — for many of her patients.

Harry tells Winfrey in The Me You Can’t See that he needed therapy to heal himself from the past, including his mother’s death. Princess Diana passed away in 1997 after a car crash in the Pont D’Alma Bridge in Paris as she was being pursued by paparazzi.

Harry stepped down from his royal role and moved to California with his wife, Meghan, the Duchess of Sussex, and their 2-year-old son Archie last year. The duke said that living in London was a “trigger” for him.

“I didn’t want to think about her,” Harry says of his late mother in another clip. “Because if I think about her, it’s going to bring out the fact that I can’t bring her back and it’s just going to make me sad and I just decided not to talk about it.”

Harry says in the docuseries that he and Meghan, who are currently expecting their second child, “chose to put our mental health first” in their decision to step back from their royal roles and move out of the U.K.

Harry’s candor about his own mental health struggles — a topic not usually spoken about by senior members of Britain’s royal family — is a way to pull back the curtain on mental health.

“Stigma thrives on silence,” Harry says in The Me You Can’t See. “So as long as it thrives on silence, the best that we can all do collectively is continue to talk and share stories that are so relatable to so many people around the world.”

In the series, Harry and Winfrey share the mental health experiences of everyday people around the world as well as high-profile guests including Zak Williams, Lady Gaga and Glenn Close.

“It’s really brave to go in front of the world and talk about painful things, and show that emotion,” Byrd said of Harry’s willingness to talk about his mental health struggles. “We need more people who can do that.”