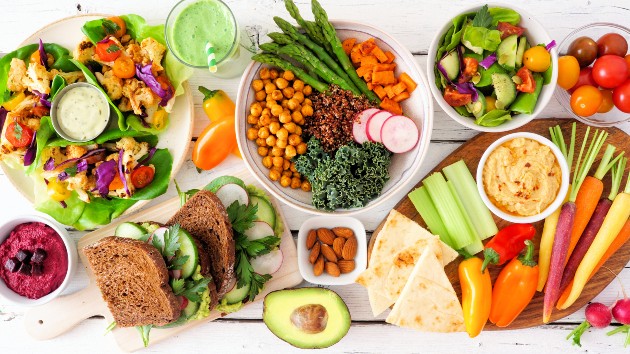 (NEW YORK) — Getting protein from plant-based sources like beans and nuts instead of animal proteins like red meat and dairy is linked to fewer deaths related to dementia and heart disease, according to a new study.

The study, published Wednesday in the Journal of the American Heart Association (JAHA), studied more than 100,000 post-menopausal women for nearly 20 years.

The women in the study who ate more protein from plant-based sources had an associated lower risk of deaths related to heart disease and dementia and a lower risk of all-cause mortality, or death from all causes, in comparison to women who ate more red meat, dairy and eggs.

Why a plant-based diet could impact health factors like dementia and heart disease is the subject of two working theories in medical and nutritional science literature, according to Dr. Jennifer Ashton, ABC News’ chief medical correspondent and a board-certified OB-GYN.

“One of them has to do with inflammatory metabolites, so these are by-products of animal protein that can then affect the heart and the brain and our blood vessels,” said Ashton, who also has a master’s degree in human nutrition. “Another [theory] has to do with the gut microbiome, that good bacteria, and obviously what we eat is related to that.”

Ashton said on ABC News’ Good Morning America Thursday that she has followed a plant-based diet for the past three weeks and has seen her bad cholesterol level, or LDL, and her body fat decrease.

“My weight stayed the same and I lost one point off that dangerous internal visceral fat, so even someone doing this just one or two days a week could potentially have some health benefits,” she said. “My advice is dip your toe in the water.”

“It doesn’t have to be all or none,” she said. “You could start with just one day of plant-based eating then maybe that will lead to two but, listen, if I can do it, anyone can do it.”

What is a plant-based diet?

A plant-based diet is a way of eating that consists mostly or entirely of foods derived from plants, including vegetables, grains, nuts, seeds, legumes and fruits.

Thomas Colin Campbell, a Cornell University biochemist, claims responsibility for giving the plant-based way of eating its name. He said he coined the term in 1980 to “help present his research on diet to skeptical colleagues at the National Institutes of Health,” according to The New York Times.

“I wanted to emphasize that my work and ideas were coming totally from science and not any sort of ethical or philosophical consideration,” he told the newspaper.

Is a plant-based diet different from a vegan diet?

Yes, a plant-based diet consists of eating few to no animal foods, while a vegan diet eliminates all animal foods and products — everything from meat and leather products to eggs and cheese, according to Fatima Cody Stanford, M.D., an obesity medicine physician scientist at Harvard Medical School.

Plant-based diets are also different from vegetarian diets, which eliminate all meat, fish and poultry, according to Stanford.

“There is a way to be healthy in any of those,” Stanford told GMA last year. “What I say to my patients is to find the best right thing for them because everyone’s body is different and everyone’s body responds differently.”

Why is there so much interest in plant-based diets?

“The information has been there for a long time, at least from a health perspective, and we’ve just helped bring it to a mass audience,” Wendel told GMA last year. “I became convinced of the health argument back in 2001 and just did it overnight. Up until that point, I had been eating animal products every day.”

More recently, another documentary, The Game Changers, has pushed plant-based diets into the spotlight. The 2019 documentary, produced by James Cameron and Arnold Schwarzenegger, shows the journey of a former MMA fighter who gives up meat.

Celebrities like Kim Kardashian West have also been public about embracing a plant-based diet, increasing interest in the way of eating.

Another factor is the argument that eating plant-based is better for the environment, according to Deirdre K. Tobias, assistant professor in the department of nutrition at Harvard School of Public Health.

“We see how much land it takes to supply and grow a single hamburger, for example,” she said. “I think that awareness has been really eye-opening for a lot of people who may have disregarded the dietary advice for health reasons.”

What are good things to eat on a plant-based diet?

Wendel, of Forks Over Knives, places an emphasis on eating whole, minimally processed foods within a plant-based diet.

“For me the best guide is does the food still look somewhat like it does when you take it out of the ground? When you cook a potato, it still looks like a potato,” he said. “The more a food is like that the more you can lean on that in your diet and lifestyle, for health benefits.”

Wendel emphasizes eating more than just vegetables on a plant-based diet to ensure you are taking in enough calories.

“Make starchy foods — beans, rice, sweet potatoes, quinoa, chickpeas –- the center of the plate because that has the energy to sustain you,” he said. “And then surround it with vegetables.”